Is the UN letter advocating the rule of Ali the fourth caliph authentic?

The following letter is viral on the internet which advocates the noble rule of the fourth caliph of Islam, So is it really coming from UN? 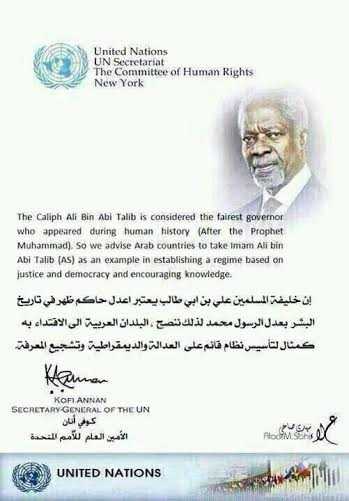 The source of the text of the above letter originates from a facebook posting by a Shia advocacy organization, which went viral from there. The text in the letter in itself does not appear in any UN archive or documents but this UN report does quote few of the sayings attributed to Ali the fourth caliph of Islam. But nothing claiming he was "fairest" governor in history of mankind and hence most likely this letter is a fabrication which uses publicly available signatures and letterheads of Kofi Annan. From historical evidences we know that only the governance of Muhammad and his 2nd caliph Umar were prominent, prosperous and set examples. The rule of Ali was marred by internal rebellion and uprisings carried over by his previous incumbent Uthman.

10
Has Angola destroyed all its mosques and banned Islam itself?
8
Did an Indian king claim to witness the moon split?
0
Are the subtitles of this video from an arabian tv program accurate with what the man is telling?
12
Do 75% of new Muslim converts in the US leave Islam within a few years?
24
Did Ataturk say that Islam is "an absurd theology" and "a rotting corpse which poisons our lives"?
8
Did all of Germany's Muslim MPs vote in favor of same-sex marriage?