Who fired the rocket that hit al-Shifa Hospital and playground in Gaza on July 28, 2014?

There are conflicting claims of who was responsible for a rocket attack on an outpatient clinic at the al-Shifa hospital and a nearby playground in Gaza on July 28, 2014

The Israeli Defence Force claimed it was Palestinian terrorists.

Aljazeera and The Blaze quote both sides denying responsibility and blaming the other.

Is there any objective evidence of whether the rocket(s) were launched by Hamas or by the IDF?

We have a few sides to this story:

The location in question is right in the middle of the Gaza strip and both sides would likely fire over that point. It should be noted that a significant portion of Hamas weapons, being improvised, fall short of their intended targets and land in the Gaza strip. Consider this incident in which a three year old Gazan girl was killed by a misfired Hamas rocket. Therefore, either side could plausibly have fired the projectile which landed in Shifa.

Israeli citizens have no evidence one way or another, they were not present so I do not see their viewpoint as being significant.

The Israeli army, as party to the conflict, would be a likely suspect. The IDF denies that they fired on the hospital, and in fact blames Hamas. That is not surprising, I'm not sure of any incidents in which the IDF said "yes, we bombed that place that we shouldn't have".

Hamas claims that the missile is Israeli in origin. This claim is supported by the fact that Hamas uses the hospital as an operation center and launches rockets from the hospital, thus one would conclude that would make it a military target for the IDF.

An independent journalist has reported that the missile which hit al-Shifa was a misfired Hamas missle. However, by the same reasoning that Gazan citizens would not know who is responsible, I don't see how the journalist could conclude that Hamas was responsible. His explanation for his conclusion is Witness: militants rushed and cleared debris which seems tentative at best.

Either side is plausible. People will believe that "the other side" is responsible no matter which side of the conflict they are on. With no remains of the projectile saved to be examined, we will probably never know.

What evidence does remain

This is a late edit. I've found the following photograph which purports to be the site of the bombing. I cannot say if it is accurate or not. Perhaps someone familiar with the types of weapons used by Hamas and Israel could make an assessment. 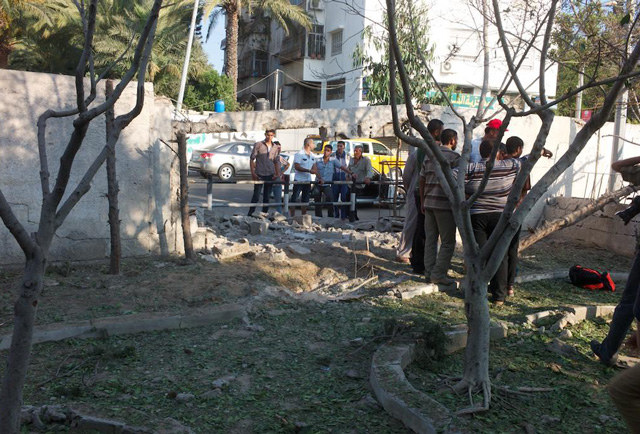 Not the answer you're looking for? Browse other questions tagged israel palestine .

4
Did Iranian state TV say that the drone attack on the tanker in July 2021 was in retaliation for an Israeli strike?