Does the "Nonstop Elevator Hack" work?

I stumbled across this claim pretty often in the last few years. 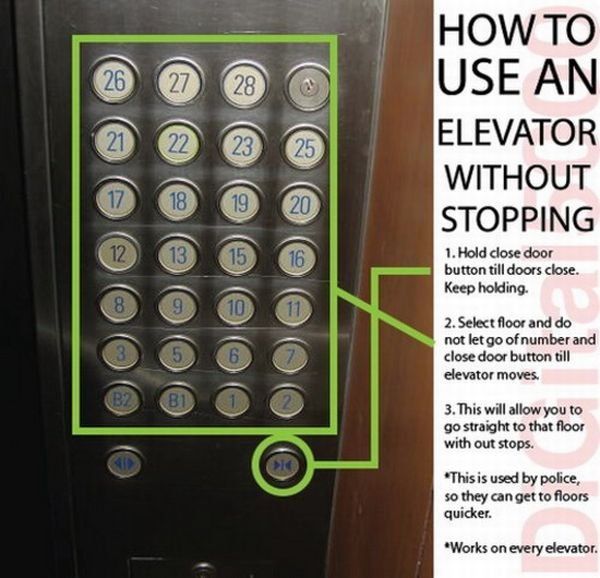 Now the problem is that I wasn't able to reproduce it but maybe it was just because I rarely visit tall buildings with multiple floors (Or I did something completely wrong, which I doubt because you just have to hold down 2 buttons).

Often you also find claims that this trick works with absolutely every elevator worldwide. Now my question:

Does it work? And if yes, are there any exceptions/limitations to it?

No, this is nonsense.

I found an article from The New Yorker, which explored that claim. They asked some lift specialists about it:

“It’s just not so,” Charles Buckman, an elevator and escalator consultant in North Carolina, said the other day. “If it happens, it’s just happenstance.” He went on, “There’s no linkage in the control system between the door-control system and the floor-call system. ”

And there's some more about it in the article.

Of course you could try it out yourself with different lifts, and chances are that some of them will bring you directly up to the floor you want, not because it works but because nobody else wanted to get on. This might then lead you to believe that it works on some lifts, even though it's really just chance.

It's an optional extra.

I've actually seen this working so I wasn't willing to accept the article linked. However I found the Specification for the Otis Elevator Company's GeN2 Regen elevator and on page 12 under the Special Functions section there is this:

NSB - Non-stop button: Once the NSB is pressed, all calls outside will not be registered, and the car moves directly to the destination floor

Additional lifts with this feature:

This proves that such a setting would be possible, and so even if this isn't true in all cases, a single elevator which had the non-stop button mislabelled as door close would be enough to start this rumour.

Not the answer you're looking for? Browse other questions tagged security elevators .

23
Do hotels omit the 13th floor?
122
Do elevator manufacturers purposefully provide a door close button that doesn't work?
3
Is it possible to suffocate if you get trapped in an elevator for a long period of time?
18
Does scam-baiting make a noticeable difference to the prevention of internet fraud?
19
Are locks as easy to pick as in the movies?
7
Is there only one known death caused by a falling elevator?
4
Does having passwords cost $200 (£150) per employee, not including the lost productivity?