Did the Free Syrian Army take a (pictured) toddler hostage?

On Al-hadath News is this picture posted: 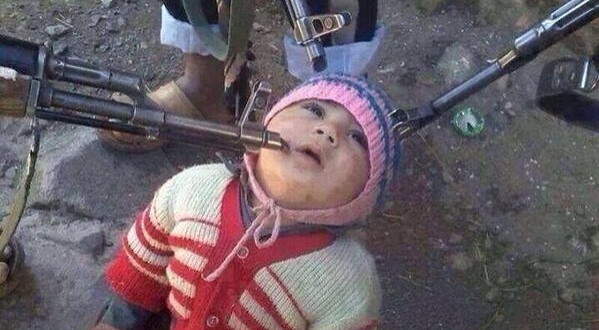 and claims that the Free Syrian Army posted this picture claiming it is "[their] youngest hostage."

Is it true that the baby was taken hostage and photographed with a gun holding its head up towards the camera, with two more guns pointed at it?

According to The Gospel Coalition - a Christian Organization that does report on the massive persecution of Christians worldwide, and which presumably would have the incentive to find this picture true, nonetheless they state this particular claim is FALSE.

There is no doubt that ISIS is persecuting the Christians in Mosul and other areas of Iraq. But almost all have already fled the city and the few that remain are continuing to leave the area. There are, however, journalists from Iraq and Western news agencies still in the city. Why have none of them taken photographs of these atrocities, or even reported on their occurrence? Why have such stories not been reported by the Christians who have fled to the cities controlled by the Kurds?

This is not to say there isn't massive persecution - Christians have pretty much been driven out of Mosul (old Ninevah, and the heart of the Christian Iraqi presence) but this direct photo is a fake.

This picture in particular showed in the context of a Syrian webpage. The article states:

The photo originally appeared online April 11, 2014 on the Facebook page of a person from Yemen. Numerous people on that page attest that the clothes the child is wearing are obviously Yemeni. A few days later, though, the image started popping up on pro-Syrian Army websites claiming that it was an Armenian child who was taken by Syrian rebels. Whatever the original context for the photo, we know based on the date alone that it was not recently taken in Mosul or northern Iraq.

14
Did global warming exacerbate the Syrian conflict?
4
Did Yasir al-Ajlawni declare that it is lawful to rape any "non-Sunni Syrian woman"?
4
Did Muhammed al-Arifi issue a fatwa permitting rape of Syrian women?
4
Did Turkey neutralize thousands of Syrian Army soldiers?
10
Did Syrian army Pantsir systems destroy 23 Tomahawks (using just 25 missiles) in an attack on Damascus?