Did Jews "take over" 73% of their land from Palestinians?

Did Israel own the lands it occupied in 1948, according to international law? Is the 73% figure correct?

Did Zionists “take over” 73% of their land from Palestinians?

"Take over" is a bit vague, and subject to interpretation. The situation is muddled enough that it is not really valid to say "yes" or "no" to that objectively.

As the question currently focuses on 1948, let's look at the immediate history lead up to, and following that period.

In 1947, the United Nations passed Resolution 181, which outlined the establishment of a legally recognized Independant Arab State as well as the state of Israel.

The Palestinian Arabs refused to acknowledge or comply with Resolution 181:

p. 396 The immediate trigger of the 1948 War was the November 1947 UN partition resolution. … The Palestinian Arabs, along with the rest of the Arab world, said a flat “no”… The Arabs refused to accept the establishment of a Jewish state in any part of Palestine. And, consistently with that “no,” the Palestinian Arabs, in November–December 1947, and the Arab states in May 1948, launched hostilities to scupper the resolution’s implementation.

After the Arab-Israeli war, the armistice agreements increased the volume of land held by Israel, but did not give them ownership. Again, "take over" is vague and arguable in this case.

The division that was supposed to occur according to Resolution 181 would have resulted in the Jewish State comprising roughly 5,500 square miles, or about 56 percent of Palestine. The Arab State was to be 4,500 square miles. Source.

In 1949, Israel wound up with control over a significantly larger area than was outlined in the 1947 UN plan, but that was the result of the armistice agreements signed by the aggressor Arab states who had attacked Israel on the day it was formed. Israel did not own this additional land, as the agreements were quite specific that the borders were temporary.

Did Israel own the lands it occupied in 1948, according to international law?

No, not really. However, the concept of international law simply did not apply to the situation in 1948.

International law applies between nations and states, and the participation of members is generally consensual. Consent is typically provided through the signing of treaties, and these treaties grant rights to International Courts to provide rulings in areas of dispute. There are numerous international bodies created by treaties adjudicating on legal issues where they may have jurisdiction. The only one claiming universal jurisdiction is the United Nations Security Council.

The UK had terminated their official oversight of the area by declaring the end of Mandatory Palestone on May 14, 1948, and therefore no international laws applying to the UK were applicable from that date, unless a new governing state or nation claiming control of part or all of the region were to sign a reciprocal treaty.

As the newly-founded state of Israel had signed no treaties with other nations regarding land-ownership.

Similarly, the Palestinian Arabs had signed no such treaties.

So, at this point, no international law applied.

Israel was recognized as a member state of the United Nations on May 11, 1949.

However, even then the legal territory was not defined. In September of 1949, the United Nations Concilliation Committee for Palestine put forth a number of recommendations regarding the establishment of a permanent regime in the area:

So, to summarize: No, the Jews did not take 73% of their land from the Palestinians. No, they did not legally own the land they occupied in the time period, but neither did the Palestinian Arabs or anyone else, as they were disputed territories not yet covered by international treaties or laws.

In 1947, the United Nations voted to partition British Palestine Mandate territory, by allotting 55% to the Jewish population and 45% to the Arab population.(1). The Palestinian Arabs and surrounding Arab states rejected the division of the land on which they had settled and lived for years.(2) (in the interest of fairness Jews were also settled and lived in that land for centuries), and the partition as designed by the UN was not implemented (3). With the Mandate 'wind-down' approaching, armed conflict between elements of the Arab and Jewish populations increased rapidly(4)

In 1948, the Jewish Agency officially announced the establishment of the State of Israel on the territory as defined by the partition plan. 5 Rejecting that fact, the armies of the five neighbouring Arab states attacked Israel. The Israeli forces defeated the attacking Arab armies and in the process gained more land.(6)

In 1949, Israel controlled 77% of the land (up from 55% as per the partition plan before the Arab states attacked): all sectors except the Gaza Strip and the West Bank. 7During these events more than half of Palestine’s native Arab population fled (mostly under urging from neighbouring Arab leaders), 531 villages were destroyed, and eleven urban neighbourhoods were emptied of their inhabitants. (8). 700,000 Palestinian Arab refugees resulted from these actions. 9

Other answers took care of "in 1948 they took over 73% of it." I would like to address the "The Jews, [...] did in fact steal the land from the Palestinians. They actually bought and paid for at most 9% of it." part which is true.

Although Estimaties of the total volume of land that Jews had purchased by 15 May 1948 are complicated by illegal and unregistered land transfers, as well as by the lack of data on land concessions from the Palestine administration after 31 March 1936. 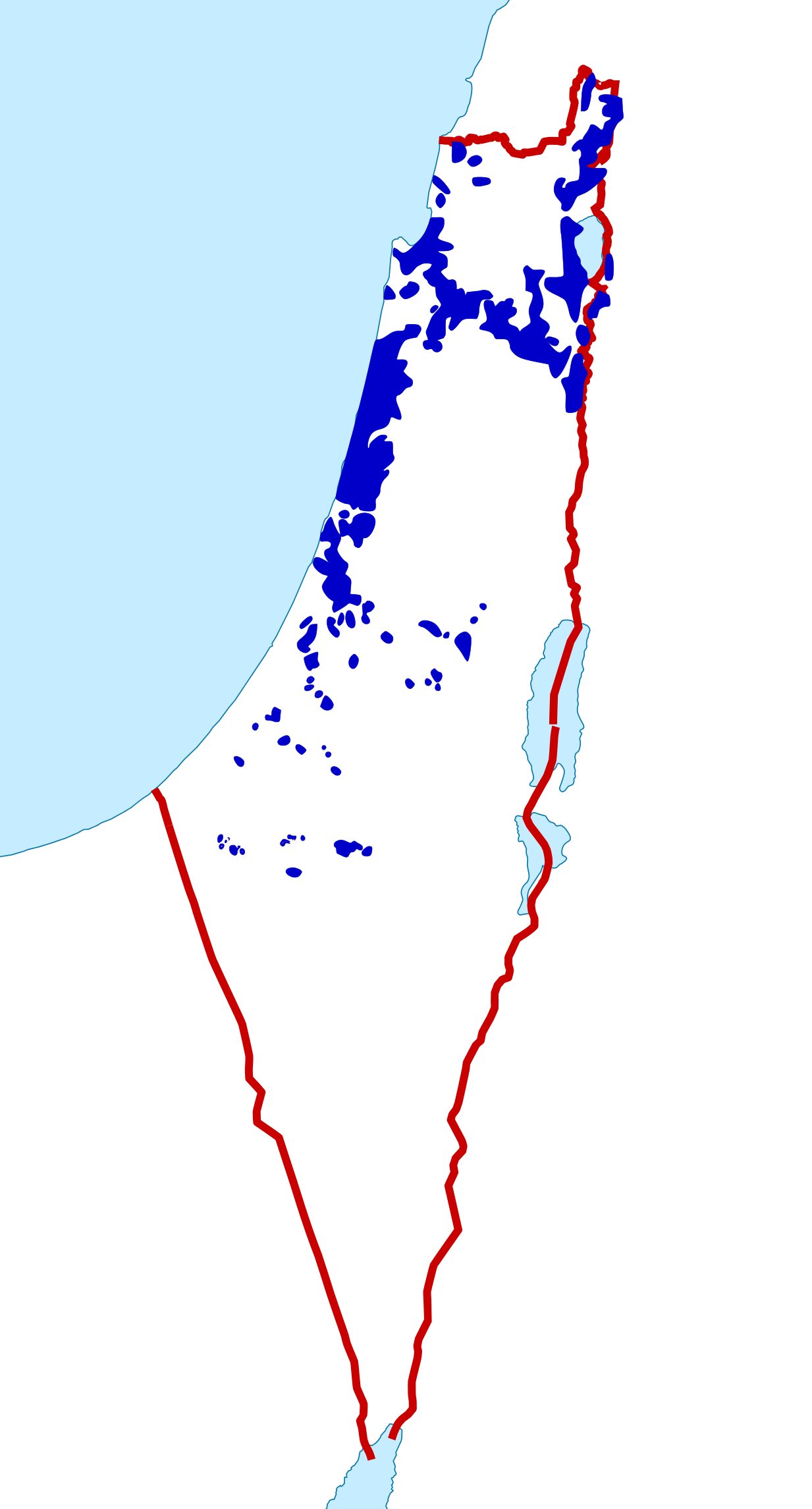 and this is a map of landownership by district: 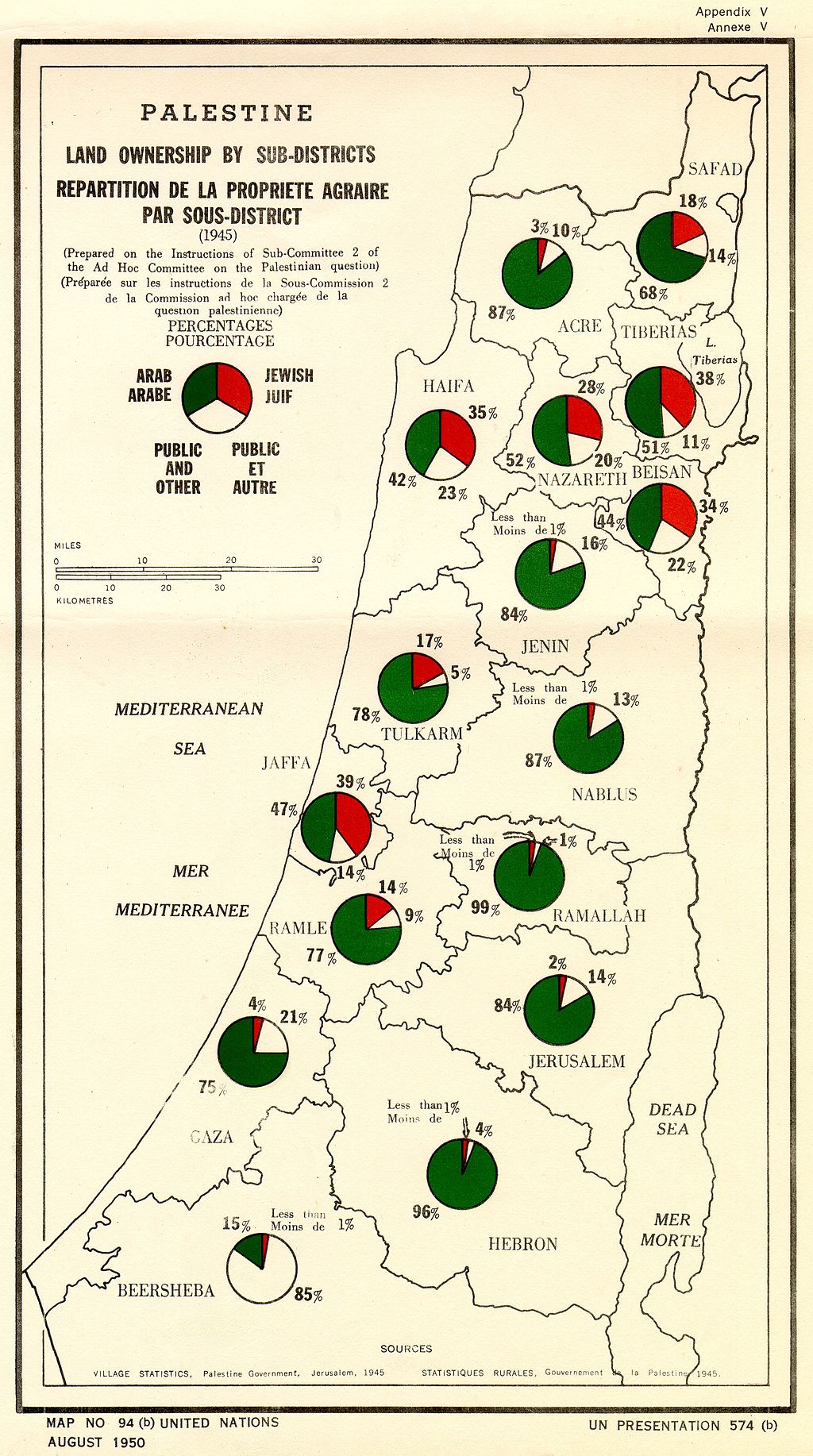 after the 1948, Israel passed a series of laws called The 'Absentees Property Law' which allowed Israel to takeover arab-owned land.

As a result, two million dunams were confiscated and given to the custodian, who later transferred the land to the development authority. This law created the novel citizenship category of "present absentees" (nifkadim nohahim), persons present at the time but considered absent for the purpose of the law. These Israeli Arabs enjoyed all civil rights-including the right to vote in the Knesset elections-except one: the right to use and dispose of their property. About 30,000-35,000 Palestinians became "present absentees".[27]

According to Simha Flapan,[28] "a detailed account of exactly how abandoned Arab property assisted in the absorption of the new immigrants was prepared by Joseph Schechtman":

It is difficult to overestimate the tremendous role this lot of abandoned Arab property has played in the settlement of hundreds of thousands of Jewish immigrants who have reached Israel since the proclamation of the state in May 1948. Forty-seven new rural settlements established on the sites of abandoned Arab villages had by October 1949 already absorbed 25,255 new immigrants. By the spring of 1950 over 1 million dunams had been leased by the custodian to Jewish settlements and individual farmers for the raising of grain crops.

Large tracts of land belonging to Arab absentees have also been leased to Jewish settlers, old and new, for the raising of vegetables. In the south alone, 15,000 dunams of vineyards and fruit trees have been leased to cooperative settlements; a similar area has been rented by the Yemenites Association, the Farmers Association, and the Soldiers Settlement and Rehabilitation Board. This has saved the Jewish Agency and the government millions of dollars. While the average cost of establishing an immigrant family in a new settlement was from $7,500 to $9,000, the cost in abandoned Arab villages did not exceed $1,500 ($750 for building repairs and $750 for livestock and equipment).

Abandoned Arab dwellings in towns have also not remained empty. By the end of July 1948, 170,000 people, notably new immigrants and ex-soldiers, in addition to about 40,000 former tenants, both Jewish and Arab, had been housed in premises under the custodian's control; and 7,000 shops, workshops and stores were sublet to new arrivals. The existence of these Arab houses-vacant and ready for occupation-has, to a large extent, solved the greatest immediate problem which faced the Israeli authorities in the absorption of immigrants. It also considerably relieved the financial burden of absorption

So,yes if you define steal as ( take without consent ) Israel did steal land from the Palestinian arabs / Israeli-Palestinians.

In the same source, we have this:

The Custodian of Absentee Property does not choose to discuss politics. But when asked how much of the land of the state of Israel might potentially have two claimants — an Arab and a Jew holding respectively a British Mandate and an Israeli deed to the same property — Mr. Manor [the Custodian in 1980] believes that 'about 70 percent' might fall into that category (Robert Fisk, 'The Land of Palestine, Part Eight: The Custodian of Absentee Property', The Times, December 24, 1980, quoted in his book Pity the Nation: Lebanon at War).

which might explain the origin of the confusion, There are 4 separate facts which were corrupted to result in your claim:

Not the answer you're looking for? Browse other questions tagged politics israel jews palestine .

35
Is this map of Israel-occupied territory accurate?
15
Did David Attenborough say that Israelis are more cruel than any animal?

25
Are Ashkenazi Jews largely descended from Khazars?
15
Did David Attenborough say that Israelis are more cruel than any animal?
9
Are there discriminatory laws against Israelis marrying Palestianians?
7
Did Palestinians from the PA with family reunification based IDs engage in terror activities, pre-2003?
15
Was the Jewish flag one of only two flags allowed in Nazi Germany?
4
Were 700000 Arab Palestinians forced out of their homes by Zionists?
5
Did the ban on Israeli travellers postdate the construction of Israeli settlements which displaced Palestinians?
28
Did Ben Gurion say this about conquering Palestinian land?