Did the Curiosity Rover take its own hands-free selfie?

Time Magazine had an article with a photographic portrait of the Curiosity Rover on Mars, attributed to NSA/JPL. 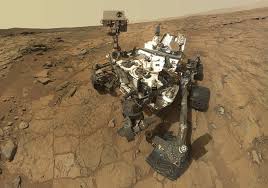 This photos seems like it would be impossible to take.

I would understand if it had used a monopod or any other extension from coming from its body, but how was it able to even take a photo including its optic lens?

I would even accept it if it used remote controlled drones (it's possible) but from how they put it, they "combined all the photos taken by the curiosity".

Huffington Post shared some explanations about how the photo was captured. The Rover had used ANOTHER arm to capture the selfies. NASA then collated the selfies to produce the image.

Here is the actual selfie taken with the camera from Curiosity's other arm.

Not the answer you're looking for? Browse other questions tagged photography nasa mars .

172
Did NASA invest a million dollars in the research of a space pen, when the USSR simply used a pencil?
25
Did Neil Armstrong find aliens on the moon?
15
How long did the crew of the Space Shuttle Challenger survive?
20
Did astronauts leave footprints on the moon?
6
Did nude pictures kick off the industry for photographs?
26
Did NASA receive a tax refund on a diamond window when it left the Earth aboard a space probe?
19
Did NASA refuse to pay a $400 fine for littering caused by the deorbiting of Skylab?
28
Did CNN use these 3 different photos of the same girl being rescued?
1
Did NASA use CGI for the Apollo mission trainers?