Do RSS satellite samples show no warming since September 1996?

On the Climate Depot is a claim that

and this graph of RSS satellite data is posted 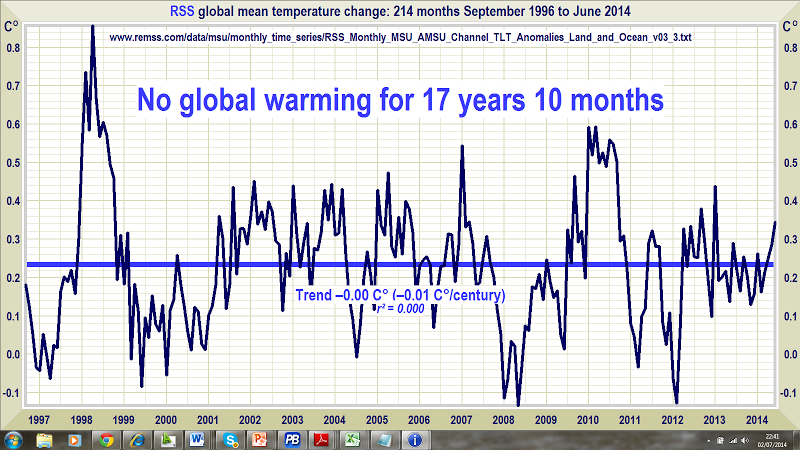 Is that graph an accurate reproduction of RSS satellite temperature samples? Is the above claim correct?

Yes, it is. You can confirm this by checking out the RSS website, and matching the similarity of the years mentioned to the full chart: 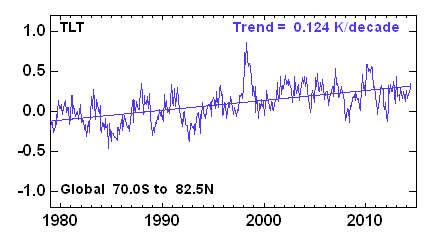 As the image shows, it's also a classic case of cherry-picking data. Make of that what you will.

While @Geobits (+1) gives a perfectly good answer to this question (i.e. it is just a clear case of cherry picking), the comments that follow suggests that some do not understand why this is such a basic statistical error, so I will expand upon this topic in my answer.

Yes, the RSS dataset does show a flat trend since September 1996, the real question is "is this surprising, or even meaningful?". The answer is "slightly, but not as much as you might think". To demonstrate why, I will also engage in some cherry picking and point out that you can also get a long period with a flat trend earlier in the time series: 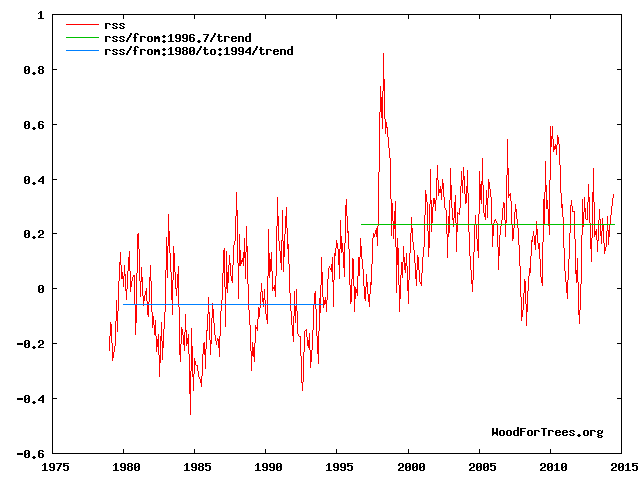 (via woodfortrees.org). Now I know that cherry picking is bad statistics, so I would not make a claim about the trend from 1980 to 1994 being in any way meaningful based on a cherry-picked trend. The reason that I am doing so is simply to demonstrate that flat trends can easily be cherry-picked from noisy time series data if that is what you really want to do.

Now the trend I have cherry picked is shorter than the one cherry picked in the diagram in the original question, but then again the one in the question has the advantage of the spike caused by the 1998 super El-nino event, which is basically what allows such a long trend to be cherry picked.

This leads me on to the second bit of cherry picking, which is why the RSS dataset (derived from satellite measurements of the lower trophosphere) rather than a surface temperature dataset? I suspect because the satellite derived datasets are more sensitive to the effects of El-Nino, which is apparent if I plot the RSS and HadCRUT4 (an instrumental surface temperature dataset) together (I've added an offset so the differences can be seen more clearly). 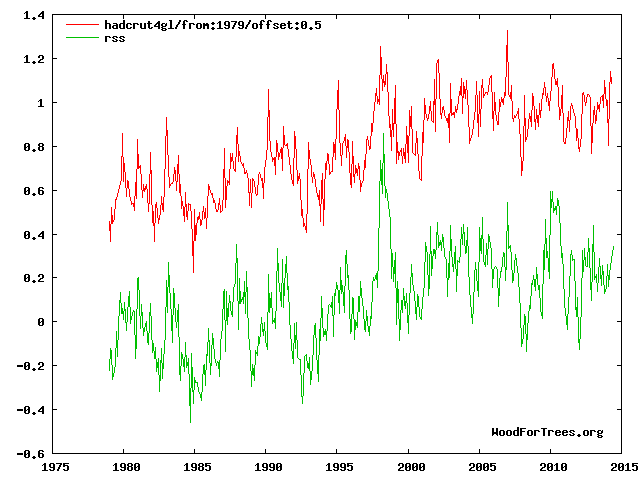 Obviously the 1998 super El-Nino spike is rather smaller in the surface temperature dataset than in the RSS dataset, and if you try and plot the trend from about September 1996, you find it is clearly upward in the HadCRUT4 dataset. 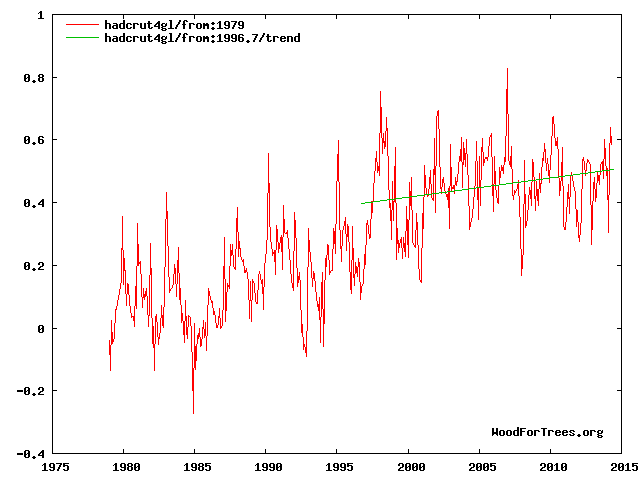 Which explains why the RSS dataset was chosen rather than HadCRUT4. Now I'm not saying that HadCRUT4 is right and RSS is wrong, what I am saying is that if someone only shows one dataset, ask yourself why. Better still, perform the analysis for all of the available datasets and see what you get.

UPDATE: It turns out that it is an even more spectacular cherry pick than I thought. The RSS dataset is derived from MSU satellite observations, however there is another dataset that is produced from the same raw MSU observations, namely the UAH dataset (produced by climate skeptic scientists Roy Spencer and John Christy). If you plot that, again, you find there is a clear upward trend since 1996 - I wonder why they chose RSS? ;o) It is shocking that the readers of skeptic blogs fall for this kind of outrageous cherry-picking and some skeptics even attack those who point out the flaws by accusing them of cherry picking! 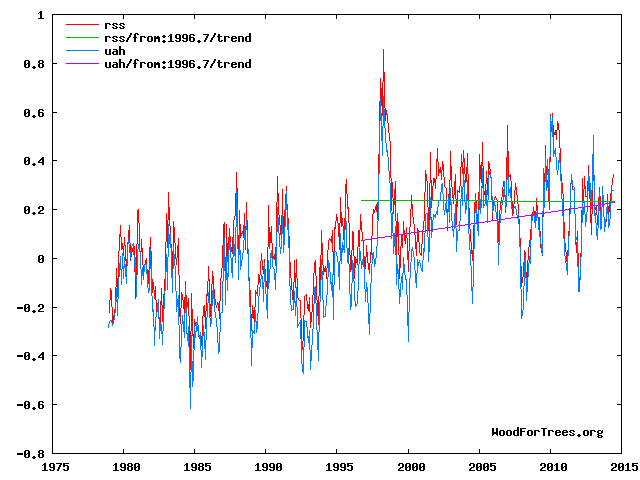 Now what does the literature say about this? Well a good start is Easterling and Wehner, which looked at flat trends in the data and in model output, and found that this sort of hiatus is not that unusual.

Is the climate warming or cooling?

1 Numerous websites, blogs and articles in the media have claimed that the climate is no longer warming, and is now cooling. Here we show that periods of no trend or even cooling of the globally averaged surface air temperature are found in the last 34 years of the observed record, and in climate model simulations of the 20th and 21st century forced with increasing greenhouse gases. We show that the climate over the 21st century can and likely will produce periods of a decade or two where the globally averaged surface air temperature shows no trend or even slight cooling in the presence of longer-term warming.

Which suggests that this sort of hiatus is not that surprising, even in the presence of long term warming due to AGW.

Does this mean scientists are ignoring the hiatus? No, of course not, it is the source of great interest for climatologists as it is an opportunity to learn more about unforced climate variability. For example, see this Nature editorial and follow references.

Does this "pause" in surface/lower-trophospheric warming mean that global warming has stopped? No. The atmosphere is only a small part of the globe, and measurements of Ocean Heat Content has shown that the oceans have continued to warm (which implies the hiatus is probably the result of a redistribution of heat between ocean and atmosphere). Diagram from here. 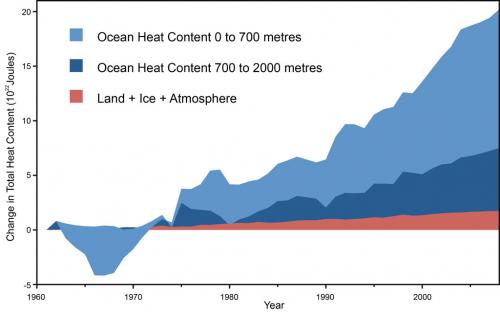 Now from a statistical perspective (I am a statistician), how do we avoid cherry picking? Well one approach would be to use "changepoint detection", which is a family of methods used to determine when there is a change in the statistical properties of a time series. I have yet to see such analysis used, where the autocorrelation in the time series is properly taken into account (which is important in assessing the statistical significance of trends). It is not that there are no good statistical approaches to this problem, it is just that skeptic blogs don't use them.

It is a shame that this kind of argument comes up again, and again, and again, in discussion of climate on blogs, given that it has been answered repeatedly, even to the extent that journal papers have been published specifically to provide a peer-reviewed response to blog misunderstandings. Please can we move on to more interesting topics, rather than keep dredging up old canards such as this?

8
Are glaciers melting?
5
Have there been 28 years of "above average temperatures"?
31
Does this graph show climate-change predictions don't meet observations?
20
Have global surface temperatures not shown significant warming since the late 1990s?
36
Are we in a low CO2 period, compared to the last 590 million years?
29
Did the US Climate Reference Network Show No New Warming Since 2005 in the US?