Did global warming cause temperatures to drop because of polar vortex episodes?

On the Environmental Defense Fund website, this claim is made:

This past winter’s polar vortex episode was caused by a persistent high pressure system that developed over western Canada, which pushed the jet stream southward.

The current summertime polar vortex episode is caused by the Super Typhoon Neoguri that hit Japan last week, which has dramatically altered the jet stream (and also created a high pressure system over western Canada).

The connection to climate change

Both of these triggers—a persistent high pressure system and a strong storm —are consistent with climate change projections by experts. Even a weaker jet stream in general is anticipated as sea ice melts in the Arctic.

"climate change projections" is linked to a page with this image: 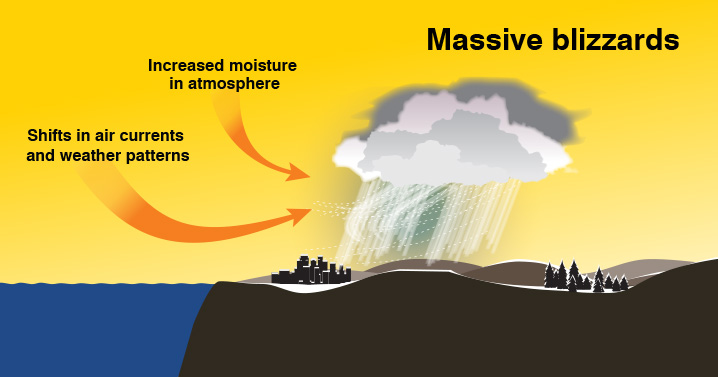 Is it true that a warming planet causes colder temperatures?

The question posed in here "Is it true that a warming planet causes colder temperatures?" is a non-sequitur, following as it does a discussion of changes in patterns of precipitation (in this case snow), rather than temperature.

The article referenced is clearly discussing changes in extreme weather (short term) resulting from climate change (in this case affecting the jetstream). These sot or changes (increases) in extreme weather are indeed discussed in the IPCC reports. See e.g. chapter 11 of the IPCC AR4 WG1 report.

Extremes: There has been a large increase in the available analyses of changes in extremes. This allows for a more comprehensive assessment for most regions. The general findings are in line with the assessment made in TAR and now have a higher level of confidence derived from multiple sources of information. The most notable improvements in confidence relate to the regional statements concerning heat waves, heavy precipitation and droughts. Despite these advances, specific analyses of models are not available for some regions, which is reflected in the robust statements on extremes. In particular, projections concerning extreme events in the tropics remain uncertain. The difficulty in projecting the distribution of tropical cyclones adds to this uncertainty. Changes in extra-tropical cyclones are dependent on details of regional atmospheric circulation response, some of which remain uncertain.

Compare this with straw man "one side claims all data and predictions are perfectly without fault" (c.f. comment by the OP above). Note that even here in the summary, the IPCC are being very careful to state defficiencies in the modelling work available and the uncertainties. I strongly recommend people obtain a copy of the IPCC report and read that, rather than climate skeptic blogs.

As to polar vortex, the models do predict there will be changes in its behaviour as a result of climate change:

Interannual variability over North America is connected to two large-scale oscillation patterns (see Chapter 3), ENSO and the NAO/AO. The MMD model projections indicate an intensification of the polar vortex and many models project a decrease in the arctic surface pressure, which contributes to an increase in the AO/NAO index; the uncertainty is large, however, due to the diverse responses of AOGCMs in simulating the Aleutian Low (Chapter 10). The MMD model projections indicate a shift towards mean El-Niño like conditions, with the eastern Pacific warming more than the western Pacific; there is a wide range of behaviour among the current models, with no clear indication of possible changes in the amplitude or period of El Niño (Chapter 10).

Again, unlike the climate change dissenters' caricature of the debate, note the clear statement of the uncertainties.

From the most recent AR5 WGI report

26
Does CO₂ cause Global Warming?
12
Do increasing global temperatures cause earthquakes?
29
Did "global cooling" have as much scientific consensus as "global warming" has now?
4
Global warming and mild winters
20
Have global surface temperatures not shown significant warming since the late 1990s?
14
Did global warming exacerbate the Syrian conflict?
25
Will global warming reduce available oxygen?
9
Is global warming impossible because of CO₂'s dilution?