There was a feeling of exhilaration and excitement on Twitter, with the Twitter account @FifNdhs called “FIFA Corruption” seemingly having predicted the final result of the World Cup final hours ahead of time. 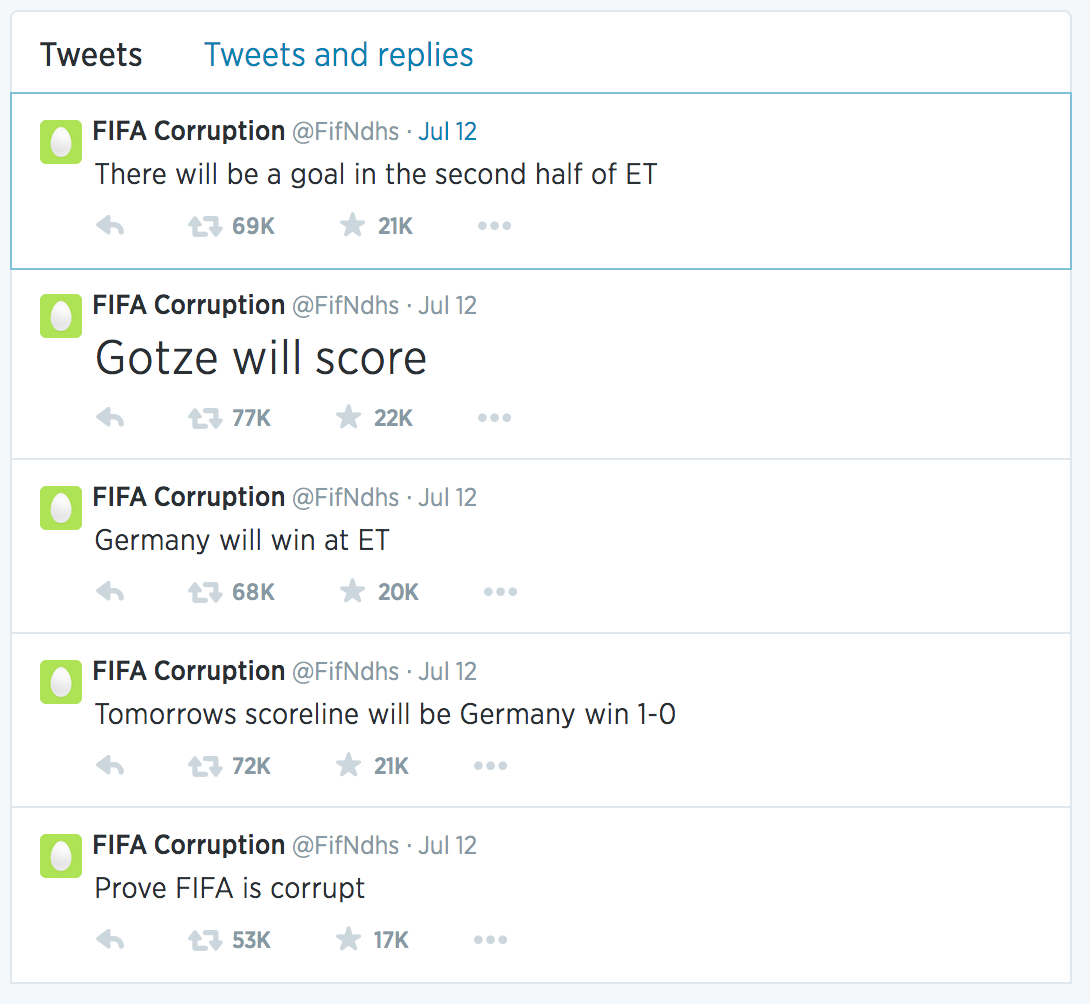 The amazing German footballer Mario Götze scored the game’s only goal in the 113th minute, as his nation became the first European team to win a World Cup in South America.

The Twitter account in question has gained 40,000 followers and even caught the attention of broadcaster Matt Le Tissier since Götze’s goal. Many of my friends and local newspapers started talking and arguing about FIFA's worst scandal ever and its corruption.

@FifNdhs's tweets were broadcast on the 12th of July and the World Cup final was held on the 13th of July. How did this happen? Does it mean FIFA is corrupt?

The account tweeted the components of every possible scenario ahead of time, then retrospectively deleted all the ones inconsistent with reality.

Many users have hinted that @FifNdhs has hidden his twitter profile before making it public.

Luckily, since his tweets were visible to many viewers, twitter user Suresh Nakhua actually managed to screenshot a bunch of the tweets before they were purged. (Suresh’s tweet) 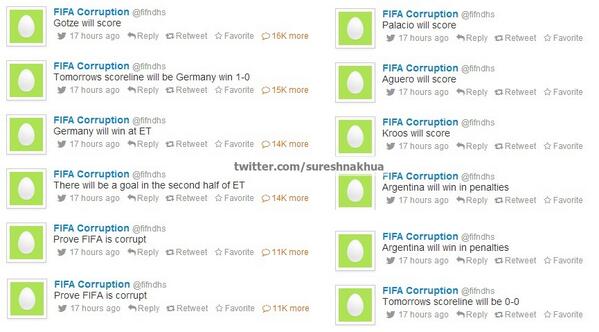 This is actually a very good trick. If he kept his twitter profile private throughout the process, it may have been more difficult to solve this mystery.

According to this article and this one, @FifNdhs is not the only account who attempted to defame FIFA, as the Twitter user @FraudeMundial14 had earlier performed a similar trick, by actually predicting Argentina’s football group.

We're going to make public Argentina’s group via this account.

In the same vein, neither is it our intention to ruin all of the expectations surrounding the World Cup draw, so we will only publish Argentina’s group.

And they did publish the group.

There are suggestions the account may have simply published all of Argentina’s group possibilities, and simply deleted the wrong ones; but there is no screenshot whatsoever of the wrong tweets who most likely got deleted.

People should have strong doubts or reservations so that they won't fooled by some social-media junkies.

Not the answer you're looking for? Browse other questions tagged sport social-media football .

6
What role did Facebook/Twitter play in the "Arab Spring"?
4
Did Germany build their own training camp in Brazil in preparation for the World Cup?
68
Did this Twitter bot predict the Paris shootings 2 days before they happened?