Are there 24 empty houses "available" per homeless person in the USA? 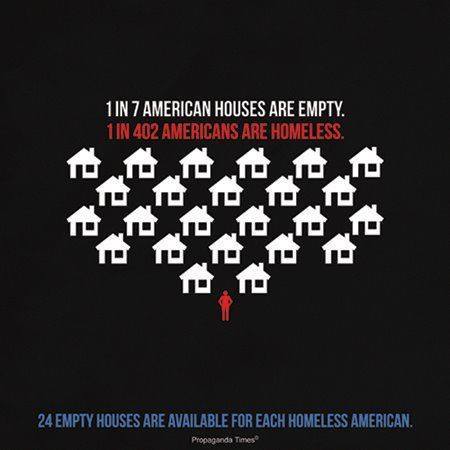 Since this question answered the ratio question, I would like to know if these houses are "available for" those homeless?

The number of homeless is debatable, because those in institutions or staying at friends' places are not counted in government reports like the Annual Homeless Assessment Report to Congress (which estimated 610,042 homeless in January 2013). This site mentions 1,750,000 homeless, presumably on 7.1.2014, but I could not find the AHAR 2014.

Some of those are summer homes, though, so using Year-Round Vacant Housing Units, we get this:

24 empty houses for each homeless American (assuming only the USA) seems like a reasonable estimate, especially since the meme is older than 3 Feb 2012.

Which is similar to the 6 mentioned in the meme in this related/duplicate question.

So the answer is NO; 24 is a rather gross exaggeration of the number of homes available for sale/rent.

Also, "houses" as depicted in the meme is an exaggeration, as according to the U.S. Bureau of the Census:

A housing unit is a house, an apartment, a mobile home, a group of rooms, or a single room that is occupied (or if vacant, is intended for occupancy) as separate living quarters. Separate living quarters are those in which the occupants live and eat separately from any other persons in the building and which have direct access from the outside of the building or through a common hall.

As for being available to the homeless, Utah cut down its homeless population by 74% by giving them free homes (in hopes of saving money on ER). And a month later, it's 78%:

In eight years, Utah has quietly reduced homelessness by 78 percent, and is on track to end homelessness by 2015. How did Utah accomplish this? Simple. Utah solved homelessness by giving people homes. In 2005, Utah figured out that the annual cost of E.R. visits and jail stays for homeless people was about $16,670 per person, compared to $11,000 to provide each homeless person with an apartment and a social worker. So, the state began giving away apartments, with no strings attached. Each participant in Utah’s Housing First program also gets a caseworker to help them become self-sufficient, but they keep the apartment even if they fail. The program has been so successful that other states are hoping to achieve similar results with programs modeled on Utah’s.

It sounds like Utah borrowed a page from Homes Not Handcuffs, the 2009 report by The National Law Center on Homelessness & Poverty and The National Coalition for the Homeless. Using a 2004 survey and anecdotal evidence from activists, the report concluded that permanent housing for the homeless is cheaper than criminalization. Housing is not only more human, it’s economical.

San Francisco's mayor's chief of homelessness policy, Bevan Dufty, had this to say:

Look, we're going to spend the money one way or another - either through expensive jail, shelter, emergency calls and so forth, or by investing in housing. It's so clear what the best way to spend it is. With housing you not only give people better lives, you save money in the long run.

That might not be the case in areas with high real estate costs and for-profit prisons, but it would be a better use of homes than demolishing them due to lack of buyers. Also, some homeless pay property taxes.

36
Are there enough unused houses in America for each homeless person to have six?

31
Do 31 US states give rapist fathers visitation rights?
22
Does Barack Obama have an aunt who was a homeless illegal alien that used government housing for 10 years?
36
Are there enough unused houses in America for each homeless person to have six?
34
In the USA, are there more African American men in prison than in college?
11
Are there any underground cities in the United States?
13
Are there 2400 bank robberies per year in the US?
14
Does an American taxpayer fund $870 in corporate subsidies for every $36 in food stamps?
52
Is there currently riots/looting *ONLY* in Democrat cities in the USA?
18
Was "their" a singular pronoun in English before the 16th century?