Did both higher temperatures and an ice age exist at CO₂ levels ten times the present?

Is it true that both higher and much lower temperatures existed while CO₂ levels were ten times higher than today?

Is it true that both higher and much lower temperatures existed while CO₂ levels were ten times higher than today?

Yes. Is that surprising? No. The reason this is not surprising is that CO2 is not the only factor controlling global temperatures, and nobody claims that it is (although it is perhaps the single most dominant factor on many time scales).

However, if you look at timescales as long as 500 million years, then solar brightening becomes an important factor. It has long been known that the luminosity of stars increases with time, the "theory predicts that the solar luminosity has risen steadily from about 70% of its current value during the last 4.7 x 109yr". This leads to a what is known as the "Feint young sun paradox", first pointed out by Carl Sagan (a name that ought to be familiar) and George Mullen. The paradox being how did the Earth remain ice free for large parts of its geological history, with so little solar irradiance compared to modern times. The resolution of the paradox being that perhaps greenhouse gasses were present in the atmosphere in larger quantities at that time (although it isn't actually quite as simple as that).

That there were warmer temperatures in the past with higher levels of CO2 is easily explained, as CO2 is a greenhouse gas, that is just what you would expect. That there could have been times when it was colder with more CO2 than today is explainable by the fact that the sun is significantly brighter now than during the Ordovician (i.e. 450 million years ago), when there was a glaciation with CO2 levels higher than they are now.

Note also the radiative forcing of CO2 only rises logarithmically in its concentrations, i.e. you get a constant increase in equilibrium temperature per doubling of CO2. Thus CO2 concentrations being 10 times higher in the Ordovician does not mean that it had ten times the effect on climate than it does now. So a substantial decrease in solar luminosity, is going to need an even more substantial change in greenhouse gas concentrations to avoid a snowball Earth.

Sadly Dr Moore is raising a question, but has taken no efforts whatsoever to find out the answer. This is not very impressive given that typing "Ordovician glaciation" into Google scholar would have provided some very relevant papers on the topic, such as

Geochemical data and models suggest a positive correlation between carbon dioxide changes and climate during the last 540 m.y. The most dramatic exception to this correlation involves the Late Ordovician (440 Ma) glaciation, which occurred at a time when CO2 levels may have been much greater than present (14–16X?). Since decreased solar luminosity at that time only partially offset increased radiative forcing from CO2, some other factor needs to be considered to explain the glaciation. Prior work with energy balance models (EBMs) suggested that the unique geographic configuration of Gondwanaland at that time may have resulted in a small area of parameter space permitting permanent snow cover and higher CO2 levels. However, the crude snow and sea ice parameterizations in the EBM left these conclusions open to further scrutiny. Herein we present results from four experiments with the GENESIS general circulation model with CO2 levels 14X greater than present, solar luminosity reduced 4.5%, and an orbital configuration set for minimum summer insolation receipt. We examined the effects of different combinations of ocean heat transport and topography on high-latitude snow cover on Gondwanaland. For the no-elevation simulations we failed to simulate permanent summer snow cover. However, for the slightly elevated topography cases (300–500 m), permanent summer snow cover occurs where geological data indicate the Ordovician ice sheet was present. These results support the hypothesis based on EBM studies. Further results indicate that although average runoff per grid point increases substantially for the Ordovician runs, the decreased land area results in global runoff 10–30% less than present, with largest runoff reductions for flat topography. This response has implications for CO2-runoff/weathering parameterizations in geochemical models. Finally, simulated tropical sea surface temperatures (SSTs) are the same or only marginally warmer than present. This result is consistent with evidence from other warm time intervals indicating small changes in tropical SSTs during time of high CO2.

That temperatures have been both higher and lower in the past and that CO2 levels were generally higher in the (geological) past. There is a good discussion of temperature and CO2 proxies at RealCLimate. Here is a noce picture of the proxy data from the IPCC AR4 (via RealClimate) 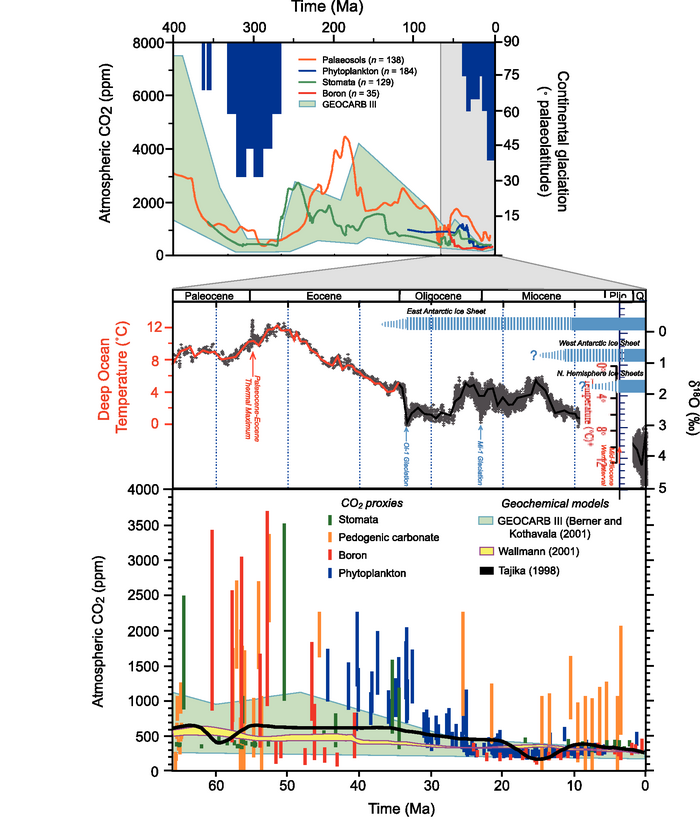 Sadly climate skeptic blogs are full of this kind of story, where someobdy has heard an apparently paradoxical combination of bits of science but not bothered to check the actual state of scientific knowledge, before rushing off to make grand claims. Google scholar however makes this fact checking relatively straightforward these days, perhaps we should ask why the likes of Moore apparently don't use it.

14
Was the cretaceous the last time atmospheric carbon dioxide was significantly higher than it is today?

19
Did the development of agriculture prevent an ice age occurring?
12
Are the specific claims from the “WSJ 16” climate skeptics true?
10
Do candles emit ten times the carbon dioxide of an equivalent lightbulb?
21
Is climate close to a “tipping point”?
10
Is the cost of preventing climate change 50 times higher than the cost of adapting to it?
48
Did the Arctic Ice Sheet grow by 60% from 2012 to 2013?
10
Were Alpine glaciers much smaller in Roman times?
29
Did the Donald Trump organization cite “rising sea levels due to climate change” in a permit request in Ireland?