Is there more global sea ice than 35 years ago?

On Mail Online, it is claimed:

In fact, across the globe, there are about one million square kilometres more sea ice than 35 years ago, which is when satellite measurements began.

Is that true? If so, is it the highest ever?

The satellite observations for the Arctic and Antarctic are available from the National Snow and Ice Data Centre (NSIDC).

Here is a plot of June Arctic, Antarctic and Global sea ice extent: 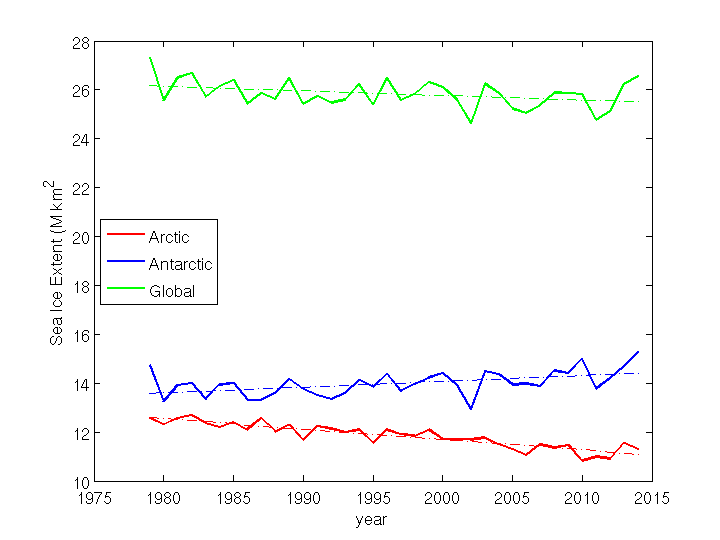 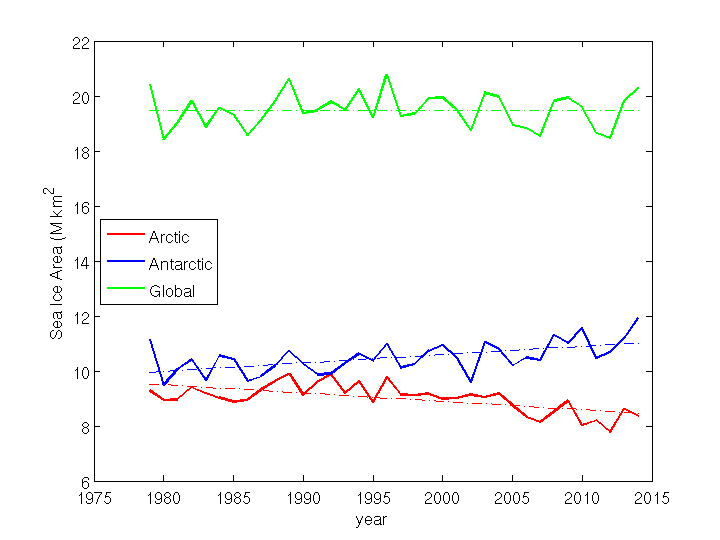 That I generated directly from those observations (using a MATLAB script).

The trend in global sea ice extent is clearly downwards over the period covered by the satellite observations, however there is some year to year variability (noise), which means that it is possible to find a start year where the current extent is higher than it was in some previous year. However that is not valid form of statistical analysis, it is just cherry picking.

@Oddthinking (+1) also makes the very good point that sea ice volume is probably a more relevant statistic if you are interested in the changes in sea ice.

See also this question at the Geosciences SE, which is concerned with why there has been an increase in Antarctic sea ice, and one answer suggests that it may in part be due to melting of the Antarctic ice cap, which is feeding fresh water into the ocean surrounding Antarctica, which promotes the formation of sea ice (presumably due to the lower salinity). If this were the case, it doesn't really support the arguments being made in the article.

I hope that @gracchus is beginning to notice a trend developing here. In most cases articles with hyperbolic claims that the worlds scientists are wrong are not borne out by even a cursory glance at the data (or often in the case of climate change, looking the issue up in the IPCC WG1 report to see if the worlds scientists actually are claiming what the article suggests, often they are not).

It is often suggested that models do not predict an increase in Antarctic sea ice. However, one paper that does suggest this is Manabe et al. (note the publication date)

In the G integration, in which the atmospheric CO2 concentration is increased with time, the thickness of sea ice over the Arctic Ocean is reduced markedly from 3m to less than 1m during the 100-year period [DM: seems likely at this stage to be a rather optimistic prediction]. Owing to the reduction of sea ice, the exchange of hear between the oceanic water surface and overlying air increases, resulting in the large increase in surface air temperature over the Arctic Ocean [DM: note model predicts rapid warming of the Arctic region, hence the importance of including the Arctic region in order to avoid bias in estimating global mean surface temperatures, c.f. Cowtan and Way]. It is surprising, however, that the sea-ice thickness in the G integration increases significantly in the immediate vicinity of the Antarctic continent despite the increase in atmospheric carbon dioxide. This is consistent with the slight reduction of sea surface temperature mentioned earlier (fig reference). It will be shown in section 9a that, owing to the intensification of the near surface halocline caused by the increased supply of water at the ocean surface, the convective mixing of cold near-surface water with warmer underlying water becomes less frequent, resulting in the increase of sea ice and slight reduction of sea surface temperature.

[emphasis mine, as are any transcription errors]

Addendum to the addendum:

Whilst looking for some data on sea ice volume for Antarctica, I found the reason they were so hard to find is that they don't exist yet, however I did find a paper on model based estimation of thickness:

Unlike the rapid sea ice losses reported in the Arctic, satellite observations show an overall increase in Antarctic sea ice concentration over recent decades. However, observations of decadal trends in Antarctic ice thickness, and hence ice volume, do not currently exist. In this study a model of the Southern Ocean and its sea ice, forced by atmospheric reanalyses, is used to assess 1992–2010 trends in ice thickness and volume. The model successfully reproduces observations of mean ice concentration, thickness, and drift, and decadal trends in ice concentration and drift, imparting some confidence in the hindcasted trends in ice thickness. The model suggests that overall Antarctic sea ice volume has increased by approximately 30 km3 yr−1 (0.4% yr−1) as an equal result of areal expansion (20 × 103 km2 yr−1 or 0.2% yr−1) and thickening (1.5 mm yr−1 or 0.2% yr−1). This ice volume increase is an order of magnitude smaller than the Arctic decrease, and about half the size of the increased freshwater supply from the Antarctic Ice Sheet. Similarly to the observed ice concentration trends, the small overall increase in modeled ice volume is actually the residual of much larger opposing regional trends. Thickness changes near the ice edge follow observed concentration changes, with increasing concentration corresponding to increased thickness. Ice thickness increases are also found in the inner pack in the Amundsen and Weddell Seas, where the model suggests that observed ice-drift trends directed toward the coast have caused dynamical thickening in autumn and winter. Modeled changes are predominantly dynamic in origin in the Pacific sector and thermodynamic elsewhere.

This would suggest that sea ice volume gain in Antarctica is subtantially less than the sea ice volume loss in the Arctic and hence there will be a global decline in sea ice volume. This would imply that the answer to the question "Is there more global sea ice than 35 years ago?", taken literally, is "no".

I've had trouble finding a direct reference that talks about global sea ice. Why? Researchers treat the Arctic sea ice and Antarctic sea ice quite differently. Adding the two amounts together to look at global trends, as the Mail Online suggests, doesn't seem to be sensible.

The US National Snow and Ice Data Center (NSIDC) have a page explaining the differences in the sea ice in the two regions, including surrounding landmasses, prevailing wind-patterns, shape and thickness, and the lifecycle of the ice.

While the data on this page is somewhat dated, it also explains the difference in the trends.

From comparing these two numbers can see the area of the ice is decreasing. [Ooh! Be careful. Some simple original research, because scientists don't seem to find this comparison useful.] We also know that the typical thickness in the Antarctic is lower, so the trend in the overall volume of sea ice is dropping. (I haven't ruled out an short-term increase; the patterns are quite variable each year.) 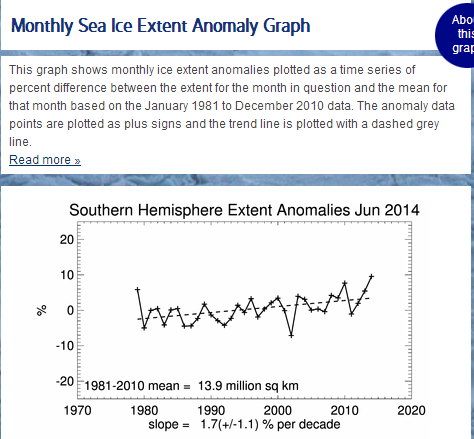 Addressing some of the other concerns in the Online Mail article, the NSIDC FAQ agrees that there is less attention of Antarctic Sea Ice

The FAQ goes on to explain that

Climate model projections of Antarctic sea ice extent are in reasonable agreement with the observations to date.

and how wind pattern changes in the area are driving the increase, and that the additional sea ice will not have a large impact on the the climate system.

Of course, if polar bear habitat is your concern, Antarctic Sea Ice extent is irrelevant.

6
Did tax and inflation consume more wealth in the 20th Century than previously produced?

27
Did we have a "global cooling" 40 years ago?
12
Are the specific claims from the "WSJ 16" climate skeptics true?
8
Are glaciers melting?
4
Is global temperature significantly affected by time of galactic year?
30
Does the phase-out of incandescent light bulbs measurably reduce overall electrical power consumption?
29
Did fertilising the ocean with 100 tons of iron sulphate increase the salmon catch by over 100,000 tons?
6
Did both higher temperatures and an ice age exist at CO₂ levels ten times the present?
8
Is there more forest in the Northern Hemisphere now than 100 years ago?
29
Did the US Climate Reference Network Show No New Warming Since 2005 in the US?