Did CNN fake footage during the Gulf War purporting a live gas attack?

The YouTube video purports to show then-CNN reporter Charles Jaco rehearse a dramatic "live" report from Saudi Arabia during the 1990 Persian Gulf War from a studio, exaggerating the level of danger.

The second part of this video was a live CNN satellite feed recorded onto VHS showing the final cut. Charles Jaco was wearing a different jacket, but he had the same act. The acting was terrible as Charles Jaco wore a gas mask, and his fellow correspondent Carl Rochelle wore a helmet. The sirens and missile sound effects are part of the stage set. The camera never pans out or shows the sky.

Did CNN really shoot a studio act, and purport it to be a real gas live gas attack?

However, as an anonymous Youtube video is hardly a credible source, I have cross-checked a couple of its claims below, and directly source them, if possible.

AluminumTheory argues it is not a blue-screen stage (as claimed by the conspiracy theorists), but just blue-coloured walls from the Dhahran International Hotel. He compares number of photos and references a newspaper article to support this.

To confirm this claim, let's start of with the nice newspaper article from The Free Lance-Star, a newspaper based in Fredericksburg, Virginia who had sent a couple of reporters to cover the war.

(The entire article is worth the read, but copy pasting isn't possible, so I retyped most of it)

A long frustrating trip to the middle east

But we owe an explanation here. It's an explanation being shared by many of the 700 journalists who joined the safari to Saudi Arabia, only to be upstaged by CNN and its uninterrupted coverage.

No doubt television has made you familiar with the Dhahran International Hotel--or at least the back side of it, where the television networks broadcast, where the Scud missiles are sighted and where the shelters are located.

They are the tops of the sun-screen shelters and cabanas surrounding the hotel swimming pool. They have that lofty look about them only because the networks have constructed tree-houselike broadcast platforms from plywood and 2-by-4s--each successive one built higher than the first--and they sit atop a miniature golf course initially designed for the enjoyment of the guests.

"I had more freedom reporting from East Berlin before the wall came down,"

Additionally it's possible to find photos of the location in Great Britain's Imperial War Museums archive: 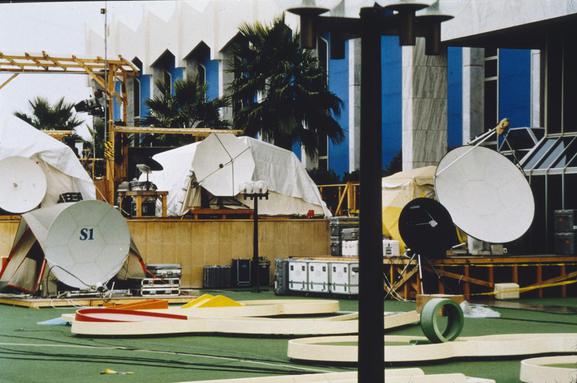 What it boils down to is that all news agencies were forced to report from the same location (as actually mentioned by Jaco himself at one point in the video). The video is consistent with that location, and is not a blue-screen stage.

AluminumTheory shows that two parts of the video, labeled "Take Two" and "Take Three" were not separate takes, but actually the exact same footage that had been duplicated to make it seem more sinister.

He shows this by laying the two sections of the video next to each other, and showing they are identical. Proving this in text and images here is a bit hard, but in the YouTube video they are overlaid pretty nicely. As this would prove a deliberate intent to falsify the information I deemed it worthwhile to reproduce this result ('peer review it', if you will):

Zooming in the waveforms overlapped to within reason of the MP3 encoding.

This is strong support to reinforce AluminumTheory's evidence that that these are not two separate takes, but the same footage manipulated.

This video is a deliberate attempt to falsify information to attract visitors for patriotportal.yolasite.com. The AluminumTheory video mentioned in the first paragraph continues with more photographic evidence, but the above three pieces of evidence were to me the most central ones, and are now properly attributed.

Another worthwhile thing about the video is that it puts into perspective the behaviour of Jaco to some extend and explain why they weren't allowed to make wide angle shots (they were right next to an airfield used by the military). Not to say that he didn't overreact in that segment, but it was a war zone after all.

The footage is real/live, as is the siren, though there wasn't actually an attack shown.

Here's an LA Times article from January 23, 1991, discussing the attack:

The issue came to a head Tuesday morning after yet another air raid warning in Dhahran. CNN turned to a live report from Charles Jaco, who, over the scream of the air raid sirens, informed viewers that he knew only that an alarm had gone off and that under new Saudi restrictions, his cameras could not show anything other than the wall behind him.

Despite the lack of either information or pictures, the CNN anchor continued to shoot questions at the obviously nervous Jaco as he stood in the open, repeatedly mopping his brow and occasionally twitching. At one point, as Jaco apparently caught a whiff of jet exhaust, he suddenly dove and slammed a gas mask over his face, handing the microphone to a colleague who, without gas mask, talked about how nervous people were and tried to reassure Jaco that his anxiety was understandable.

Interviewed later, Jaco said he had heard criticism from colleagues and acknowledged that "there were times I've blown it. . . . It disturbs me a lot, those that think I'm increasing the fear. I've got a family back home, too."

Additionally, there are records of a Scud being fired on January 23rd at 10:54 PM (You'll need to follow the citations from this link on the Wayback Machine or a similar service as the GulfLINK web server appears to be offline)

The blue screen background of the rehearsal video, is the exterior of the Dhahran International Hotel in Saudi Arabia. You can see the hotel in this live tv broadcast:
https://youtu.be/MX50H0klRXc&t=3m22s 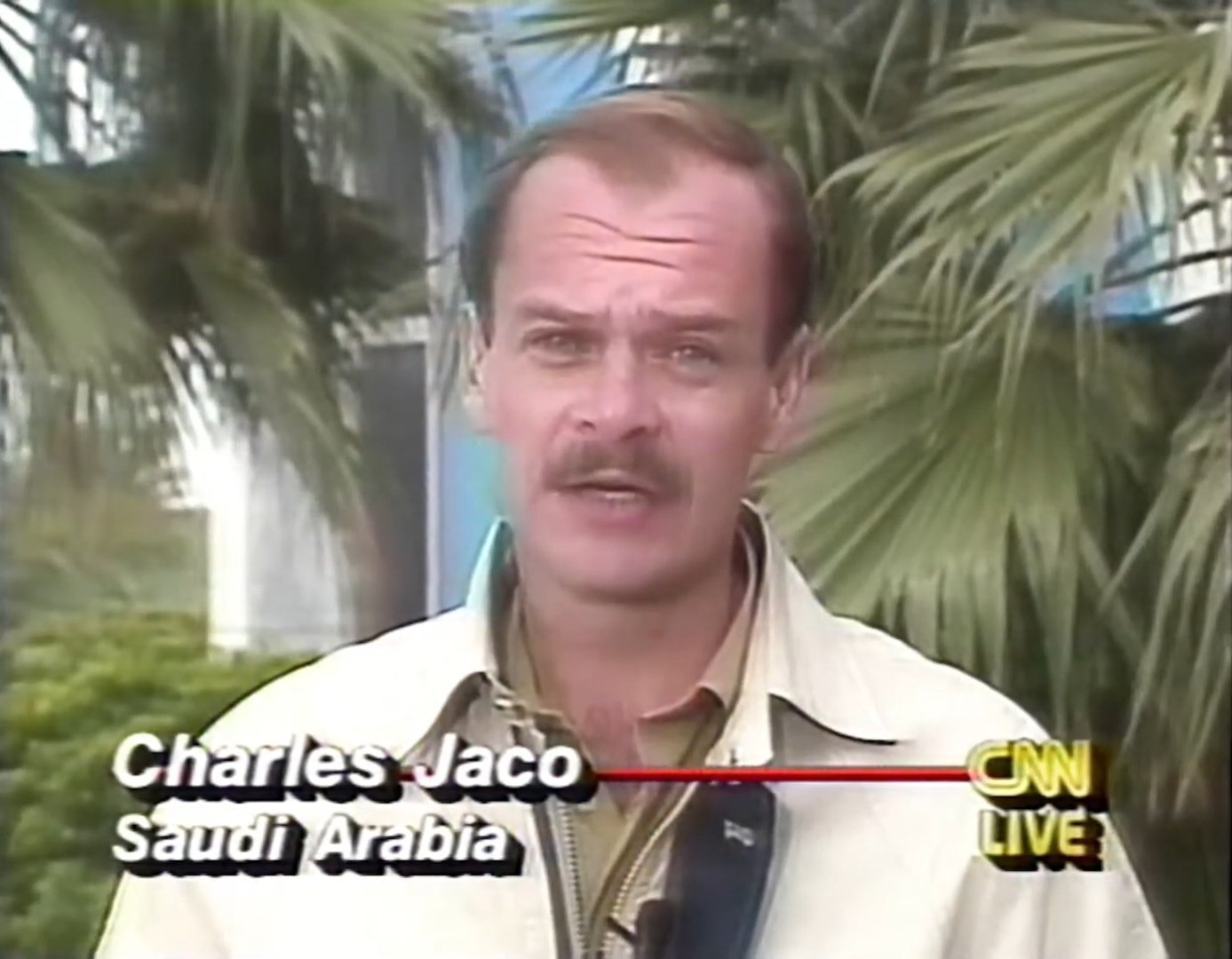 You can see the a film crew recording on a stage outside the hotel, and the blue hotel is behind them. Although the person shown is not a CNN tv correspondent, and it's not certain if this photo shows CNN (other media outlets used the same hotel) 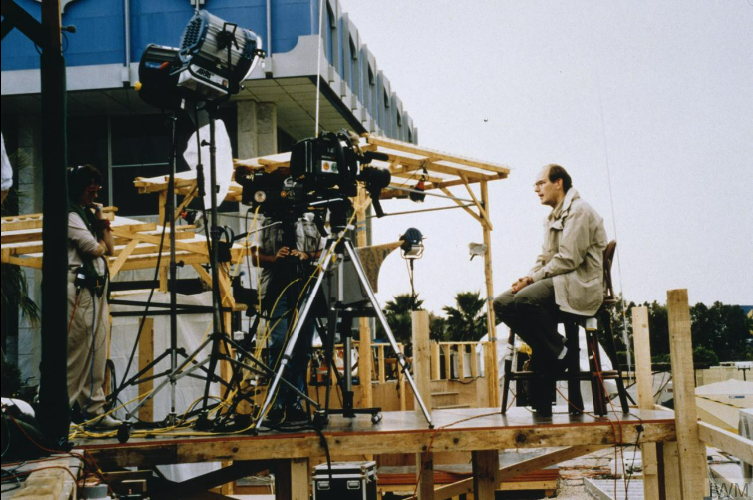 What has CNN said about the rehearsal footage?

CNN has not made any statements or given any explanation of the behind the scenes footage. Nor have they explained why Charles was rehearsing using a gas mask.

Not the answer you're looking for? Browse other questions tagged media .

30
Did journalist Amber Lyon claim that the US Government paid CNN to control content?
7
Did the BBC alter an interviewee's words to use the term 'chemical attack'?