Does the Piri Reis map demonstrate the Antarctic coast was ice-free?

The Piri Reis map is supposed to be a 300 year old map compiled from much older sources (possibly thousands of years old) that shows an accurate antarctic coastline. 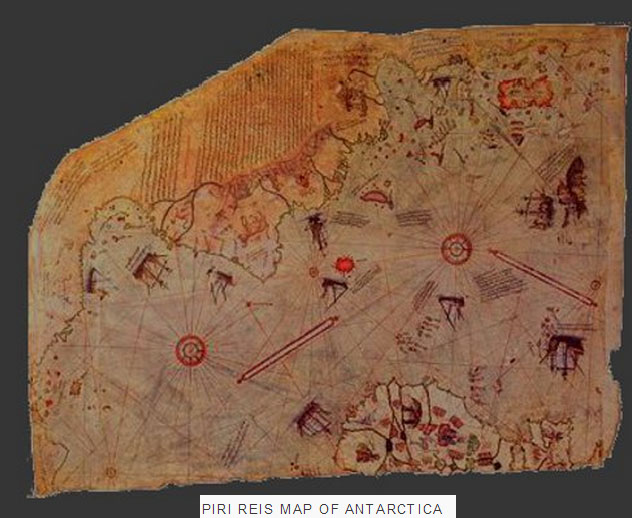 This site claims that it is clearly 300 years old but its provenance is older:

In 1929, a group of historians found an amazing map drawn on a gazelle skin. Research showed that it was a genuine document drawn in 1513 by Piri Reis, a famous admiral of the Turkish fleet in the sixteenth century.

His passion was cartography. Piri Reis high rank within the Turkish navy allowed him to have a privileged access to the Imperial Library of Constantinople. Piri Reis map The Turkish admiral admits, in a series of notes on the map, that he compiled and copied the data from a large number of source maps, some of which dated back to the fourth century BC or earlier.

The map apparently shows an accurate map of an ice-free antarctic coast:

Since it is hard to see how any known ancient civilisation could have observed an ice-free antarctic the question arises: is the map an elaborate fake? Is it even true to say it has an accurate antarctic coastline?

The authenticity of the document itself does not seem to be in question - no one seems to deny that the map dates to 1513 and is the work of Piri Reis. See Description of the Map - Page 8 of the available online sample.

The question is regarding the authenticity and accuracy of the antarctic coastline depicted in that map. The nexus of the dispute can be found in your reference:

In 1953, a Turkish naval officer sent the Piri Reis map to the U.S. Navy Hydro graphic Bureau. To evaluate it, M.I. Walters, the Chief Engineer of the Bureau, called for help Arlington H. Mallery, an authority on ancient maps, who had previously worked with him. After a long study, Mallery discovered the projection method used.

To check out the accuracy of the map, he made a grid and transferred the Piri Reis map onto a globe: the map was totally accurate. He stated that the only way to draw map of such accuracy was the aerial surveying: but who, 6000 years ago, could have used airplanes to map the earth? And this was Antartica ice free.

The Hydro graphic Office couldn’t believe what they saw: they were even able to correct some errors in the present days maps! The precision on determining the longitudinal coordinates, on the other hand, shows that to draw the map it was necessary to use the spheroid trigonometry, a process supposedly not know until the middle of 18th century.

Hapgood has proved that the Piri Reis map is plotted out in plane geometry, containing latitudes and longitudes at right angles in a traditional “grid”; yet it is obviously copied from an earlier map that was projected using spherical trigonometry! Not only did the early map makers know that the Earth was round, but they had knowledge of its true circumference to within 50 miles!

However, on the comments of that page we find the following:

Instead of concluding the map was likely made by ancients with knowledge of spheroid trigonometry, one could also go with a more mainstream explanation which reads way simpler: that this northern coastline of Antarctica is not perfectly detailed at all. For example Gregory C. McIntosh at www.diegocuoghi.com/Piri_Reis/McIntosh/McIntosh_PiriReis.htm: "it was an easy matter for Hapgood to move landmasses, adjust scales, alter orientations, rearrange landforms, redraw coastlines, twist the geographical depictions, and “correct errors” on the Piri Reis Map to match his hypothetical source maps."

It seems like a clear example of manipulating data under the influence of a strong bias. Only a cursory glance would show any fact-checker that actually there are many differences in locations, labels and orientations. The similarities do not appear to be significant enough to justify the claims.

Although I'd like to let the evidence speak for itself, it needs perhaps mentioning that Hapgood was also a spiritist involved with mediums making contact with dead people and various gods. His works needs a more cautious approach and I'd advice against using this topic to make some statement on climate change. It opens one up to way too much valid criticism.

A more sober analysis of these claims was published by Gregory McIntosh, a historian of cartography, who examined the map in depth in his book The Piri Reis Map of 1513:

...As far as the accuracy of depiction of the supposed Antarctic coast is concerned, there are two conspicuous errors. First, it is shown hundreds of miles north of its proper location; second, the Drake Passage is completely missing, with the Antarctic Peninsula presumably conflated with the Argentine coast. The identification of this area of the map with the frigid Antarctic coast is also difficult to reconcile with the notes on the map which describe the region as having a warm climate.

It should be kept in mind that maps of the period generally depicted a large continent named Terra Australis Incognita of highly variable shape and extent. This land was posited by Ptolemy as a counterbalance to the extensive continental areas in the northern hemisphere; due to a lack of exploration and various misunderstandings its existence was not fully abandoned until circumnavigation of the area during the second voyage of James Cook in the 1770s showed that if it existed, it was much smaller than imagined previously. The first confirmed landing on Antarctica was not until 1820, and the coastline of Queen Maud Land did not see significant exploration before Norwegian expeditions began in 1891.In 1513 Cape Horn had not yet been discovered, and indeed Ferdinand Magellan's voyage of circumnavigation was not to set sail for another six years. It is unclear whether the map maker saw South America itself as part of the unknown southern lands (as shown in the Atlas Miller) or whether (as Dutch thought) he drew what was then known of the coast with substantial distortion, but in any case serious scholarship holds that there is no reason to believe that the map is the product of genuine knowledge of the Antarctic coast...

No one is claiming that the map itself is "an elaborate fake". The question is simply regarding the historical and geographical accuracy of the antarctic coastline it depicts, given that in 1513 such knowledge was not available from any traditional source: Is it indeed a correct depiction derived from some unknown ancient source, or the product of "artistic license", often taken by cartographers of the period regarding "Terra Incognita".

Based on contemporary scholarship, claiming that the map is undeniably an accurate representation of an ice-free antarctic coastline during any period when it would have been possible for humans to determine such is quite far-fetched.

Not the answer you're looking for? Browse other questions tagged history geography .

201
When did people first know the Earth was a sphere?
31
Was the modern Santa Claus created by CocaCola?
26
Does Texas have the right to secede from the United States?
8
Did any U.S. president try to set up an interest free monetary system in the past?
11
Did the chief baker of the Titanic survive two hours in ice-cold water?
7
Was a 37,000-year-old elephant-skin drum found in the Antarctic?
10
Secret instructions for the German submarines for the cruise to Agartha, a hidden land in the Antarctic. Are they authentic?