Did life expectancy increase by 6 years during Great Depression?

According to Michael Mosley, life expectancy rose through the Great Depression. In his Horizon programme Eat, Fast and Live Longer he claims:

From 1929 to 1933, in the darkest years of the great depression when people were eating far less, life expectancy increased by 6 years.

Since it seems strange to me that in four years life expectancy rose by 6 years, and that this happened just during Great Depression, can anybody confirm whether it is true?

While claim that life expectancy rose from 1929 to 1933 by 6 years is true, the conclusions are far fetched.

The effects of the Great Depression on the people didn't end in 1933. In fact for the people 1933 was the middle of the Great Depression. US unemployment rate has been constantly rising from 1929 until 1933, when it has peaked at 25% (source). So if you'd expect to measure the effect on people, it would be after 1933. And indeed, life expectancy fell by 1½ years 1933 to 1934, and reached local low in 1936 at 6 years less than 1933 (source). It did not recover to 1933 levels until 1938, which happens to be the year when unemployment reached pre-Great Depression levels.

A plot of above data (male and female life expediencies): 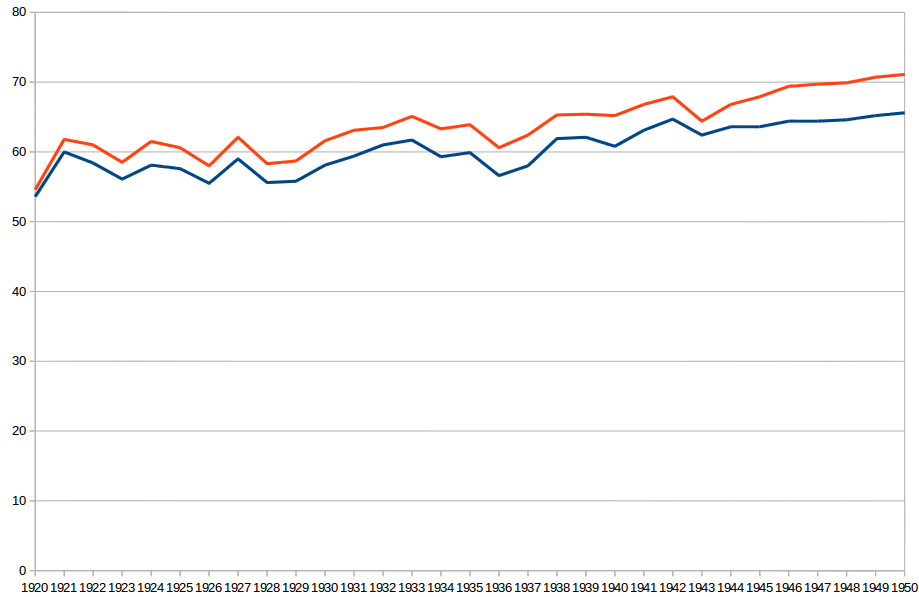 Looking at the chart, you'll notice that life expectancy did indeed increase during the Great Depression, but at a lower rate than the previous and following decades.

Not the answer you're looking for? Browse other questions tagged history united-states .

26
Was the world life expectancy only 30 years at 1900?
13
Did Alexander the Great say the following quotation?
19
Did Catherine the Great die of injuries from a horse?
6
Did Ronald Reagan's LPS Act increase homelessness in California?
29
Did Marcus Aurelius say "Live a good life"?
2
Did former president Woodrow Wilson extensively rely on Napoleon Hill's work during the World War?
13
Did Christians burn the Great Library of Alexandria?
3
Did Apollo Moon landing program cost less than lipstick used by American women during same 11 years?
17
Does the US have the highest "natural" life expectancy?
9
Are farm bankruptcies in the US "at highs not seen since the Great Depression"?