Does the Millennium Challenge Compact require El Salvador to use Monsanto seeds?

There's a story going about Facebook that claims that the United States is forcing El Salvador to use Monsanto's seeds if they want foreign aid through the Millenium Challenge program. 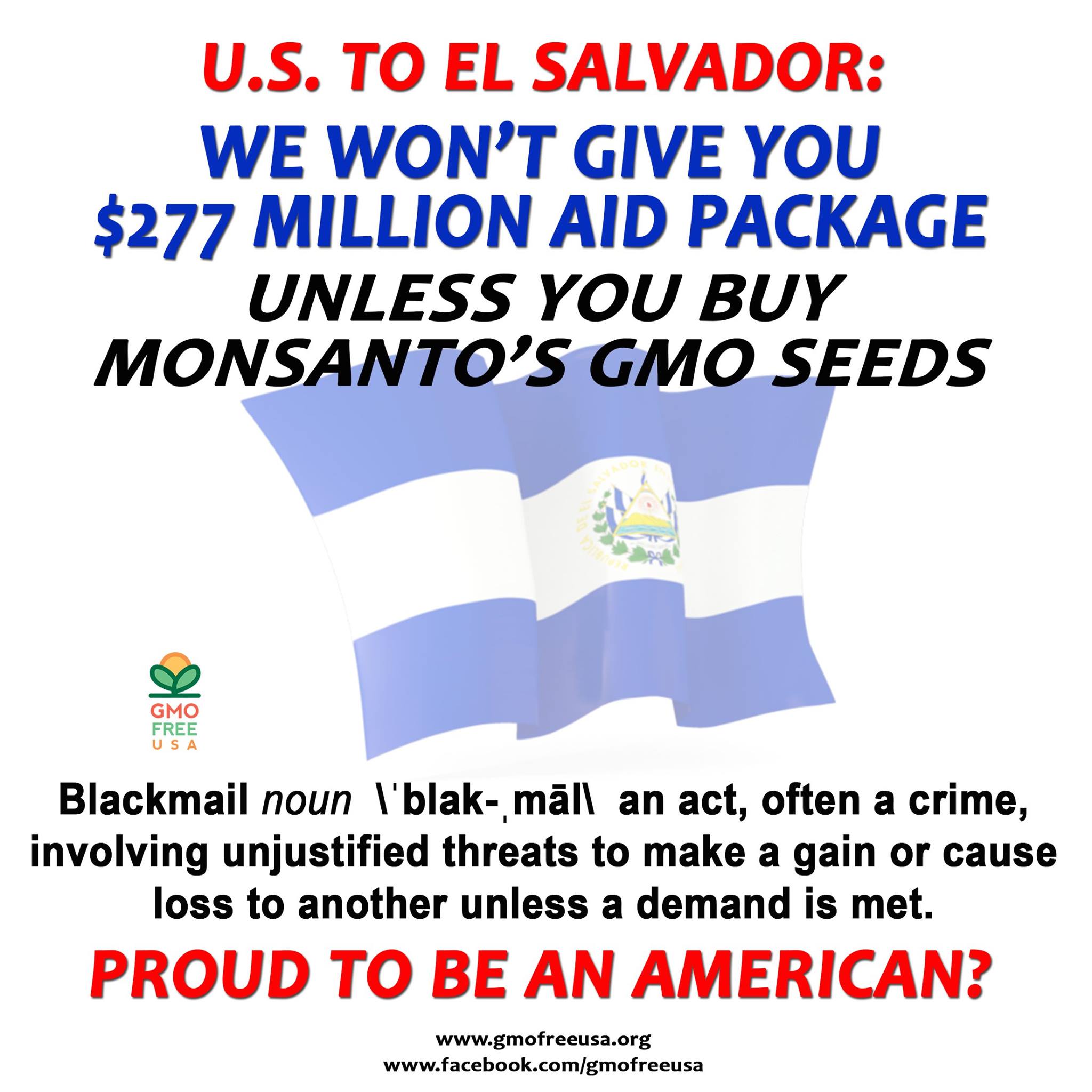 The U.S. Government Has Tied El Salvador $277 million Aid Package to Monsanto’s GMO Seeds. In recent weeks, the U.S. has been pushing the El Salvadoran Government to sign the second Millennium Challenge Compact. One of the main conditions on the agreement is allegedly for the purchasing of GM seeds from Monsanto. At the end of 2013 it was announced that without ‘specific’ economic and environmental policy reforms, the U.S. government would not provide El Salvador with $277 million in aid money through the Millennium Challenge Corporation (MCC). It is now clear that by ‘specific reforms’ the MCC means reforms that allow GM crops and their associated pesticides to be forced on El Salvador’s Government and citizens. Is it a coincidence that the MCC delayed its initial agreed aid payments following the announcement by the El Salvador Government that they were banning the use of Glyphosate (Roundup) and 52 other dangerous chemicals in September 2013? Is it a coincidence that the glyphosate ban was overturned?

Contact the USTR at "stakeholder inquiries" at iape@ustr.eop.gov and call the America´s office at 202-395-6135 to voice your outrage.

I'll admit that I'm skeptical. The best I can find is one Salvadoran official claiming that he's being pressured by U.S. officials, several news articles talking about the "alleged" requirement, and one article stating that the bone of contention is over current Salvadoran laws giving priority to local seeds to the exemption of imported seed.

They're quoting the bit about Roundup being linked to kidney disease, which we've apparently discussed in Does Roundup (glyphosate) cause kidney disease in farmers?.

These articles have a substantial amount of false information about the situation. A press release was issued by the US Embassy in El Salvador: http://sansalvador.usembassy.gov/news/2014/06/19.html

Not the answer you're looking for? Browse other questions tagged politics environmental-health monsanto .

11
Does Roundup (glyphosate) cause kidney disease in farmers?

48
Does decriminalizing drug use lead to less drug use?
7
Can the over-use of energy drinks cause a heart attack?
2
Do international laws require the detention and extradition of suspects?
21
Does Roundup harm mammals?
5
Does forcing a young child to smoke a cigarette discourage longer term use?
11
Does Roundup (glyphosate) cause kidney disease in farmers?
24
Have farmers been sued because Monsanto seeds are blowing into their fields?
14
Was Monsanto the primary manufacturer of Agent Orange?
3
Does sensitatization require less allergens than elicitation?