Is Matt Ridley's assertion that the most extreme of the IPCC climate projections is based on very implausible assumptions correct?

Matt Ridley, the science writer who is often grouped with global warming skeptics and denialists despite asserting:

man-made climate change is real but not likely to do much harm, let alone prove to be the greatest crisis facing humankind this century.

recently wrote an article in the Financial Post (also reproduced with extra references on his blog) that argued that the most extreme of the IPCC future climate models was based on implausible assumptions.

He asserts (my italics):

The IPCC commissioned four different models of what might happen to the world economy, society and technology in the 21st century and what each would mean for the climate, given a certain assumption about the atmosphere’s “sensitivity” to carbon dioxide. Three of the models show a moderate, slow and mild warming, the hottest of which leaves the planet just 2 degrees Centigrade warmer than today in 2081-2100. The coolest comes out just 0.8 degrees warmer.

Now two degrees [above pre-indistrial levels] is the threshold at which warming starts to turn dangerous, according to the scientific consensus. That is to say, in three of the four scenarios considered by the IPCC, by the time my children’s children are elderly, the earth will still not have experienced any harmful warming, let alone catastrophe.

He then proceeds to challenge the plausibility of RPC8.5, concluding:

the one thing we can say about RCP8.5 is that it is very, very implausible.

Is this assertion a correct characterisation of the RPC8.5 model's assumptions?

Supplementary question: is he correctly characterising the nature of the other future economy/climate models used by the IPCC?

See http://www.skepticalscience.com/rcp.php?t=3 for a summary of the assumptions behind each of the projections:

RCP 8.5 was developed using the MESSAGE model and the IIASA Integrated Assessment Framework by the International Institute for Applied Systems Analysis (IIASA), Austria. This RCP is characterized by increasing greenhouse gas emissions over time, representative of scenarios in the literature that lead to high greenhouse gas concentration levels (Riahi et al. 2007).

RCP6 was developed by the AIM modeling team at the National Institute for Environmental Studies (NIES) in Japan. It is a stabilization scenario in which total radiative forcing is stabilized shortly after 2100, without overshoot, by the application of a range of technologies and strategies for reducing greenhouse gas emissions (Fujino et al. 2006; Hijioka et al. 2008).

RCP 4.5 was developed by the GCAM modeling team at the Pacific Northwest National Laboratory’s Joint Global Change Research Institute (JGCRI) in the United States. It is a stabilization scenario in which total radiative forcing is stabilized shortly after 2100, without overshooting the long-run radiative forcing target level (Clarke et al. 2007; Smith and Wigley 2006; Wise et al. 2009).

RCP2.6 was developed by the IMAGE modeling team of the PBL Netherlands Environmental Assessment Agency. The emission pathway is representative of scenarios in the literature that lead to very low greenhouse gas concentration levels. It is a “peak-and-decline” scenario; its radiative forcing level first reaches a value of around 3.1 W/m2 by mid-century, and returns to 2.6 W/m2 by 2100. In order to reach such radiative forcing levels, greenhouse gas emissions (and indirectly emissions of air pollutants) are reduced substantially, over time (Van Vuuren et al. 2007a). (Characteristics quoted from van Vuuren et.al. 2011)

Matt Ridley's assertion that only one of the four scenarios predicts a temperature change of greater than two degrees (above pre-industrial levels) is false.

Table 12.3 of the IPCC makes this explicit. The probability that there will be temperature changes (with reference to the time period 1850-1900) greater than 2°C by the time period 2081-2100 under each of the four models is:

The IPCC report summarizes this as follows:

Based on this assessment, global mean temperatures averaged in the period 2081–2100 are projected to likely exceed 1.5°C above 1850-1900 for RCP4.5, RCP6.0 and RCP8.5 (high confidence). They are also likely to exceed 2°C above 1850-1900 for RCP6.0 and RCP8.5 (high confidence) and more likely than not to exceed 2°C for RCP4.5 (medium confidence). Temperature change above 2°C under RCP2.6 is unlikely but is assessed only with medium confidence as some CMIP5 ensemble members do produce a global mean temperature change above 2°C.

I find his comparison to be sloppy science. He mentions how much the models will result in temperatures being "warmer than today". Then, he switches baselines in the next sentence when he says "Now two degrees [above pre-indistrial levels] is the threshold at which warming starts to turn dangerous, according to the scientific consensus."

He is definitely aware of this baseline discrepancy, because he added the words "[above pre-indistrial levels]" (sic) to the quote when he reproduced it on his blog.

In addition to Articuno's answer (+1):

Lets look at the first reason Ridley gives for RCP8.5 not being realistic:

"For a start, this is a world of “continuously increasing global population” so that there are 12 billion on the planet. This is more than a billion more than the United Nations expects, and flies in the face of the fact that the world population growth rate has been falling for 50 years and is on course to reach zero – i.e., stable population – in around 2070. More people mean more emissions."

Right, well lets see what the UN report actually says, here is figure 7, which shows projected world populations out as far as 2300. The range of plausible world population in 2100 is 5.5 to 14 billion. So the figure of 12 billion that appears in RCP8.5 clearly would not be considered implausible by the UN. 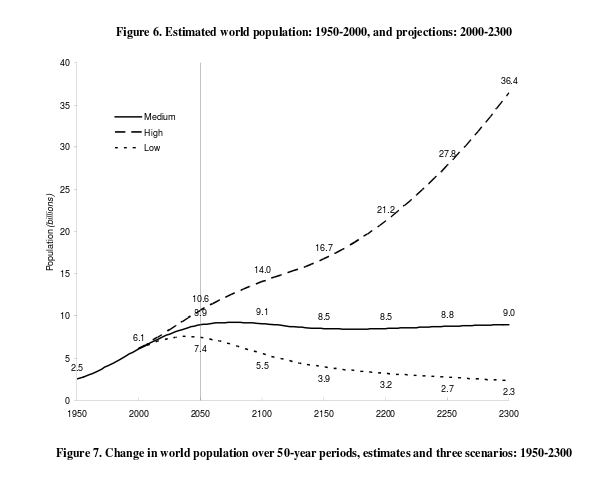 It took me all of five minutes of fact checking to find this out. It seems to me that Ridley is focusing on the medium scenario, in which global populations are projected to stabilize this century. However if you are going to say that something is implausible, you need to show that it is unlikely, for which you need the high and low scenarios as well. This is basically either poor scholarship or cherry picking on Ridley's part.

I suspect that many of Ridleys' other claims probably don't withstand cursory fact checking either, but frankly I have better things to do, when the bias in the article is already so obvious, e.g.

... To worry now in 2014 about a very small, highly implausible set of circumstances in 2100 that just might, if climate sensitivity is much higher than the evidence suggests, produce a marginal damage to the world economy, makes no sense.

These three assertions are only supportable by extreme cherry picking of the literature, and ignore all contradictory evidence, and ought to have rung alarm bells from anybody that has taken the time to look into the arguments on both sides of the "debate".

There is one important assumption in RCP8.5 that makes it unrealistic.

Coal use in particular increases almost 10 fold by 2100

So RCP 8.5 is not genuinely a business as usual scenario, but instead assumes that coal consumption growth greatly exceeds population growth.

In contrast to the above 2011 publication of the RCP8.5, so far world coal consumption has been:

Not the answer you're looking for? Browse other questions tagged climate-change forecasting .

13
Are fossil fuels making the world greener?
10
Is the cost of preventing climate change 50 times higher than the cost of adapting to it?
9
Did the IPCC obfuscate the evidence in a way that obscures the discrepancy between previous climate models and recent observations?
8
Is half of the climate change in the past 110 years due to natural variation in the Sun's output?