Have giant human skeletons been found?

This article shows a diagram of the remains of human giants 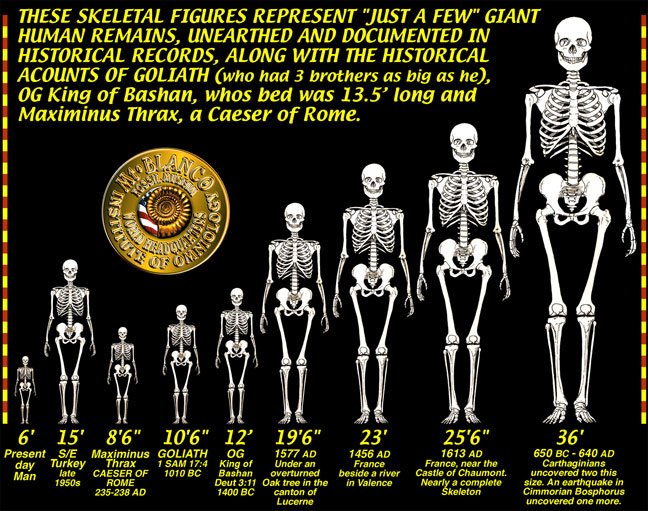 . The tallest one being 36 ft. (1097.28 cm.) This seems like a pretty large claim for an article that doesn't state any sources. Could there be any legitimacy to these claims?

No. There is no fossil evidence of any apes being larger than about 9.8ft tall.

"The fossil record suggests that individuals of the species Gigantopithecus blacki were the largest known apes that ever lived, standing up to 3 m (9.8 ft)." (Refs: Wikipedia, McMaster University).

Adding to Articuno's answer, the reason no remains of the type have been found is because adult hominids taller than (about) 9 feet simply can't exist.

It's about physics: If you double the height of any being, its surface area quadruples, and its volume triples. While lengths scale linearly (x), areas scale quadratically (x^2) and volumes scale cubically (x^3). This means that a human as big as those in your examples would not reach adulthood.

The oldest remains of a person with gigantism are those of a man that lived close to Rome in third-century A.D. Gigantism itself is extremely rare (about three people in a million worldwide today).

'Giants' can't exist because it's a scaling issue. Galileo was one of the first to point it out:

Galileo begins “Two New Sciences” with the striking observation that if two ships, one large and one small, have identical proportions and are constructed of the same materials, so that one is purely a scaled up version of the other in every respect, nevertheless the larger one will require proportionately more scaffolding and support on launching to prevent its breaking apart under its own weight.

If you double all the dimensions of a stone building supported on stone pillars, the weights are all increased eightfold, but the supporting capacities only go up fourfold. This all applies to animals and humans too:

(Large) increase in height can be accomplished only by employing a material which is harder and stronger than usual, or by enlarging the size of the bones, thus changing their shape until the form and appearance of the animals suggests a monstrosity.

If humans were to be doubled in size, for example, their shape would need to change so much they would hardly be considered the same species.

2
Did Giant Humans exist?
25
Was there a giant red-haired race in North America?

23
Was Sir Arthur Conan Doyle responsible for the Piltdown Man hoax?
33
Were pyramids of glass found under the Bermuda Triangle?
18
Were technologically advanced artifacts found at the Durupinar "ark" site?
3
Has a holographic library been found in tunnels under the Bucegi mountains?
39
Are there textual deviations between the Dead Sea Scrolls and the Old Testament?
4
Did archeologists find radioactive skeletons in Mohanjo-daro?
10
Are results of carbon dating cross referenced by other methods?
33
Is this "ancient Hebrew leather manuscript" seized by police in Turkey authentic?