In the USA, is AIDS most prevalent in the gay male population?

Back in the early 1980s, AIDS was originally named Gay-related Immune Deficiency (GRID). Researchers renamed the disease as they became aware of the spread of the disease in other demographics. For the non-USA population that may not be aware of this long held belief, a gay organization in 2006 flip-flopped on their position.

The Los Angeles Gay and Lesbian Center has abandoned a long-held homosexual activist contention by declaring on billboards posted throughout Southern California that HIV/AIDS is a “gay disease.”

Is AIDS primarily a homosexual-male disease in the USA today? if not,

Is AIDS disproportionately represented in the homosexal-male community in the USA today?

Gay, bisexual, and other men who have sex with men (MSM) of all races and ethnicities remain the population most profoundly affected by HIV.

In 2010, white MSM continued to account for the largest number of new HIV infections (11,200), by transmission category, followed closely by black MSM (10,600).

Estimated New HIV Infections in the United States, 2010, for the Most Affected Subpopulations: 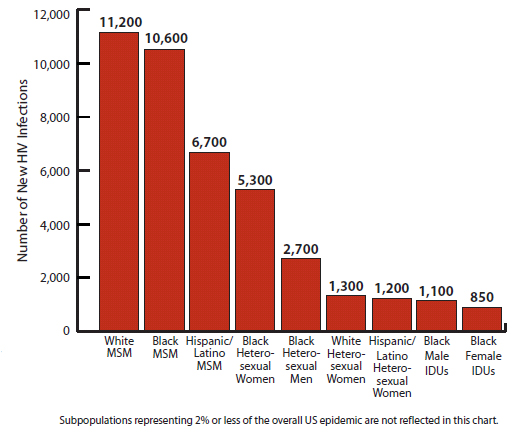 Source: aids.gov. HIV IN THE UNITED STATES: AT A GLANCE

41
Is 10% of the world's population homosexual?
30
Has condom distribution increased the spread of HIV/AIDS in Africa?
26
Is HIV the cause of AIDS?
13
Did an experimental Oral Polio Vaccine (OPV) cause the AIDS pandemic?
3
Does UAE screen people with HIV/AIDS at the airport?
9
Do 62% of gay men diagnosed with AIDS practice unsafe sex?
7
What are the chances of female-to-male HIV transmission during straight sex?
37
Did more gay men die in NYC during the AIDS crisis than US soldiers in Vietnam?