Were firearms prohibited in Dodge City, Kansas in the 1870s?

This image has made the rounds in various discussions of gun control in the USA. 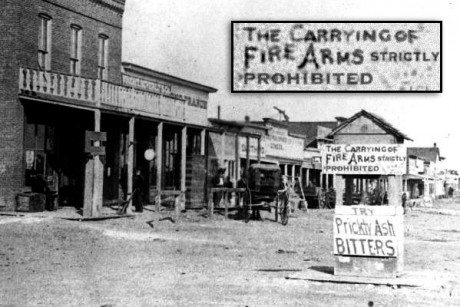 The picture was purportedly taken in Dodge City, Kansas (Popular culture's quintessential Wild West town, populated by figures such as Wyatt Earp and the setting of fiction such as Gunsmoke), in 1878. Is this image genuine and firearms were prohibited in Dodge City?

Yes, the photograph is real and comes from Adam Wrinkler's book "Gunfight: The Battle over the Right to Bear Arms in America" which he mentioned in an article on Huffington Post on the topic of gun control in the Wild West:

Guns were obviously widespread on the frontier. Out in the untamed wilderness, you needed a gun to be safe from bandits, natives, and wildlife. In the cities and towns of the West, however, the law often prohibited people from toting their guns around. A visitor arriving in Wichita, Kansas in 1873, the heart of the Wild West era, would have seen signs declaring, "Leave Your Revolvers At Police Headquarters, and Get a Check."

A check? That's right. When you entered a frontier town, you were legally required to leave your guns at the stables on the outskirts of town or drop them off with the sheriff, who would give you a token in exchange. You checked your guns then like you'd check your overcoat today at a Boston restaurant in winter. Visitors were welcome, but their guns were not.

In my new book, Gunfight: The Battle over the Right to Bear Arms in America, there's a photograph taken in Dodge City in 1879. Everything looks exactly as you'd imagine: wide, dusty road; clapboard and brick buildings; horse ties in front of the saloon. Yet right in the middle of the street is something you'd never expect. There's a huge wooden billboard announcing, "The Carrying of Firearms Strictly Prohibited."

While people were allowed to have guns at home for self-protection, frontier towns usually barred anyone but law enforcement from carrying guns in public.

When Dodge City residents organized their municipal government, do you know what the very first law they passed was? A gun control law. They declared that "any person or persons found carrying concealed weapons in the city of Dodge or violating the laws of the State shall be dealt with according to law." Many frontier towns, including Tombstone, Arizona--the site of the infamous "Shootout at the OK Corral"--also barred the carrying of guns openly.

Other cities had similarly restrictive gun laws and fines were issued for breaching them,

And one fact is usually ignored: Back then, Tombstone had far stricter gun control than it does today. In fact, the American West's most infamous gun battle erupted when the marshal tried to enforce a local ordinance that barred carrying firearms in public. A judge had fined one of the victims $25 earlier that day for packing a pistol.

"You could wear your gun into town, but you had to check it at the sheriff's office or the Grand Hotel, and you couldn't pick it up again until you were leaving town," said Bob Boze Bell, executive editor of True West Magazine, which celebrates the Old West. "It was an effort to control the violence."

The fact that firearms had to be checked explains why contemporary accounts would make reference to secreting their firearms at times,

There were no dissenters to the program. I saw at a glance that my Bunkie was heart and soul in the play, and took my cue and kept my mouth shut. We circled round the town to a vacant lot within a block of the rear of the dance hall. Honeyman was left to hold the horses; then, taking off our belts and hanging them on the pommels of our saddles, we secreted our six-shooters inside the waistbands of our trousers. The hall was still crowded with the revelers when we entered, a few at a time, Forrest and Priest being the last to arrive. Forrest had changed hats with The Rebel, who always wore a black one, and as the bouncer circulated around, Quince stopped squarely in front of him. There was no waste of words, but a gun-barrel flashed in the lamplight, and the bouncer, struck with the six-shooter, fell like a beef. Before the bewildered spectators could raise a hand, five six-shooters were turned into the ceiling. The lights went out at the first fire, and amidst the rush of men and the screaming of women, we reached the outside, and within a minute were in our saddles. All would have gone well had we returned by the same route and avoided the town; but after crossing the railroad track, anger and pride having not been properly satisfied, we must ride through the town.

As an aside, the gun check laws are the reason why we have such artifacts as Wyatt Earp's gun: 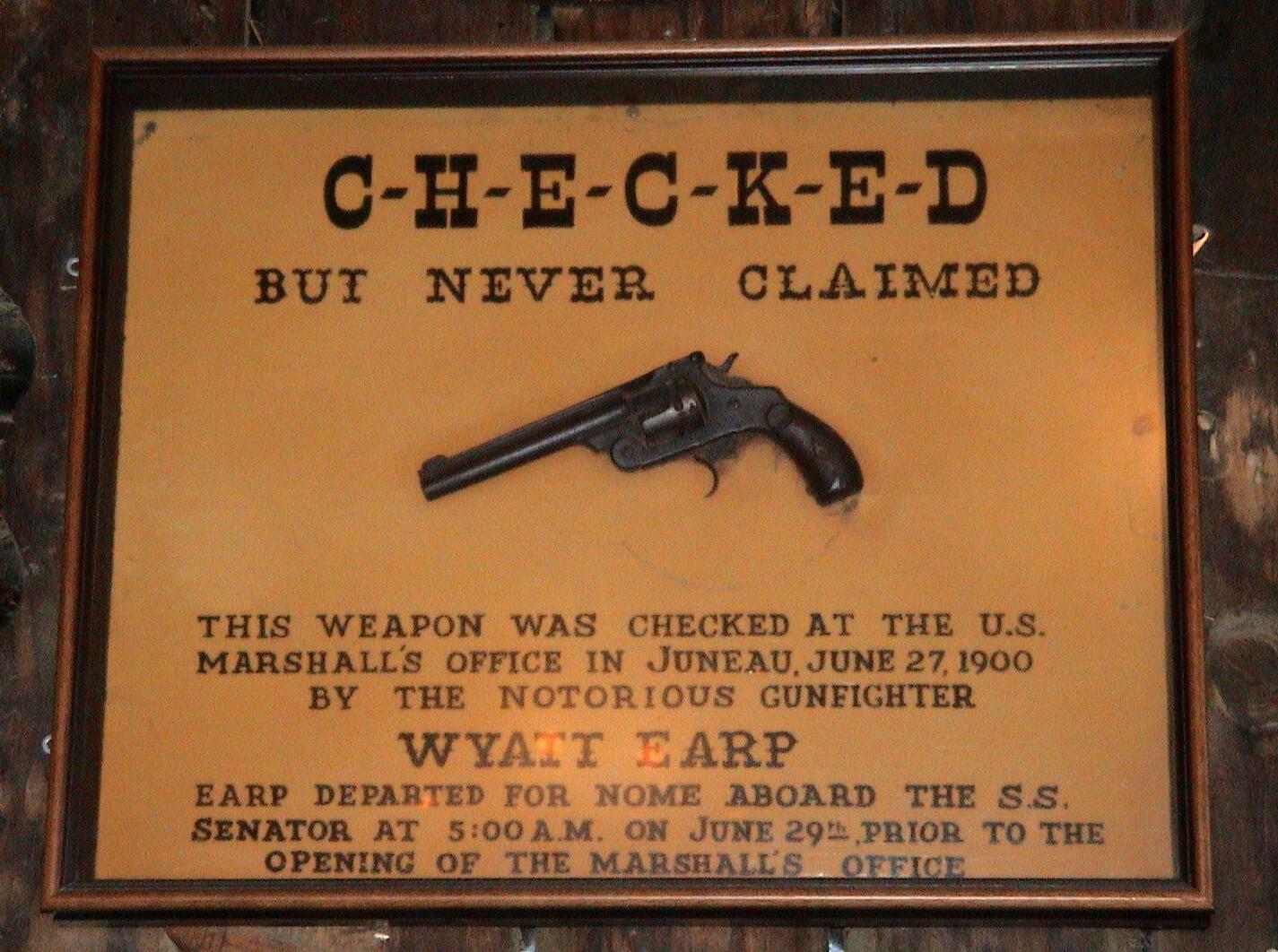 Winkler is not telling the whole story. https://crpa.org/news/crpa/did-the-wild-west-really-have-more-gun-control-than-we-do/

Not the answer you're looking for? Browse other questions tagged history united-states guns photography .

6
Is it possible to dodge the fire of matchlock muskets?
11
Do the 3 red stars on Washington DC's flag represent 3 city states?
10
Did the Aurora, Colorado movie theater killer select the only nearby theater where guns were prohibited?
7
Deaths due to firearms in the US since Civil War
6
Were 53 terrorist attacks thwarted in New York City since September 11, 2001 and June 2015?
19
Were lawn jockey statues used to indicate stops on the Underground Railroad?
30
Are fully automatic firearms very hard for civilians to obtain in the USA?
15
Were enough guns to arm the Marine Corps sold during Black Friday 2017?
24
Must churchgoers be registered with the government in Kansas City?