Where can I find evidence for the prescientific-medicine-claims issued by James Randi?

There is a well known presentation given by James Randi about homeopathy. At one point in his talk, James Randi issues the claim that up into the victorian era, if you consulted a doctor you reduced your chances of survival because many of the standard medications of the day where highly toxic. He goes on to say that statistics of the day seem to support that claim.

What statistics of the day is he talking about? It's a great story to illustrate how homeopathy had its claim to fame, but I feel very uncomfortable quoting statistics that I'm unfamiliar with.

The book Trick or Treatment by Edzard Ernst and Simon Singh also claims this:

Prior to the development of evidence-based medicine, doctors were spectacularly ineffective. Those patients who recovered from disease were usually successful despite the treatments they had received, not because of them. [p. 37, emphasis mine]

Furthermore, they relay statistics that have been compiled by Florence Nightingale about the mortality in hospitals during the Crimean War. In one particular hospital in Scutari she managed to lower the mortality rate from 43% to 2% in just five months by increasing hygiene.

Also note the following diagram where only red areas are deaths from wounds – all other colours indicate deaths from infectious diseases, contracted in the hospital. 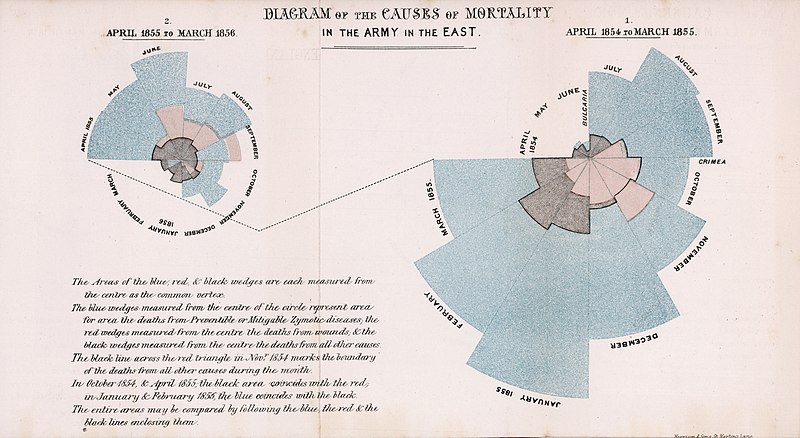 [Notes on Matters Affecting the Health, Efficiency, and Hospital Administration of the British Army by Florence Nightingale, 1858]

There are a lot of different proofs of that statements, but the one angle that had the most impact on me was first hearing about Ignaz Semmelweis, who first publicised the benefits of hand disinfection by the doctors - and was roundly shunned and criticized for his outlandish views.

To quote from Wiki (for the quality of the writing):

Ignaz Philipp Semmelweis was a Hungarian physician described as the "savior of mothers", who discovered by 1847 that the incidence of puerperal fever could be drastically cut by the use of hand disinfection (by means of hand washing with chlorinated lime solution) in obstetrical clinics. Puerperal fever (or childbed fever) was common in mid-19th-century hospitals and often fatal, with mortality at 10%–35%. Semmelweis postulated the theory of washing with "chlorinated lime solutions" in 1847 while working in Vienna General Hospital's First Obstetrical Clinic, where doctors' wards had three times the mortality of midwives' wards. He published a book of his findings in childbed fever in Etiology, Concept and Prophylaxis of Childbed Fever.

Despite various publications of results where hand-washing reduced mortality to below 1%, Semmelweis's practice earned widespread acceptance only years after his death, when Louis Pasteur confirmed the germ theory. In 1865, a nervous breakdown (or possibly Alzheimer's) landed him in an asylum, where Semmelweis ironically died of septicemia, at age 47.

As far as cites, Semmelweis's book can of course serve as a cite itself since it showed results of studies; the book should be available from Google Books.

Not the answer you're looking for? Browse other questions tagged homeopathy jref .

8
Is Tonsilotren homeopathic medicine effective for the treatment of pharyngitis?