Are white people more likely to commit mass murder in the United States?

There have been several claims in the media that white men are more likely to commit mass murders. I've seen rather strong evidence that the vast majority of these crimes are committed by men, so I don't doubt this part of the claim. On the other hand, I haven't seen any non-dubious statistics for the racial aspect of the claim. Are white people more likely to commit mass murder than those of other races?

This only shows that given a mass murderer, they are more likely to be white.

71.4% of mass murderers being white is not an over-representation of whites.

No. An answer on Politics.SE quotes from Wikipedia:

according to a database compiled by Mother Jones, the race of the shooters is proportionate to the overall US population, although Asians are overrepresented and Latinos underrepresented.

This includes way more mass shootings than the other answer.

This is based on data from Mother Jones as reported at CNN:

"If you look at the whole list, it turns out that whites and blacks are pretty proportionate to their population, very close," said Dave Cullen, author of the book "Columbine," which tells the story of the 1999 massacre at Columbine High School in Littleton, Colorado. Harris and Klebold, the shooters there, were white.

Historically, Latinos and Asians have been the exception.

The Virginia Tech massacre was carried out by Seung-Hui Cho, who was born in South Korea.

"Latinos are almost nowhere to be seen," Cullen told CNN's "New Day." "Asians continue to be heavily overrepresented -- more than 2½ times their size in the population."

Here is a per-capita chart: 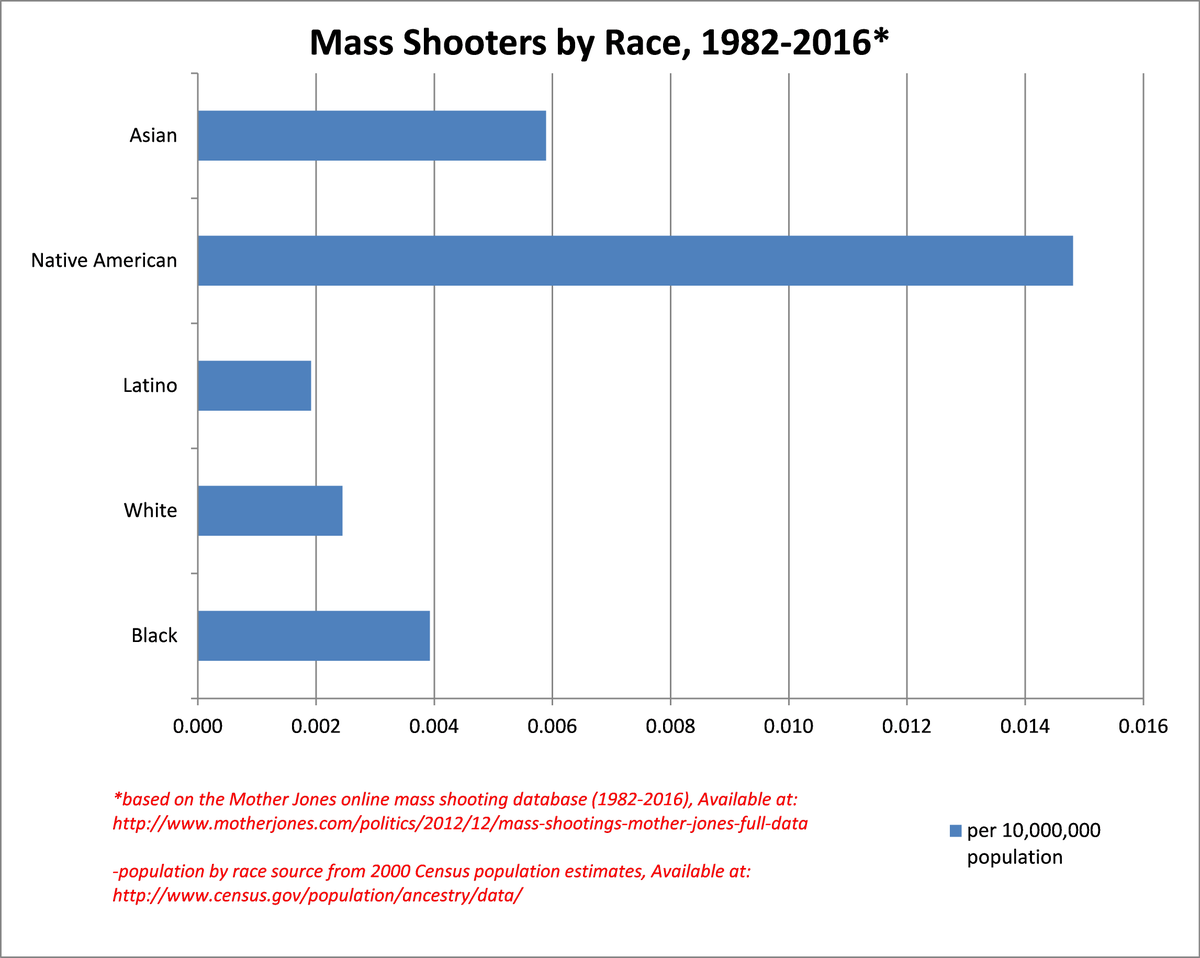 I've come to discover that the Mother Jones compilation may be biased, as it left off Plano, TX, 8 killed. It also has shootings with only 3 fatalities, while mass shootings are generally defined as 4 fatalities (not including shooter). Why didn't they include the Ohio baby party 'mass shooting' with many injured but only 1 fatality?

Not the answer you're looking for? Browse other questions tagged united-states criminology race .

2
Are mass murderers in the US mostly white?
1
"White people" crime?
19
Do Republican legislatures tend to relax gun laws after mass shootings?
16
Are Muslims 25 times more likely to commit terrorist attacks within the United States than non-Muslims?

20
If comparing white populations, does the U.S. have the same murder rate as Belgium?
17
Is the immigrant/crime correlation simply explained by lower wealth?
38
Is there a correlation between voting for the Democratic Party and gun crimes in the USA?
12
In USA the foreign-born are only a fifth as likely to be incarcerated as the native-born?
6
Do illegal immigrants commit more murders than mass shooters?
14
Were the vast majority of people on the National Sex Offender Registry children when they committed their crime?