Does Roundup (glyphosate) cause kidney disease in farmers?

A viral photo on Facebook widely, shared by GMO Free USA, claims that Roundup has been linked to kidney disease. 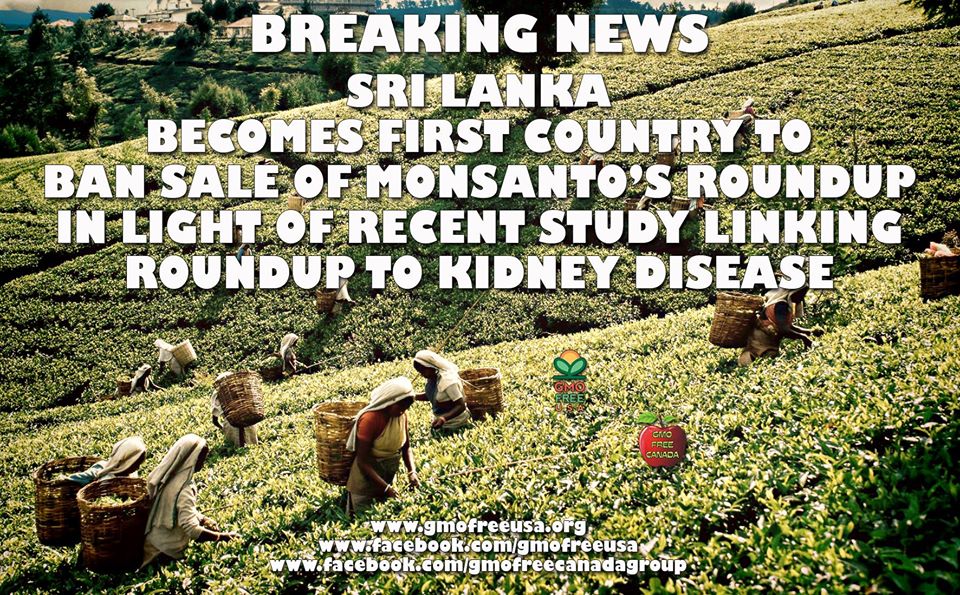 I am not interested if or why Sri Lanka banned Roundup, or whether they are the first. I am interested if there is good evidence that it has been linked to kidney disease.

Admirably, the associated Facebook page links to the study:

(I have not read the study. I haven't attempted to judge its reliability.)

Environmental news-source, Grist, has reported that NPR has also reported on the story.

Is this a reliable link between glyphosate use and chronic kidney disease of unknown etiology, warranting caution?

There is a News and Views article "Mesoamerica's Mystery Killer " in Science about this disease. It is not a peer-reviewed scientific paper, but a news article. The main hypothesis according to the article is that heat and dehydration in combination with other factors are responsible. But it does mention the pesticide hypothesis and the researchers asked about it were rather skeptical:

He points to research from Sri Lanka suggesting that glyphosate in pesticides chelates arsenic, boosting its level in the water and its potential to damage the kidneys' delicate filtering machinery. And his team has preliminary evidence that arsenic levels are higher in fields surrounding the cemetery than in the nearby village.

Wesseling, who has built her career around studying the impact of toxic substances, says his arguments have no merit. She says neither pesticides nor arsenic can explain the geography of the disease. Arsenic, she says, is prevalent in soil and lakes across El Salvador, not just where CKDu is common. "It doesn't convince me at all," she says. "He's only looked at one specific place."

Cruz of Hospital Nacional Rosales agrees. "We need other hypotheses," she says.

The general idea presented in that paper is that glyphosate is able to chelate metals, which is well-known and not controversial. The distribution of the disease is correlated with water hardness according to the paper, so they speculate that a metal-glyphosate complex is responsible for the disease. They speculate further that the metal-glyphosate complexes are not metabolized in the liver and then released in the kidney.

The article behind this theory is explicitly marked as "hypothesis" in the journal, and it does not actually contain any data. The only actual new data related to the hypothesis it mentions is a study currently conducted in California. This data is pretty much impossible to interpret now as it is only roughly described in the article and does not mention any control group or any further detail.

There isn't really anything to debunk here as there is no evidence in the first place. The entire article is speculative.

The link between glyphosate and chronic kidney disease of unknown etiology (CKDu) appears to be a medical hypothesis. The underlying process is a tubulointerstitial nephritis, and as well as other groups, appears in otherwise young men. A review of this disease published in April 2014 and concluded: [1]

Associations were reported with agricultural work, agrochemical exposure, dehydration, hypertension, homemade alcohol use and family history of chronic kidney disease. There is no strong evidence for a single cause, and multiple environmental, occupational and social factors are probably involved. Further etiological research is needed, plus interventions to reduce preventable risk factors.

9
Does sun screen cause cancer?
4
Does "hard water" cause eczema?
21
Does Roundup harm mammals?
4
Does the Millennium Challenge Compact require El Salvador to use Monsanto seeds?
9
Do US farmers apply Roundup to non-GMO wheat crops 7-10 days before harvest?
8
Do glyphosate-based herbicides cause autism?
7
Does glyphosate herbicide break down into more toxic substances in the environment?
8
Does residential radon cause lung cancer?
19
Is Roundup weed killer carcinogenic?