Were thousands of people executed by "Breaking On the Wheel" for copying fabrics in pre-revolution France?

An article by Rick Falkvinge best categorized as political opinion / commentary on copyright enforcement claims that:

A few centuries ago, the penalty for unauthorized copying was breaking on the wheel. It is a term we’re not very familiar with these days, but it was a form of prolonged torturous death penalty where the convict first had every bone in his body broken, and then was weaved into the spokes of a wagon wheel and set up on public display.

The [French] King responded by introducing penalties for pirating these fabrics. Light punishments at first, then gradually tougher. Towards the end, the penalty was death by public torture, drawn out over several days. And it wasn’t just a few poor sods who were made into public examples: sixteen thousand people, almost entirely common folk, died by execution or in the violent clashes that surrounded the monopoly. In practice, everybody knew somebody who had been horribly executed for pirating. 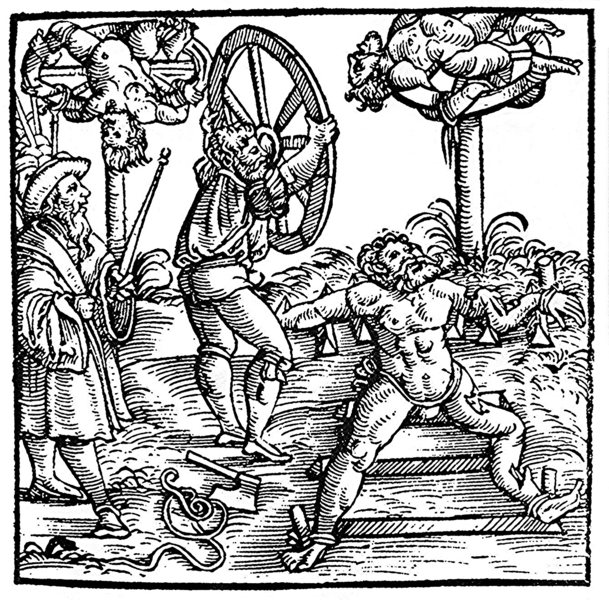 Were such numbers of people executed by "Breaking On the Wheel" for copying fabrics in pre-revolution France?

You're right to ask for sources. One of the primary sources is a book in Swedish on the era of mercantilism on the Continent (meaning Europe).

The original article in Swedish is here and there are lots of sources in the comments.

Notably, there's this quote from Merkantilismen by Eli Heckscher, fifth chapter, regulation of trade in France:

“Of course, the attempt to stop a development supported by a violent fashion trend, carried by the... influential female kin, could impossibly succeed. The policy is considered to have cost 16,000 people their lives, through executions and armed clashes, plus the yet uncounted who were sentenced to slavery on galleys and other punishments; in Valence, on one single occasion, 77 people were sentenced to hang, 58 to be broken on the wheel and 631 to the galleys, one was acquitted, and none were pardoned. But this was so far from effective, that the use of printed kattuner (English?) spread through all social groups during this period, in France and elsewhere.”

The book is apparently "highly respected in the academic world", but I find the information it gives rather suspect. It clearly refers to Chintz fabrics - which were in fact made illegal to import into France in 1686 in order to protect the French clothing industry which could not produce them. It was finally lifted in 1759.

The number of executions (total 16,000 and the "single occasion") was probably lifted from The Worldly Philosophers by Robert L. Heilbronner, where the quote occurs (unsourced) almost verbatim on page 31 (thank you, Google Books!). It was written in 1953, the same year as the Swedish book Falkvinge quotes, and was very popular.

I could not find other sources for mass executions related to the Chintz ban, and in any case it was a case of industry protectionism, not copyright.

Not the answer you're looking for? Browse other questions tagged copyright criminology .

12
Does USA imprison people of color at a higher rate than whites for the same crime convictions?
14
Were the vast majority of people on the National Sex Offender Registry children when they committed their crime?