Has the Holocaust been exaggerated?

I am not a Holocaust denier but I am skeptical of some of the reported numbers and details of the historical event. Is there any evidence that 6 million Jews were executed as part of a plan to eliminate the Jewish people? I am also skeptical of some of the accounts of Jewish skin used for lampshades and shrunken heads of concentration camp inmates.

The Nazis documented their extermination campaign. So they left detailed documentary records that provide good evidence that six million were killed.

For example, approximately a million Jews on the Eastern Front were shot during 1941-42, and buried in large pits. This is known partly because the Einsatzgruppen, the mobile killing units that coordinated these massacres, prepared detailed reports on the murders - reports that contained precise death tolls, broken down into men, women and children.

These reports were sent to high ranking officials in Berlin, and to army, police and SS officers, as well as diplomats and even prominent industrialists. This wide distribution suggests that the perpetrators felt no shame at what they did. Had these killings not been part of Berlin's policy, the reports would never have been so widely distributed.

From Denying the holocaust, BBC 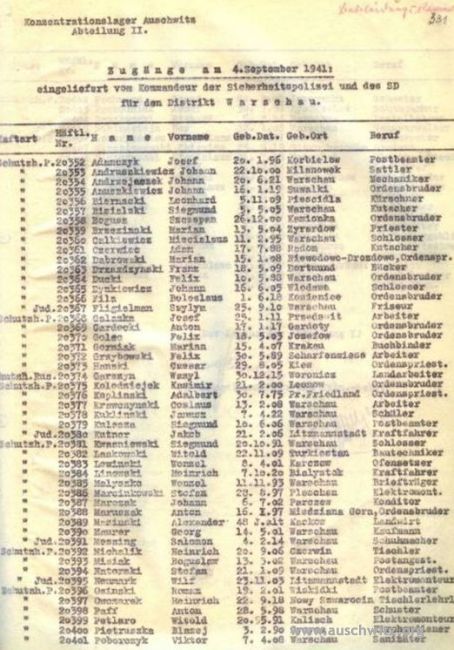 In the Museum Archives there are 252 lists of newcomers from different periods. Each list contains: date, date of registration, camp number, prisoner category, names and surnames, date and place of birth and occulation. (Auschwitz-Birkenau State Museum Archives)

Letter from SS-Sturmbannführer Jahrling to SS-General Kammler estimating the number of corpses that can be disposed off in 24 hours in the Auschwitz crematoriums, June 25 1943.

Of course, the above is just a few small examples from a huge mountain of evidence.

According to the US holocaust memorial museum

Allied prosecutors submitted some 3,000 tons of records at the Nuremberg trial.

And of course, there is a lot of evidence other than that submitted at Nuremberg. Some of this additional evidence can be found at numerous museums and libraries around the world.

The story about the lampshade was presented as being possibly true by the National Geographic society, who say that there is a lampshade that is definitely made of human material and for which evidence "points to" an origin in Nazi Germany. According to snopes there is a book on the topic (the wonders of Google!). However, this turns out not to be the case, see the comment by @Oddthinking below.

There appears no shortage of sources for evidence on the numbers killed, see also the excellent answer by @RedGrittyBrick above. I don't see any reason to be skeptical of any exaggeration, so I'd say "no, it hasn't been exaggerated". There also seems good documentary evidence that it was part of a deliberate plan.

However I have to say that making a lampshade out of human skin is not by any means the worst thing that happened in the concentration camps. It is a pretty damning indictment of what went on there if being skeptical of whether they made lampshades out of human remains is the level we have to reach before skepticism becomes reasonable.

Additionally to great answers provided @DikranMarsupial and @redgrittybrick I would strongly recommend Chronicles of Terror - a digital repository of the witness depositions made before Main Commission for the Investigation of German Crimes in Poland (predecessor of the Polish Institute of National Remembrance).

As of today it contains depositions 3927 testimonies (2530 with English translation), mostly collected shortly after the war. While alone don't provide any exact numbers, they document scale of Nazi atrocities.

Not the answer you're looking for? Browse other questions tagged history world-war-ii .

17
Has Go ever been used to decide a war?
21
Has Noah's ark been discovered in Turkey?
37
Are Elie Wiesel and Lazar Wiesel the same person?
5
Has it only been about two hundred years since women gained access to literacy?
24
Has the Quran (the recitation) been preserved since Muhammad?
25
Have 50 million Eastern Orthodox Christians been killed in the 20th century?
32
Has any programmer ever been paid per line of code?