Are these gigantic stones in Russia from a technologically advanced ancient civilization?

According to the Atlantean Gardens blog humans worked 3000 ton stones were found in Russia. 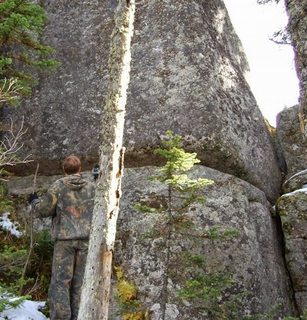 The Rundown Live has more photos.

Dr Valery Uvarov thinks they are man-made. He is "Head of the Department of Palaeoscience, Palaeotechnology, and UFO Research of the National Security Academy of Russia".

Is this site from an ancient advanced civilization?

This is very interesting. I am going to elaborate on Valery Uvarov first.

Let's have a look at Dr Valery Uvarov. It seems very hard to get a biography of the guy, the only information I can find is:

Dr Valery Mikhailovich Uvarov is the head of the Department of UFO Research, Palaeosciences and Palaeotechnology of the National Security Academy of Russia, and has devoted more than 14 years to ufology as well as to the study of the legacy of ancient civilizations.

He is the author of numerous papers on palaeotechnology and palaeoscience, as well as ufology and esoterica, published in the Russian and foreign press.

So if he really is a specialist in Palaeoscience, that would make him the right person to assess this kind of phenomenon. I did a search for papers authored by him in English, however the only documents that match him are his books on ufology. This means that he hasn't published any papers in a reputable, international journal on Geology or Palaeoscience which makes me rather sceptical about his authority in the field.

The National Security Academy of Russia where he apparently works, is only ever mentioned in connection with him. So that means either he is the only member of that academy that ever translates the name into English or it's a made-up institute.

That is all the information that I can find about him. But given that he does not seem to publish in scientific journals (or at least international ones), never gives information on his exact education background and works at a fictitious academy, I doubt he is what you would call a credible scientist.

Now on the matter itself, are those stones man-made?.

The story about those structures seems to be pretty new, so I couldn't find much reliable information on how they could have been formed.

What makes you say those structures are not natural formations? If you look at this video of the site, it looks a lot less like a man-made structure.

There are plenty of similar structures that a layman would identify as man-made but that are actually natural. Examples are the Giant's Causeway in Northern Ireland or structures called tors, that look like piled up blocks.

Valery Uvarov doesn't have a scientific track record and is not a credible scientist. As of now, nothing indicates that those structures are man-made.

10
Did ancient Indians invent guns, lasers, radars and nuclear weapons?
25
Are Ashkenazi Jews largely descended from Khazars?
8
Are these “necropants” trousers made from human skin?
12
Do these photos from the Civil Rights Era show Bernie Sanders?
6
Are these logos properly attributed to their original users?
73
Are the claims made by Indian Ministers / personalities regarding ancient Indian inventions true?
5
Are the various claims regarding Ancient Indian Science made in the AICTE/MHRD new book “Bharatiya Vidya Sar” for a Indian Elective Course true?
1
Are the following Twitter quotes from Vox leader true?