Is Easter named after the Canaanite goddess Ishtar?

According to the Richard Dawkins Foundation: 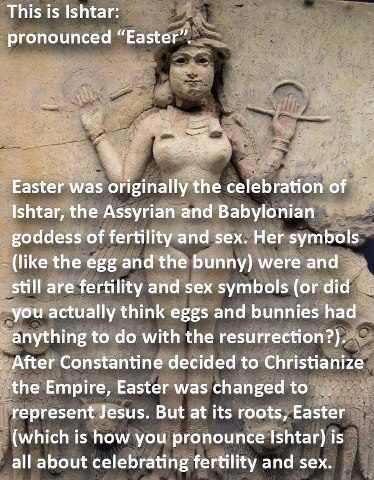 No, Easter is derived from Eōstre, who was a Germanic divinity, a goddess of the dawn. The word is related to other dawn goddesses, but not to Ishtar, who is goddess of fertility and war. This is backed up by The Compact Edition of the Oxford English Dictionary, 1971, Vol. 1, pg. 827:

See also this question on the English Language site.

Here is the entry from the Oxford English Dictionary, Third Edition June 2011:

Etymology: Cognate with Old Dutch ōster- (in ōstermānōth April, lit. ‘Easter-month’), Old Saxon ōstar- (in ōstarfrisking paschal lamb; Middle Low German ōsteren , ōstern , plural), Old High German ōstara (usually in plural ōstarūn ; Middle High German ōster (usually in plural ōstern ), German Ostern , singular and (now chiefly regional) plural), probably < the same Germanic base as east adv. (and hence ultimately cognate with Sanskrit uṣas , Avestan ušah- , ancient Greek (Ionic and Epic) ἠώς , (Attic) ἕως , classical Latin aurōra , all in sense ‘dawn’). For alternative (and less likely) etymologies see the references cited below. It is noteworthy that among the Germanic languages the word (as the name for Easter) is restricted to English and German; in other Germanic languages, as indeed in most European languages, the usual word for Easter is derived from the corresponding word for the Jewish Passover; compare pasch n.

Bede ( De Temporum Ratione 15. 9: see quot. below) derives the word < Eostre (a Northumbrian spelling; also Eastre in a variant reading), according to him, the name of a goddess whose festival was celebrated by the pagan Anglo-Saxons around the time of the vernal equinox (presumably in origin a goddess of the dawn, as the name is to be derived from the same Germanic base as east adv.: see above). This explanation is not confirmed by any other source, and the goddess has been suspected by some scholars to be an invention of Bede's. However, it seems unlikely that Bede would have invented a fictitious pagan festival in order to account for a Christian one. For further discussion and alternative derivations see D. H. Green Lang. & Hist. Early Germanic World (1998) 351–3, J. Udolph & K. Schäferdieck in J. Hoops's Reallexikon der germanischen Altertumskunde (ed. 2, 2003) XXII. 331–8, and for a parallel development compare yule n.

Here is a detailed answer to the second question from a blog by a King James Bible apologist.

One view is that Easter was in fact the name of the Anglo-Saxon pagan goddess of spring and that Herod was waiting till after this pagan holiday was over before he was going to have Peter killed. There are however many serious problems with this view. Number one is the fact that the pagan goddess was named Eoestre or Eastre or some say Ishtar or Astarte (all different gods and goddesses), but the name is not Easter.

Let's look at it from the Greek side of things. The Greek word used here is clearly πάσχα or paska. There is NO way on God's green earth that the Greek word πάσχα can possibly mean anything remotely like "Eoestre" or "Ishtar". The King James Bible translators were not morons. They knew exactly what this word means and it means EASTER, particularly when it applies to the yearly celebration of the Resurrection of our Lord Jesus Christ, and that is what they wrote. The second major problem with this view is that Herod was an Edomite and probably a Roman citizen, but by no stretch of the imagination was he an Anglo-Saxon.

The term Anglo-Saxon designates the population in Britain partly descended from the Germanic tribes who migrated from Europe and settled the south and east of the island beginning in the early 5th century, and the period after their initial settlement through their creation of the English nation up to the Norman conquest. The Anglo-Saxon era denotes the period of English history between about 550 and 1066. The term can be used for the language, also known as Old English, that was spoken and written by the Anglo-Saxons in England (and parts of south-eastern Scotland) between at least the mid-5th century and the mid-12th century, after which it is known as Middle English.

So it would be more than a little difficult to have a Roman/Edomite king in the first century celebrating an Anglo-Saxon pagan goddess who was never acknowledged among the Romans and in fact did not even exist until some 4 to 5 centuries later. About the only thing the term Easter and the Anglo-Saxon Eoestre could possibly have in common is that they are both derived from the Middle English word "east" meaning simply the East. Aside from that, it's a theory totally devoid of and contrary to all known historical facts.

16
Fasting for 40 days - is it possible?
22
Was there an organized early Jerusalem church?
8
Is Halal meat healthier to consume?
31
Is Idaho forcing pastors to conduct same-sex weddings or face penalties?
21
Was there a study finding that being an atheist is viewed on the level of being a rapist in the US?
10
Was Glyn Barrett invited to speak at a meeting for an atheist society in Cambridge?
7
Is the swastika over 11000 years old?
32
Does the Talmud say, "The Jews are called human beings, but the non-Jews are not humans. They are beasts."?