Did Gandhi trump Professor Peters in a number of interactions?

(This one was found on the internet. We cannot corroborate its accuracy, but it is an amusing story...)

When Gandhi was studying law at the University College of London, there was a professor, whose last name was Peters, who felt animosity for Gandhi, and because Gandhi never lowered his head towards him, their "arguments" were very common.

One day, Mr. Peters was having lunch at the dining room of the University and Gandhi came along with his tray and sat next to the professor. The professor, in his arrogance, said, "Mr Gandhi: you do not understand... a pig and a bird do not sit together to eat," to which Gandhi replies, "You do not worry professor, I'll fly away, " and he went and sat at another table.

Mr. Peters, green of rage, decides to take revenge on the next test, but Gandhi responds brilliantly to all questions. Then, Mr. Peters asked him the following question, "Mr Gandhi, if you are walking down the street and find a package, and within it there is a bag of wisdom and another bag with a lot of money; which one will you take?"

Without hesitating, Gandhi responded, "the one with the money, of course."

Mr. Peters, smiling, said, "I, in your place, would have taken the wisdom, don't you think?"

"Each one takes what one doesn't have," responded Gandhi indifferently.

Mr. Peters, already hysteric, writes on the exam sheet the word "idiot" and gives it to Gandhi. Gandhi takes the exam sheet and sits down. A few minutes later, Gandhi goes to the professor and says, "Mr. Peters, you signed the sheet, but you did not give me the grade."

(This one was found on the internet. We cannot corroborate its accuracy, ...

This degree of zinging repartee seems very unlikely from someone who described himself as shy and tongue tied at that time.

If you read Gandhi's autobiography "The Story Of My Experiments With Truth" you will see that, during his studies in London he was rather shy and had trouble speaking in public

I was at a loss to know how to express myself 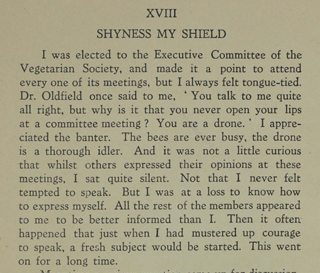 This shyness I retained throughout my stay in England ... 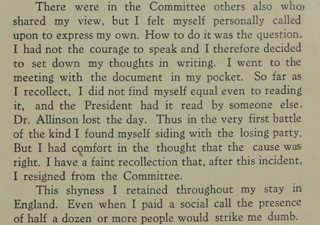 I can find nothing about a Professor Peters.

I can find no original source for the anecdote in the question. There are plenty of copies in the Internet but they all seem very recent and lack firm attribution - it seems unlikely that this anecdote was only passed by word of mouth between 1898 and 2014.

Of course, this doesn't mean the anecdote is untrue, but it does seem not to fit well with Gandhi's account of his own confidence in English at the time.

RedGrittyBrickRedGrittyBrick
24.6k33 gold badges9696 silver badges108108 bronze badges
1
Add a comment  |
4
Want to improve this post? Provide detailed answers to this question, including citations and an explanation of why your answer is correct. Answers without enough detail may be edited or deleted.

Not the answer you're looking for? Browse other questions tagged history politics quotes mahatma-gandhi .

16
Did Gandhi express admiration for Hitler early in WW2?
18
Did Gandhi support homeopathy?
8
Did Gandhi make racist statements about black prisoners?
10
Did Gandhi tell this story about sugar?
37
Did Gandhi call vaccination a barbarous practice?
13
Did Gandhi say “The most violent weapon on earth is the table fork”?
1
Did Mahatma Gandhi have a physical relationship with a man?
11
Are Socrates' 3 tests from a historical source?
65
Are Democrats more likely to believe Astrology is a science?