Do CFLs have a significant impact on your light bill?

I just moved into my own apartment, and I've taken quite an interest in being as energy-efficient as possible (simply because, hey - I'm paying the electricity bill now!).

I've been wondering - are Compact fluorescent lamp (CFLs) as efficient as they claim to be? I detest the light that they give off, but if they're significantly cheaper to use (especially in contrast to how expensive they are in comparison to normal bulbs), then I might be persuaded to pick up a few.

I work almost constantly, so I probably don't use more than 3 or 4 hours of electric light daily, anyway.

So, is it worth the investment (and inconvenience)? I'm just a bit skeptical of something that claims to save me money by being 4-6 times the cost of the alternative.

If saving ~$500usd/year is significant then yes. 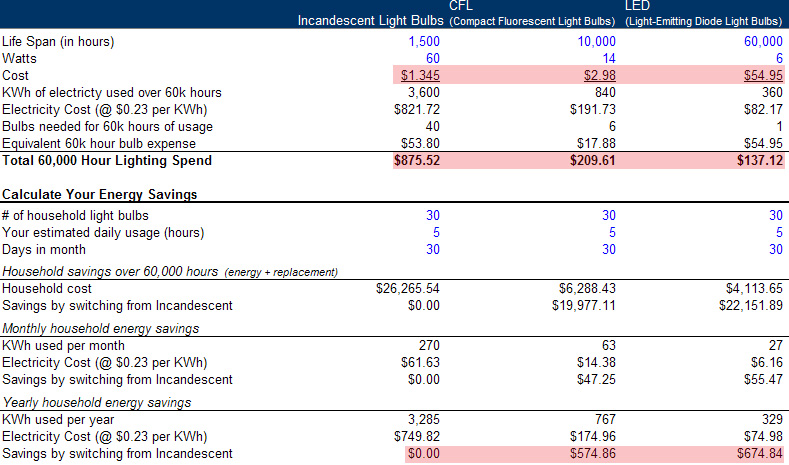 Not the answer you're looking for? Browse other questions tagged economics compact-fluorescent-lamps .

14
Are CFLs always more ecologic than incandescent light bulbs?
14
Do casinos have a negative economic and social impact on the neighborhoods they are located in?
27
Did China shut down a port for one COVID-19 case and did this closure have a bigger impact than the blocking of the Suez canal?