Will only 10% of the New Zealand population be religious by 2050?

I have seen this episode about religion from the documentary series "Through the Wormhole" and how it is disappearing and they say that it will have only 10% theists in New Zealand by 2050. Is this true?

You can view the documentary on YouTube and they discuss the subject at about the 23 minute mark.

It is likely that they did a simple projection of the current trends into the future to make this prediction. On the regular census that the New Zealand Government runs, they ask each citizen what their religious affiliation is. Here are the results for the last four censuses. 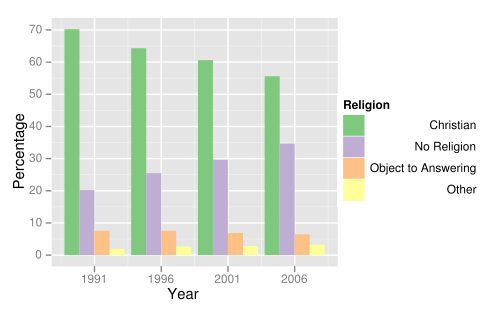 As you can see, the answer "No religion" is trending upwards at around 10% per decade. Christianity is trending downwards at about the same rate. The total of the categories "No religion", "Object to answering" and "Not stated" is at around 50% of the population in New Zealand. Christianity makes up about 43% of the total population in New Zealand.

If the rates stay constant, we would expect that after 36 years, the percentage of Christians in New Zealand will have dropped by 36% which would leave 8% of the population left as Christians. The same would be true for the No Religion group in the reverse direction, going up by 36% to 74%.

The percentage of non-Christian religions has been growing over the last four censuses, however the rate of change is smaller than the other two groups. At about 2% per decade, by 2050 they would make up 13% of the population, outnumbering Christians.

From this simple projection, they along with the "Object to answering" and "Not stated" groups would make up the remainder of the population.

This is a simple projection from existing trends and is not highly likely to be precisely correct however it does suggest that the prediction of less than 10% religious by 2050 is close to what we should expect.

We can get a more accurate picture by looking at the breakdown of Atheists by age.

The future is difficult to predict which is why we tend to avoid it here at Skeptics. These trends show what will happen if the forces at work do not change and the rates stay constant. Predicting for certain that the rates will stay constant until 2050 is beyond the abilities of science.

31
Is the religious population declining?
24
Is atheism the fastest growing “religion” in the history of the United States?
4
Is the “Reader voices strong opinion on atheists” letter a hoax?
13
Are atheists more generous than Christians?
6
Are the letters claimed to be sent by Muhammad authentic?
12
Do 75% of new Muslim converts in the US leave Islam within a few years?
8
Will the new Royal Adelaide Hospital have a Muslim-only prayer room while other religions share?