Is sugar one element away from cocaine or any other drug?

First of all I will assume that by sugar we mean sucrose, which is the common table sugar.

Here is the structural formula for sucrose:

If you are not familiar with chemical structures for organic compounds, note that every "corner" in a chemical structure like this is considered to be a carbon atom (C), even if it is not written for visual clarity (there may also possibly be hydrogen atoms, see the Wikipedia page on skeletal formulae for an extended explanation)

Here is the formula for cocaine: 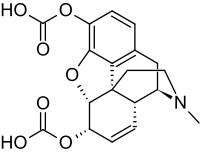 Obviously I could go on for a while listing all existing drugs but I guess there is no much point in doing that...

Now, if we take the claim literally, and we look at elements, then the claim is true. Sugar is made by 3 elements: carbon (C), oxygen (O) and hydrogen (H). Cocaine has the same plus nitrogen (N).

However, this is pretty meaningless as the majority of organic compounds contains C, O and H...

If the claim is to be read as one atom more then it is clearly false. And even if it were the case that would not imply absolutely anything in terms of the biological actions of either compound, as their 3D structures are clearly different.

"One element away" is pretty much nonsense, and there are lots of kinds of sugar. Let's ask a more targeted question:

Are some sugars closely related chemically to cocaine or any other drug?

Yes, but it's not cocaine. It's the most commonly used recreational drug, alcohol.

Ethanol, the alcohol in beverages, is

Glucose, a simple sugar, is

Even if you know no chemistry, by inspecting the diagrams you can see that by breaking the sugar into smaller pieces you can turn at least part of it into something resembling an alcohol. In fact, you can turn one glucose into two ethanol and have enough left over to make two CO2 molecules. The reaction is a bit complicated and is usually carried out by a living organism, like brewers yeast. See Ethanol fermentation on Wikipedia for the details.

Perhaps what they are really talking about is the link between sugar and opiates in as far as a predisposition found in users of both.

In other words a similar chemistry in the brain for both.

Not the answer you're looking for? Browse other questions tagged chemistry recreational-drugs sugar .

29
Is margarine "one molecule away from plastic"?
16
Does a dog's brain secrete the same substances when it sees its owner as humans do when in love?

16
Is HFCS (High Fructose Corn Syrup) bad for you?
29
Is margarine "one molecule away from plastic"?
9
Is marijuana an effective medicine for any one of these medical conditions?
23
Can thunderstorms curdle milk?
13
Is diet soda as bad for your teeth as regular soda or methamphetamine?
5
Can marijuana cause seizures in children?
7
How prevalent is the use of drugs (other than alcohol) to spike food/drinks?