Are swastikas commonplace in Japan?

Comedian David Sedaris performed at the Sydney Opera House. During his performance, he gave an anecdote about being in a store in Japan. (Confirmation link, but I heard about this elsewhere)

He was looking at a T-shirt with a bear with a fish in its mouth, a river, and a bright yellow swastika. Sedaris looked at the T-shirt with some puzzlement. A shop assistant noticed his puzzlement, and helpfully explained what he obviously was pondering about: the fish was a salmon!

Are swastikas considered so normal in Japan that a shop-keeper wouldn't have thought of that being the source of Sedaris' confusion?

Yes. However, he neglected to mention one detail during his performance.

Swastikas are a common symbol in Buddhism. Buddhism and Shinto are the two most common religions in Japan (with people often practicing both).

More likely than not, the swastika in question was not representing Nazism, the ideology of one of Imperial Japan's allies in World War II.

The ÕŹŹ ( "ban" ) character is common at many temples, and predates Nazism by many centuries. Also note the mirror image and the rotation compared to ÕŹÉ, the swastika used by the German Nazi party.

Japan makes no particular associations between the character and the Third Reich - it appears on many street maps, tourist guides and the like.

It's carved in stone in front of Sensoji, one of the largest Buddhist temples in Tokyo and a major tourist attraction. 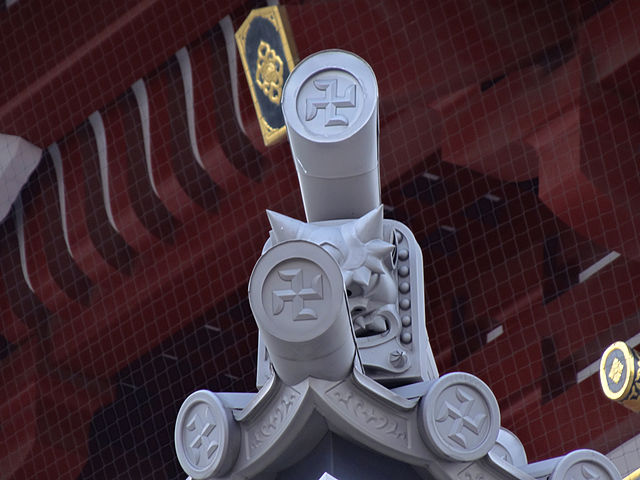 The maps printed in English avoid the character over prolonged complaints from the tourists. Still used extensively in Japanese online maps in areas like Kyoto, where there's a temple every few blocks.1

Other segments of Japan, like publishing, have learned the hard way what the rest of the world thinks but they aren't that interested in changing anything. After all, they had it first. There's also a "KKK Building" in Ginza2 and a popular beverage called Calpis.

Not the answer you're looking for? Browse other questions tagged politics japan .

5
Does Japan export food that is unsafe to eat in Japan?
42
Is Islam banned in Japan?
5
Did Taro Aso say that Japan should emulate the Nazis in amending the constitution?
31
Are there more than 50,000 people in Japan over 100 years old?
51
Did Obama apologize for the USA using nuclear weapons on Japan?
22
Are more than 40% of millenials in Japan virgins?