Does water have a memory as claimed in homeopathy?

In homeopathic remedies the original substance is often diluted to a point where statistically there should be not a single molecule left of the original substance. The most common explanation by homeopaths, on how it still works although there is no substance left, is that water has a memory. That the "essence" or "imprint" of a molecule can stay in water and continue to have some effect even after the molecule itself is removed.

Is this at all possible from a physical point of view?

Can water molecules (in the liquid phase) form structures that are stable over long periods of time?

Water forms strong intermolecular forces between its molecules. This is called hydrogen bonding and is a form of permanent dipole/permanent dipole interaction. Oxygen is more electronegative (its nucleus attracts a bigger share of the electron cloud of the covalent bond) than hydrogen. This causes water to form a permanent dipole where the oxygen has a small negative charge and the hydrogens have small positive charges. 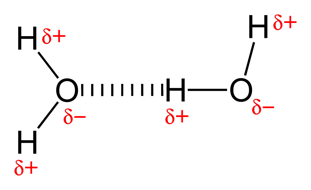 This causes electrostatic attraction between water molecules and they can form structures for a small amount of time. Other molecules in the water can affect these short lived structures and water does retain some 'memory' of these molecules.

This is how some proponents of homeopathy claim it works. This memory somehow has an opposite effect to the toxin or other chemical that was diluted, although there has not been any mechanism proposed for this.

However, the duration of the water memory has been scientifically tested and shown to be very short (less than one billionth of a second). This means that the memory has gone by the time the patient even takes the dose.

Even if water did have a long term memory, it would not prove homeopathy. There would also need to be evidence that this water memory had the medical effects that have been claimed.

This was demonstrated by Nobelist Luc Montagnier virologist (discoverer of HIV) in his study and his results were confirmed by his colleges and other scientists. This is well demonstrated and explained in the Water Memory documentary.

Basically in one of their recent experiment (2009) they've recorded EMF reading of water which was containing diluted DNA and exported into the audio file (wav), then sent from France to University of Sannio in Italy (famous for the quality of lab specialised in molecular biology) where tube of purified water was "listening" to the recording for about an hour and "memorizing" it.

The test was successful. The water it-self started to emit reconstituted DNA signals.

So according to Prof Montagnier, the highly diluted DNA in water has retained the memory of the original DNA traces and it returns them under the form of electromagnetic signals.

Currently the classic biology doesn't recognise such phenomenon, but this study can be the turning point for molecular biology, physics, chemistry, medicine and so on. In 2014 UNESCO hosted meeting to discuss this controversial 'memory of water' research.

Not the answer you're looking for? Browse other questions tagged homeopathy physics .

20
Has Nobel Prize winner Luc Montagnier found experimental evidence for homeopathy?
8
Do water molecules change when you talk to them?
11
Do extreme homeopathic dilutions still retain quantities of the starting materials?
8
Do the effects of Chromotherapy have support in scientific literature?
3
Will individuals respond differently to homeopathic remedies prepared with unboiled vs. boiled water?

20
Has Nobel Prize winner Luc Montagnier found experimental evidence for homeopathy?
45
Has most peer-reviewed research on homeopathy given positive results?
4
Does the “Belfast” study by Madeleine Ennis prove that water memory exists and homeopathy might work?
18
Did Gandhi support homeopathy?
3
Are there mainstream medical schools that teach homeopathy or alternative medicine?
11
Do extreme homeopathic dilutions still retain quantities of the starting materials?