Are "ectomorph", "mesomorph" and "endomorph" valid and useful descriptors?

One of the proposals in this theory is that there are three basic elements, or somatotypes, that contribute to your body type. These somatotypes and their associated physical traits are: 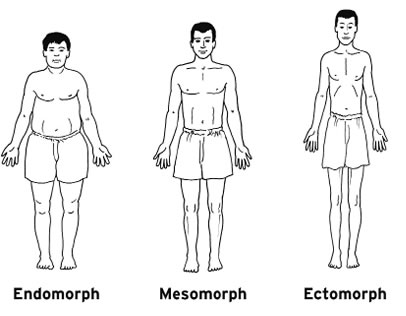 I occasionally hear people refer to their somatotype as if it was an intrinsic property of their constitution, e.g. "I'm an ectomorph, so that's why it's very hard for me to build muscle".

Furthermore (and now it get's weird) he claimed that an individual's mental characteristics could be predicted from the composition of the somatotypes. For example, endomorphs might be good-natured but lazy, ectomorphs intelligent but neurotic, etc.

So there are a few intertwined claims here:

There are three elements/somatotypes whose composition

Is there any validity to this theory or can we put this to rest along other pseudosciences from the 1940s?

The sources I find suggest that the validity of the theory is still up for debate (surprisingly).

Later, other photographs were taken by W. H. Sheldon, a researcher who believed that there was a relationship between body shape and intelligence and other traits.

Mr. Sheldon has since died, and his work has long been dismissed by most scientists as quackery.

At the same time, academic researchers are conducting empirical studies as recently as 2013 that appear to confirm Sheldon's hypothesis:

The questionnaire was administered to 242 (two hundred and forty two) University of The Gambia students by stratified sampling technique based on body types (whether endomorph, mesomorph or ectomorph). The physical body type an individual possesses has an influence on the behaviour or personality of that individual, as posited by Sheldon’s constitutional theory. This was confirmed, even when applied in the African society specifically in The Gambia, by this study. [emphasis mine]

Investigated whether measures of personality considered compositely and individually differ significantly among groups differentiated according to self-perceived somatotype (PSS). The Bodv Cathexis Scale, Eysenck Personality Inventory, and Tennessee Self-Concept Scale were employed to assess personality in 285 college males, and the indices of somatotype were measured using the Perceived Somatotype Scale. MANOVA revealed significant differences in global personality among the groups. Univariate analyses indicated that the PSS groups differed significantly in self-concept, extraversion, neuroticism, and body cathexis, while the PSI groups differed significantly in extraversion. Apparently, the male personality is partly a function of the body build perceived as self, the image viewed as ideal, and whether a discrepancy exists between the figures perceived as self and ideal.

A Google scholar search for "Somatotype personality", limited to publications since 2010, produces almost 500 results, which suggests this is still an active area of research.

Additional caveat: I am not qualified to assess whether the research present is correcting for discipline appropriate factors, and thus whether their findings are valid. However, taken at face value, it looks like there is some relationship between somatotype and personality, and all of these papers are referencing the theory. Some of them are using more detailed measurements however.

EDIT: Some additional information in response to one of the comments: Yes, one's somatotype can change over time, for at least some groups (I speculate: for anyone). For example, see this study, in which 67% of subjects changed dominant somatotypes during puberty.

Copied from a similar question posted on the Physical Fitness site:

Somatotyping is essentially stereotyping (assigning an “empirical generalization” to an individual), as to whether this is valid / acceptable is another matter, but have a read of: All Stereotypes Are True, Except... I: What Are Stereotypes?

Anyway Somatotyping is taught, in English Schools and Universities, as a valid means to assess an individual's suitability / potential to become an elite performer in certain sports eg. basketball, gymnastics, distance running, rowing, wrestler.... Even the BBC covers the technique.

It's generally packaged up / taught under the Applied Anatomy or Kinanthropometry banners, and is backed by a number of studies that have shown a correlation between certain physical characteristics and achievement at an elite level in certain sports e.g.

There are also papers that show the methodology is not applicable to the selection of athletes in multi discipline events, or where random and / or environmental variables play a significant role eg.

In the last few decades Heath-Carter and Rempel have formularised the categorization process, and the technique has been used is a number of anthropometric studies eg.

There have also been numerous studies that show a neurobiological effect / benefit of physical exercise, to quote wikipedia:

People who regularly participate in aerobic exercise have greater scores on neuropsychological function and performance tests. Examples of aerobic exercise that produce these changes are running, jogging, brisk walking, swimming, and cycling. Exercise intensity and duration are positively correlated with the release of neurotrophic factors and the magnitude of nearly all forms of exercise-induced behavioral and neural plasticity; consequently, more pronounced improvements in measures of neuropsychological performance are observed in endurance athletes as compared to recreational athletes or sedentary individuals. Aerobic exercise is also a potent long-term antidepressant and a short-term euphoriant; consequently, consistent exercise has also been shown to produce general improvements in mood and self-esteem in all individuals.

which would appear to accidentally / partially support Sheldon original work.

For a bit of background and a list of a dozen papers that support the technique, in sports selection, see the BrianMac site.

Not the answer you're looking for? Browse other questions tagged psychology physiology .

44
Are different prices in wines justified by taste?
23
Are women's hands colder, and their hearts warmer?
9
Are simian lines and personality correlated?
14
Is the Q-on-the-forehead test a valid method of determining extraversion and ability to lie?
24
Are secular/atheist adults less vengeful, nationalistic, militaristic, authoritarian and more tolerant?
0
Is there a distinction between esteem and confidence and are they independent of each other?
38
Are blue light filters, not blue lights, on phones and computer screens harmful to sleep?