Did the 1938 radio broadcast of 'The War of the Worlds' lead to mass hysteria?

I've heard it so many times that I considered it a fact. 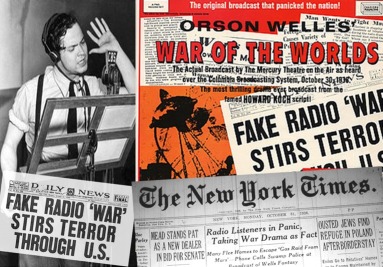 In 1938 Orson Welles' radio adaption of H.G.Wells' The War of the World incited a nationwide panic:

All across the United States, listeners reacted. Thousands of people called radio stations, police and newspapers. Many in the New England area loaded up their cars and fled their homes. In other areas, people went to churches to pray. People improvised gas masks. Miscarriages and early births were reported. Deaths, too, were reported but never confirmed. Many people were hysterical. They thought the end was near.

By the middle of the hour-long program, hundreds of thousands of Americans had bought the hoax, believing that martians had actually landed on Earth.

But here it says:

[a new book offers] compelling evidence that the panic and mass hysteria so readily associated with The War of The Worlds program did not occur on anything approaching nationwide dimension.

Like many media-driven myths, claims about the 1938 radio dramatization seemed too good, too delicious, to be true. Those claims, essentially, were that Americans by the tens of thousands—even the hundreds of thousands—were pitched into panic and mass hysteria by listening to the radio show.

It’s true that calls surged in many parts of the country, especially in metropolitan New York and New Jersey, but many of the callers were seeking confirmation or clarification, which is an altogether rational response.

... newspapers seized the occasion to bash radio in the aftermath of the show. This unrelievedly negative commentary reinforced the notion that The War of the Worlds program had sown panic and mass hysteria among Americans.

Here is a Youtube clip in which W. Joseph Campbell talks about the media myth.

Is it indeed just a myth that Orson Welles' radio broadcast caused a widespread panic?

What are the most realistc estimates of how many people actually paniced?

It seems that there was some mass hysteria due to the broadcast, but the numbers are greatly exaggerated.

The myth originates from a book by Hadley Cantril,"The invasion from Mars: a study in the psychology of panic":

However, such a strong statement was based on a poll of only 135 people. Furthermore, the calls to police forces only increased by 40% (this includes any kind of calls, not necessarily related to the mass panic) and one could expect to see the effects of mass panic, for example, in a spike of the number of car accidents.

Bainbridge (1987) is critical of Cantril for citing just a few colorful stories from a small number of people who panicked. According to Bainbridge, on any given night, out of a pool of over a million people, at least a thousand would have been driving excessively fast or engaging in rambunctious behavior. From this perspective, the event was primarily a news media creation.

Miller (1985, 100) supports this view, noting that while the day after the panic many newspapers carried accounts of suicides and heart attacks by frightened citizens, they proved to have been unfounded but have passed into American folklore. Miller also takes Cantril to task for failing to show substantial evidence of mass flight from the perceived attack (1985, 106), citing just a few examples and not warranting an estimate of over one million panic-stricken Americans.

Goode (1992, 315) agrees with Miller’s assessment, but also notes that to have convinced a substantial number of listeners “that a radio drama about an invasion from Mars was an actual news broadcast has to be regarded as a remarkable achievement.”
—source

Not the answer you're looking for? Browse other questions tagged history radio .

12
Did the Ottoman sultans kill their own brothers?
15
Did the Swiss not produce anything of importance aside from cuckoo clock?
10
Can voice signals be radio-transmitted to a human head acting as a radio receiver?
14
Did a radio DJ lock himself in the studio and play the same song on repeat?
8
Did James Buchanan say there were "too many educated people in the world"?
20
Did Stalin kill more than 10 million People?
10
Is the Kabul evacuation "the largest airlift of people in history"?