This part of Loose Change contains footage of the first plane crashing into the first World Trade Center.

In it, Dylan Avery claims that there is a flash under the plane before it crashes into the tower, and comes to the conclusion that this was a missile.

Is there any credible evidence to support this claim, and what is a more likely explanation for the flash shown in the video?

The youtube video replays this part over and over again, here is the "flash" under the plane alleged to be a missile launch. 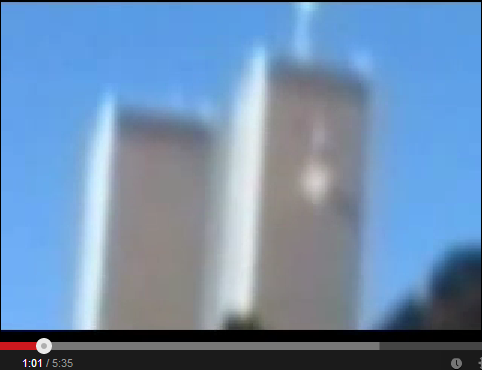 Obviously this is a greatly enlarged portion of a video recorded from a few blocks away. It is far too small for there to be any resolution of the details of the aircraft.

A credible alternative explanation might be that this is the result of the nose of the aircraft striking the glazed exterior of the building, perhaps the outburst of shattered glass fragments catches the sunlight.

But basically the youtube video is an over-enlarged small area of the original video frames. From that distance there isn't enough video resolution to provide compelling evidence of an airliner firing a missile.

31
Was the BBC report of the WTC-7 falling before it happened a scripted event?
22
Did a plane hit the Pentagon on September 11, 2001?
21
Is there any other skyscraper that was destroyed totally just by fire except the three World Trade Center towers?
68
Did planes crash into the WTC on 9-11?
12
Was a pair of handcuffed hands found near the World Trade Center after 9/11?
5
Did Khalid Sheik Mohammed claim that Bush's actions prevented a second wave of attacks against the US?