Do hieroglyphs in Egypt depict aircraft?

In the article, Impossible? 3,000 Year-Old Hieroglyphics Depict Modern Day Technology! Markings of the Fallen Angels?, they claim that there are aircraft depicted in 3000-year-old Egypt hieroglyphs:

Decorating an Egyptian temple wall at Abydos are strange hieroglyphs which depict what appears to be modern day aircraft. 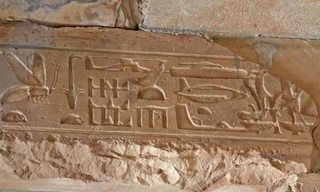 Is there a natural explanation for this not involving the supernatural claims of the article (i.e. angels)?

I understand that this is speculative, but it is a speculative question. Other people have also proposed this same explanation. See here, here, and here.

One factor that contributes to the current appearance of the hieroglyphs (regardless of what that appearance is interpreted as) is the palimpsest effect.

Most Egyptologists strongly disagree that these carvings are anything but hieroglyphs. They guess that a recarving took place. Hieroglyphs were carved into the temple's sandstone wall. After some time, for whatever reason, new hieroglyphs were carved, but the hieroglyphs were only partially erased from the sandstone wall. Some of the old characters remained behind the new characters. People viewing the images today think the pictures look like modern modes of transportation. However, any resemblance to today's machines is simply a coincidence.

This is part of an inscription where one king's name was later overwritten with another's.

from The Abydos-Hieroglyph does NOT depict a Helicopter 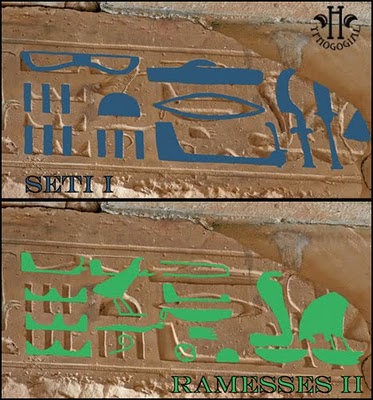 Ancient Egyptian hieroglyphs are mainly phonetic writing system. A phonetic writing system is like English; the pretty pictures don't mean that's what is being described. Even if the ancient Egyptians saw these things and wrote of them, we would have not realistic looking glyphs but a normal hieroglyphic and thus phonetic description. If you were describing something in a letter, the description would be written and not some writing a out of place drawing then some more writing. The ancient Egyptians were perfectly capable of detailed written accounts.

Read Frauds, Myths and Mysteries by Kenneth Feder, an archeologist, or check out Jason Colavitos's website.

Not the answer you're looking for? Browse other questions tagged history aviation egypt .

64
Is it possible to cause problems to an aircraft pilot with an "over-the-counter" laser?
6
Did British officers in Egypt use Indian soldiers to translate all radio messages into Hindustani?
12
Do magicians in Egypt turn sticks into snakes?
8
Are movies with aircraft incidents not shown on planes?
30
Did the Hebrew exodus from Egypt ever happen?
14
Can aircraft be hacked and "commandeered remotely"?
2
Did Herodotus call Egypt the "Gift Of The Nile"?
1
Has Egypt sold two French-made Mistral warships to Russia?
4
Has the US Air Force studied squid to improve aircraft camouflage?