Did Lyndon Johnson have an amphibious car?

I came across an info graphic that says that former U.S. president Lyndon B. Johnson had an amphibious car and would drive guests into the lake while screaming about the brakes. Is this true? 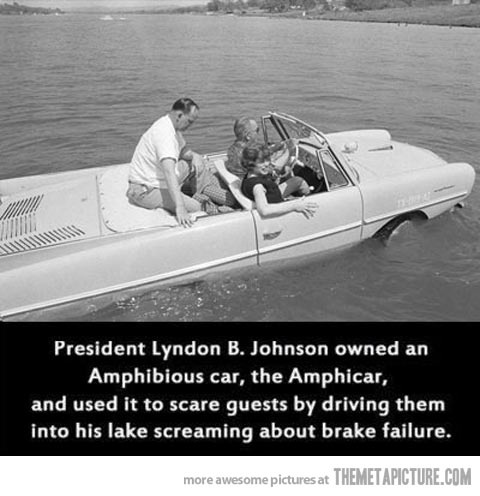 I hope this helps... http://www.nps.gov/lyjo/planyourvisit/presidentialvehicles.htm

Built in Germany from 1961 to 1968, the Amphicar is the only civilian amphibious passenger automobile ever to be mass produced. A total of 3,878 vehicles were produced in four colors: Beach White, Regatta Red, Fjord Green (Aqua), and Lagoon Blue--the color of President Johnson's Amphicar.

President Johnson enjoyed surprising unsuspecting guests when taking them for a ride in his Amphicar.

The President, with Vicky McCammon in the seat alongside him and me in the back,was now driving around in a small blue car with the top down. We reached a steep incline at the edge of the lake and the car started rolling rapidly toward the water. The President shouted, "The brakes don’t work! The brakes won’t hold! We’re going in! We’re going under!" The car splashed into the water. I started to get out. Just then the car leveled and I realized we were in a Amphicar. The President laughed. As we putted along the lake then (and throughout the evening), he teased me. "Vicky, did you see what Joe did? He didn’t give a damn about his President. He just wanted to save his own skin and get out of the car." Then he’d roar. --Joseph A. Califano, Jr

44
Does the U.S. President have a red phone?
20
Did Obama have a marine demoted for correcting him?
38
Are Kinder Surprise eggs banned in the US?
25
Is using cruise-control dangerous in the rain?
11
Can you legally drive away when Wisconsin police officer knocks on your car window?
26
Are recent claims from India of a car fueled by water and calcium carbide legitimate?
2
Did 20-30 roving Somalian immigrants threaten to rape a Lake Calhoun, MN resident?
11
Can Doom run on a car's infotainment system?
3
Does the Sion electric car solar cells provide enough charge for up to 30km travel per day?