If American churches paid taxes, how much revenue would that generate? 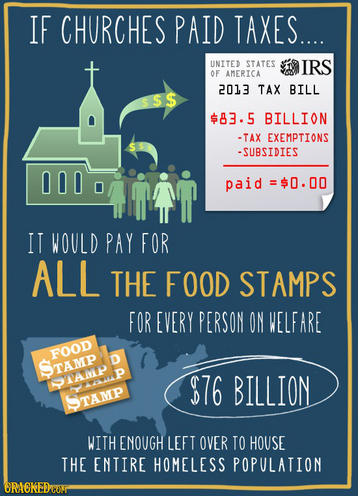 Is this image correct? Would taxing churches generate that much money, and would that much money be enough to cover food stamps and house the homeless? At what tax rate would churches have to be taxed (for example, a corporate tax rate, small business tax rate, etc.)?

(If you feel this question is overly broad, I'll accept an answer just about how much money could be gained at what rates from taxing churches, rather than what this money could cover).

Summary: The graphic is based on an article from the Council for Secular Humanism which is almost entirely incorrect

It seems to be the case that the infographic is based on the report "How Secular Humanists (and Everyone Else) Subsidize Religion in the United States"., by the Council for Secular Humanism. The figures seem to agree, so it's reasonable to assume that the source of the graphic is the report. To assess the reliability of the graphic, we therefore have to assess the reliability of the report.

The annual amount given to religious organisations in 2009 was around $100 billion. We know this because the article cites it, and claims 'Giving USA' as a source. They claim that $70 billion is the tax due. The article is asking us to believe that churches, if taxed fairly, would pay 70% of their income in tax. (That's income, not profit.) No other corporation, profitable or not, pays anywhere near that level of tax in the US. A 70% rate is not "paying taxes the same as everyone else". (The Ford Motor Company, for example, had around $140B in income the year to 30 JUN 2015 and paid less than $2B in tax.)

Now let's look at the claims in detail.

The first thing that needs to be noted is that this report is not from a neutral source. The Council for Secular Humanism exists to promote secular humanism, which largely defines itself by the absence of religion, and Free Inquiry is not a peer-reviewed journal. This does not mean we reject it, of course - it means that we should apply a skeptical analysis to the report, which the rest of this answer will do.

These are the principal claims made by the report as to subsidies to churches:

The report seems to imply that these tax breaks are special to churches. In fact only one is (the parsonage allowance). The rest are available to other non-profits, whether they are religious or not, and whether they do any charitable work or not. For example, fee paying private prep schools get the same exemptions as a church, even if their sole purpose is to provide expensive education to the rich, who pay a large fee in return. It is likely that most churches could register for tax exemption under 501c, even if ‘religion’ were removed as one of the criteria. Community theatres and fraternal organisations (e.g. Moose Lodges and college fraternities) do this all the time. Secular humanist organizations are registered for tax-exempt status. The American Humanist Association specifically has tax exemption in the religious category., which means that atheist religious organizations are getting the same tax breaks as 'believing' religious ones. Even the Council for Secular Humanism itself is tax exempt.

Let's look at the claims of the individual kinds of subsidies.

The report claims that “the subsidy to religion in the form of lost corporate tax revenue to the federal government revenue is about $35 billion annually". It has calculated this by taking the total annual donations to religious organizations (which it elsewhere states to be $100billion) and applying the top rate corporate tax rate to all of it. But corporate tax doesn’t work like that. Buinesses are allowed to deduct their expenses before their taxable income is calculated. Churches typically use most of their income on staff salaries, building maintenance, office equipment and the like – all of which are legitimate expenses, and would be deducted from income by any normal business. As we saw above, churches as they are now virtually never make a profit, and so would pay virtually no corporate tax. If they did make a profit they would not qualify for tax exempt status under today's rules. (Let's leave aside the fact that even highly profitable multi-national industry corporations don't pay 35% tax - 12% is more normal, and it's 12% of their profit, not their income). As we also saw above, most churches could also register as tax-exempt under other parts of the 501c regulations.

The $35 billion Federal tax figure is a fantasy, unsupported by anything from tax law or practice.

This falls by exactly the same argument as the Federal subsidy.

The Council is very vague about how it arrives at its figure for the total value of church property. It claims (without support) that the average value of a church building is $1.7 million. However a quick look at churches for sale show that - even in a high real estate area - $1.7 million dollars will buy a modern well-equipped church suitable for many hundreds or thousands of worshippers. Most church buildings are much smaller than that. They also state that they arrived at the figure by multiplying the number of congregations by their claim of the average value of a church building. Many congregations do not own buildings at all, renting space to meet as required, or sharing space with other congregations. There is no indication that the report took this into account.

Churches have no special treatment regarding property taxes compared with other non-profits. Non-profits are frequently (not always) exempt from property taxes, but churches are treated equally with them We saw above that churches would almost certainly be able to register for tax-exempt status without the religious status. Many secular humanist organisations are probably tax-exempt, just like churches. It might be worth noting some other organizations that claim tax exemption here, including private schools, many of which have the sole purpose of providing fee-paying education to those rich enough to afford it. While the property tax exemption could be explicitly abolished for churches (putting them at a disadvantage compared with Moose Lodges, College Fraternities and private schools for the rich), in reality the $26 billion claimed would (probably) not materialize. The Property Tax figure is highly suspect, and is a benefit common to all non-profits, whether religious or not.

Once again corporations are not taxed on their investments, but on their profits. If your investment income is offset by business expenses, it isn't taxed.

Payments under the Faith Based Initiatives programs are not simply made to churches for their own benefit - they are for specific charitable and social purposes. For example, if a church is running a homeless shelter, or a food bank, the Faith based initiatives program is allowed to pay towards the running of the shelter - in the same way that government is allowed to pay towards a shelter run by a non-religious organization. This is not a payment to the church, and the church does not profit from it. There are accounting controls in place to ensure this is the case. If all payments like this counted as 'subsidy of religion', then every payment to a secular charity (Oxfam, Save the Children or even UNICEF) would count as a 'subsidy of secularism'.

An aside - Churches as businesses

We calculated the subsidies to religions under the assumption that religions are more like for-profit corporations providing entertainment (such as movie theaters or amusement parks) rather than charities.

This is a highly selective comparison. Churches have many differences with a movie theatre – they don’t charge admission, and they don’t make a profit for two. It’s also worth pointing out that if churches did make a profit, they would fail the test of tax exemption under 501c, whether or not they were religious foundations. The report could have chosen other secular organizations for comparison – if we truly believe that churches are in the entertainment business, then a community theatre would probably be a better comparison. As we saw above community theatres are usually tax exempt.

The real level of subsidy is much, much less than $70 billion, and of that tiny subsidy virtually all could be claimed by a similar non-religious organization.

Not the answer you're looking for? Browse other questions tagged united-states religion taxes .