Will a warming climate cause more crime?

The Register reports, somewhat skeptically, that an american consultant has produced an analysis claiming that climate change will lead to an increase in crime.

The paper, published in the Journal of Environmental Economics and Management (original article paywalled) claims that:

Is this analysis remotely credible, or is this just another example of someone leaping on the Climate Change bandwagon?

The author of that paper, no matter how convoluted he is trying it to appear, basically just assumes that there are no other parameters in crime rate per capita than temperature and precipitation. Also the model is linear and lacks any proper validation. The assumption that relation between temperature changes within a year and crime rates can be interpolated and imposed on general climate change pattern is completely baseless.

I document a striking relationship between monthly weather patterns and crime rates. Across a variety of offences, higher temperatures cause more crime.

For it to be proven, one must show that the relation between temperature and crime is stronger than between time of the year and crime (as well as region and crime - yes, south regions of US are more criminal and warmer, but there is no proof that one is related to another), that is the difference is outside the standard error (at least). The uncertainty calculation is omitted from paper and it is not clear if the resulting numbers are artefacts or statistically significant results. Any sort of cross-validation is also absent.

The methodology of data selection looks like cherry-picking as well (removing outliers is quite a controversial topic in statistics, and this probably is not the worst example of it, but if someone removes data from sample usually it means it doesn't support the theory).

I take several final steps to clean the crime data. First, I drop all county-by-year records in which U.S. Census estimates indicate that the county had a population of fewer than 1,000 persons. Second, I drop all county-by-year records in which zero crimes were reported in all months, or in which weather data are missing for at least one month. Third, I eliminate outliers (almost all of which appear to be reporting errors) by dropping county-by-year observations in which the crime rate in any month is greater than twice the value of the 99th percentile crime rate for the entire sample. Finally, to minimize problems with heteroskedasticity in the data, I drop counties in which the mean crime rate is above the 99th percentile or below the 1st percentile for the entire sample.

Moreover, crime rate plots by year (presented by the author) clearly show that the crime rate is going down since 90's while climate is slowly warming up. This is in direct contradiction with the conclusions of the paper. 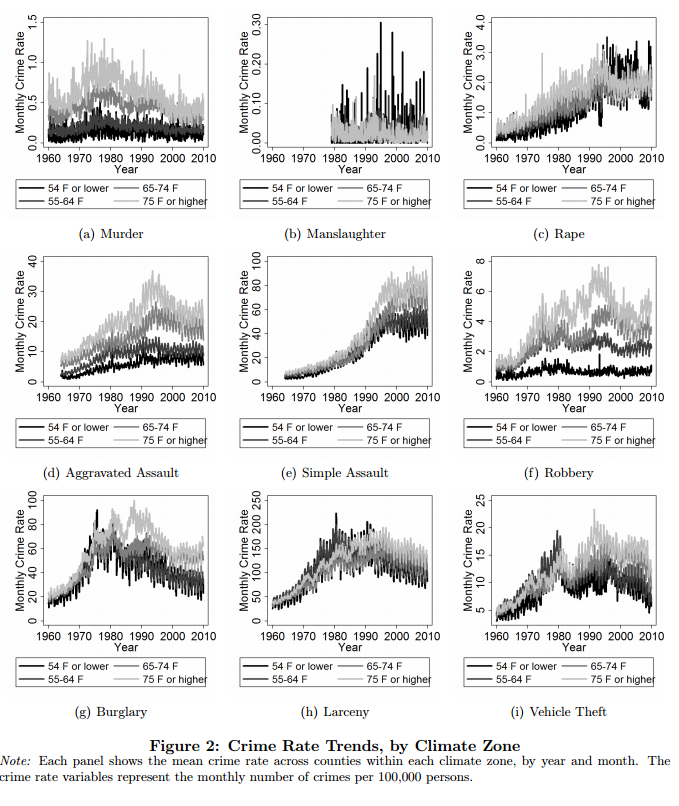 All in all, while the general idea of the claim under investigation seems plausible, the methodology of this paper is far from drawing any robust conclusions. It lacks a few important steps which should be included in building any statistical forecasting model (fundamental model justification, variable selection, dealing with collinearity issues, cross-validation, uncertainty handling, etc.).

Not the answer you're looking for? Browse other questions tagged climate-change criminology forecasting .

26
Does CO₂ cause Global Warming?
2
Will a warming world directly damage human health?
39
Is Matt Ridley's assertion that the most extreme of the IPCC climate projections is based on very implausible assumptions correct?
25
Will global warming reduce available oxygen?
48
Does the logarithmic nature of global warming invalidate climate change claims?
10
Do cows contribute more to atmospheric warming than cars?
29
Did the US Climate Reference Network Show No New Warming Since 2005 in the US?
12
Will global warming save millions of lives?