Do Japan's teachers need to bow to the Emperor?

Is this a real custom?

Essentially the opposite of the claim is true.

According to Japan: Between Myth and Reality by Khoon Choy Lee, Singapore ambassador to Japan, writing of his experience as a teacher in Japanese occupied Malaysia at page 19:

My contact with Emperor Hirohito was more of a spiritual one. Every morning, students and teachers had to bow to the East, towards the direction of the Emperor's throne.

Concerning an earlier time period, see Emperor of Japan: Meiji and His World, 1852-1912 which at page 440 which explains:

Uchimura Kanzo (1861-1930), a teacher in a high middle school, was asked (along with the other teachers and students) to bow before the imperial signature

At first Kanzo refused to bow, but he was eventually persuaded by the principal to bow.

The Imperial edict, or the Emperor's picture, was hung up, and the students were required to bow before it. One of the teachers in the school preparatory to the University, on conscientious grounds, refrained from doing this. His action raised a storm of indignation, and he was dismissed

The source goes on to explain that a newspaper was forced to close (but reopened under a different name) because the editor discussed the issue.

Emperor Hirohito expected everyone to bow to him. After he died in 1989, Akihito became Emperor and bowing was no longer necessary for anyone, as explained in the 26 August 1990 New York Times article "Japan's Imperial Present".

Since becoming Emperor, he has established an informal style, stooping, for example, to shake hands with children and the handicapped, in contrast to his father, who expected everyone to bow to him.

Because this doesn't have an actual answer yet...

The other answer, which describes this claim as the opposite of the truth, was true before 1945. In the post-1945 liberal democracy, nobody in Japan is forcibly required to bow to anyone. This would violate Article 21 of the Japanese Constitution.

In 2003, the Japanese government passed a law requiring teachers to stand for the national anthem, as sitting down implies disrespect to the state. This in itself has engendered years of mass protest in the Osaka region especially. I can't imagine what would happen if people were legally required to bow.

The current Emperor is known for touring around the country. He visits many places and talks with many different people, and gets there by taking ordinary streets. I myself have accidentally crossed paths with his car twice. It would be quite a hassle if people were formally require to bow to him as he passed, let alone legally required.

The claim that everyone is required to bow to the Emperor besides teachers is a pure myth.

edit: For the purposes of illustration, here is a totally gratuitous photo: this shows an incident in 1951 where the students of Kyoto University posted a signboard outside their campus when Emperor Showa (Hirohito) came to visit, directly accusing His Majesty of murdering their peers in World War II and asking him to answer for his crimes. The children (or adopted orphans) of some students also participated in the protest. This is totally legal under the postwar constitution. 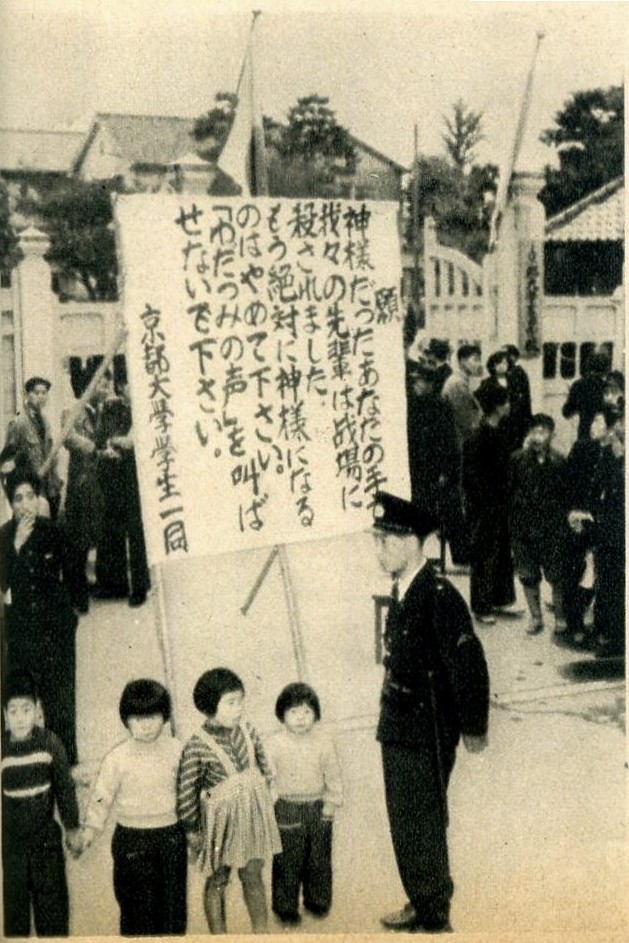 Not the answer you're looking for? Browse other questions tagged japan .

7
Did Master Stone Masons have to Bow to the King?

8
Does warm green onion cure the common cold?
44
Is Fukushima reactor No. 4 on the verge of catastrophic failure that will destroy the world?
5
Did Taro Aso say that Japan should emulate the Nazis in amending the constitution?
5
Is "Fukuppy" a mascot of the Fukushima nuclear accident?
13
Is the Japanese emperor forbidden from eating fugu (puffer fish)?
5
Must Japan's population pay for any accident caused by nuclear power plants sold abroad by Japanese companies?
2
Is a giant wolffish the result of the Fukushima Daiichi nuclear accident?