Does Marijuana deposit four times the tar in the lungs as tobacco?

This picture is from Emily Miller's Facebook page shows one lung divided into two parts one labeled Tobacco and one labeled Marijuana. The Marijuana side is substantially less-healthy looking and the the picture's caption reads, 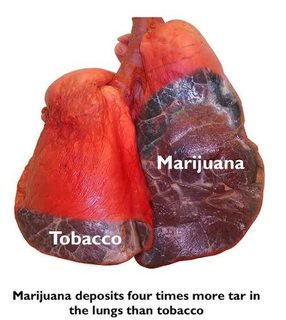 Obama hails CVS for stopping selling tobacco products but has no trouble with smoking marijuana. This photo from

Yes, it does, approximately 3 times that amount by weight, but that's not the whole story. You should consider other factors too in determining whether this means it is more harmful:

Firstly, when people smoke cannabis leaves or buds, they smoke them in a rolled cigarette which is usually larger than a tobacco cigarette. This would suggest that not only does cannabis smoke contain more tar, but that cannabis users inhale more smoke. In the outset, this seems worse.

Consider also, however, that cannabis smoking is often a social activity, and that people may not actually smoke much of a joint to themselves in the main. It may also be the case that cannabis smokers may not smoke as often as cigarette smokers. Both of these facts may suggest that cannabis users don't typically inhale as much tar overall, as actual amount of smoke inhaled could well be 1/3rd or less of the smoke inhalation of a regular smoker.

Equally, a portion of cannabis smokers will also smoke tobacco.

In considering the content of tar, you may also consider that low-tar cigarettes haven't be shown to actually reduce risk of cancer, and hasn't been shown to reduce emphysema either.

The basic conclusion of this is that yes, we know that cannabis smoke contains more tar, but we don't know that that makes it more harmful, nor do we know whether cannabis users actually inhale more tar, even though cannabis contains more. The answer to your question is yes, but whether or not the difference in tar content impacts health is undetermined.

It appears marijuana leaves about 3x the tar as cigarettes.

As compared with smoking tobacco, smoking marijuana was associated with .. an approximately threefold increase in the amount of tar inhaled, and retention in the respiratory tract of one third more inhaled tar

What about the difference in smoking styles?

Significant differences were also noted in the dynamics of smoking marijuana and tobacco, among them an approximately two-thirds larger puff volume, a one-third greater depth of inhalation, and a fourfold longer breath-holding time with marijuana than with tobacco

This summary article talks about the cancer rates too.

For me, it raises the obvious question: what about vaporizers? One study I found is imperfect (no randomization, recruiting issues) but helpful for a baseline:

According to the American Lung Association:

when equal amounts of marijuana and tobacco are smoked, marijuana deposits four times as much tar into the lungs. This is because marijuana joints are un-filtered and often more deeply inhaled than cigarettes.

Not the answer you're looking for? Browse other questions tagged environmental-health marijuana tobacco .

21
Does smoking one joint give as much exposure to cancer-producing chemicals as smoking four to five cigarettes?

20
Is marijuana stronger now than it was in the 60s?
19
Does washing your hair with a coal-tar soap prevent hair loss and accommodate hair growth?
16
Are SWATs in the US mostly used for serving marijuana warrants?
20
Does marijuana impair driving?
13
Can smoking marijuana reduce the risk of cancer in cigarette smokers?
13
Does fetal tobacco smoke exposure cause permanent harm?
20
Does long-term marijuana use lead to a significant drop in IQ?
10
Does tobacco kill half of its consumers?