Was Hitler a vegetarian?

It is commonly believed that Adolf Hitler was a vegetarian. Sometimes that is used as some sort of argument-by-association that vegetarianism is a bad idea:

For example, "Vegetarians Are Evil" web-site:

Adolph (sic) Hitler would have been a model PETA activist. Adolph Hitler was a vegetarian - although it is widely known that in his early years he would have a lapse and indulge in the odd liver dumpling.

There are some, especially vegetarians, who claim this is not true.

For Hitler, there's no compelling evidence that he stuck with a real veggie diet for any appreciable length of time. Multiple sources document him as eating meat throughout the 1930's.

(Of course, I do not mean to indicate that Hitler being or not being a vegetarian would be an argument relevant to modern vegetarianism.)

TL;DR: It's complicated... Evidence shows that Hitler genuinely tried to become vegetarian in the early 30s, with some failings at times due to occasional consumption of ham, liver dumplings or some of the chefs adding meat without telling him.

Ian Kershaw - historian notable in particular for his biographies on Hitler and nazi Germany - published several references on Hitler's vegetarianism as early as 1924, per the book — Hitler, 1936-1945: Nemesis.

Chapter 7 - Mastery over the Movement

Hitler spent Christmas Eve 1924 at the Hanfstaengls’ in their splendid new villa in Munich’s Herzogpark. He had put on weight during his time in prison, and looked a little flabby. [...] [Hanfstaengl] noticed that Hitler had a good appetite during the meal of turkey followed by his favourite Viennese sweet pastries, but that he scarcely touched the wine. Hitler subsequently explained that he had begun on leaving Landsberg to cut out meat and alcohol in order to lose weight. He had convinced himself that meat and alcohol were harmful for him, and, ‘in his fanatical way’, went on Hanfstaengl, ‘finally made a dogma out of it and from then on only took vegetarian meals and alcohol-free drinks’.

Albert Krebs, the one-time Gauleiter of Hamburg, related a scene from early 1932 that reminded him of a French comedy. From the corridor of the elegant Hotel Atlantik in Hamburg he could hear Hitler plaintively shouting: ‘My soup, [I want] my soup.’ Krebs found him minutes later hunched over a round table in his room, slurping his vegetable soup

If the historical records indicate that Hitler was vegetarian started as far back as the early 30s, rumors of his diet were already spread at the time, see for instance the New York Times article: 'At Home with the Fuhrer.' 30 May 1937, available here.

We have a pretty recent testimony (December 2012) confirming the vegetarian diet from Elizabeth Kalhammer, one of Hitler's former maids. She got interviewed several times. Here is an article from Stripes:

"He was a vegetarian. He never ate any meat during the entire time I was there," Woelk said of the Nazi leader. "And Hitler was so paranoid that the British would poison him - that's why he had 15 girls taste the food before he ate it himself."

With many Germans contending with food shortages and a bland diet as the war dragged on, sampling Hitler's food had its advantages.

"The food was delicious, only the best vegetables, asparagus, bell peppers, everything you can imagine. And always with a side of rice or pasta," she recalled. "But this constant fear - we knew of all those poisoning rumors and could never enjoy the food. Every day we feared it was going to be our last meal."

I found additional details of her job from this source, spanning from 1942 onwards:

Margot Wölk, (born 27 December 1917), is a German former secretary who was one of 15 young women who, in 1942, were selected to taste German leader Adolf Hitler’s food at the Wolf’s Lair in East Prussia for some two and a half years in order to confirm that the food was safe to eat and didn’t contain any harmful toxins or poisons.

There is also this article from France24 reporting on a study done on Hitler's death done in 2017, which based a large part of its analysis on the teeth, noting:

"The analysis of Hitler’s bad teeth and numerous dentures found white tartar deposits and no traces of meat fibre. The dictator was vegetarian", Charlier said.

As such, there is strong evidence that he at least tried to be a vegetarian. There are, howevever, also plenty of reports indicating that it wasn't a 100% vegetarian diet, due to the occasional liver dumpling, and sometimes other people would screw up his diet. For instance, this BBC news reports on the testimony of one of Hitler's secretary, indicating:

Such things included his modest appetite, and the way he ate only side dishes - always avoiding meat.

His Austrian cook Kruemel believed that life without meat was not worth living, and would often try to sneak a little animal broth or fat into the meal.

"Mostly the Fuehrer would notice the attempt at deception, would get very annoyed and then get tummy ache. At the end he would only let Kruemel cook him clear soup and mashed potato."

To sum it up: it appears that Hitler was at least the majority of the time trying to follow a vegetarian diet, with some failings but not solely on his part. 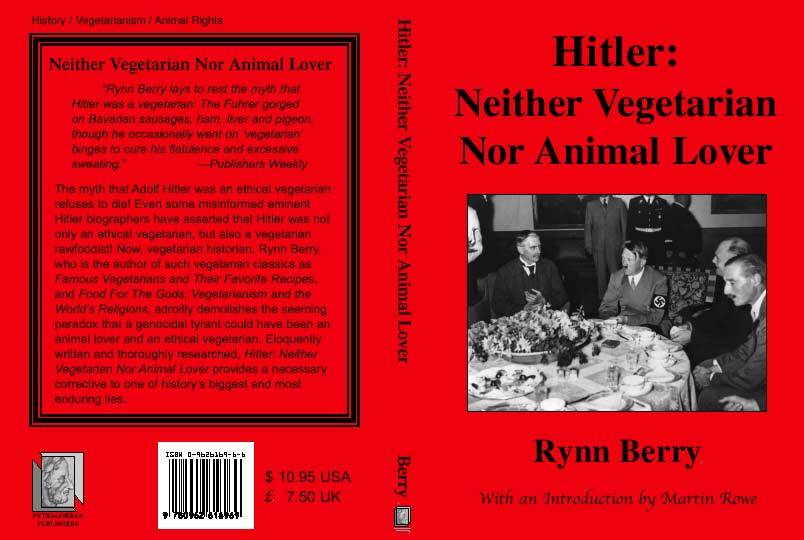 And, as you can see, Rynn Berry has written a monograph disproving the point, the full text of which can be purchased here for all the sordid details.

Robert Payne is widely considered to be Hitler's definitive biographer. In his book, Hitler: The Life and Death of Adolph Hitler, Payne says that Hitler's "vegetarianism" was a "legend" and a "fiction" invented by Joseph Goebbels, the Nazi Minister of Propaganda. According to Payne:

"Hitler's asceticism played an important part in the image he projected over Germany. According to the widely believed legend, he neither smoked nor drank, nor did he eat meat or have anything to do with women. Only the first was true. He drank beer and diluted wine frequently, had a special fondness for Bavarian sausages and kept a mistress, Eva Braun… His asceticism was fiction invented by Goebbels to emphasize his total dedication, his self-control, the distance that separated him from other men. By this outward show of asceticism, he could claim that he was dedicated to the service of his people. In fact he was remarkably self-indulgent and possessed none of the instincts of the ascetic.

Not the answer you're looking for? Browse other questions tagged history adolf-hitler vegetarianism .

10
Did Hitler ban round goldfish bowls because he thought they were cruel?

22
Did Hitler design the VW Beetle?
19
Was Hitler Jewish?
33
Did Hitler survive until 1962?
17
Was there a sex hormone plan to feminise Hitler?
24
Was everything Hitler did in Germany legal?
5
Is this quote by Adolf Hitler?
4
Did Hitler say: “My mother was an ordinary woman, but she gave Germany a great son”?