Did World War II propaganda posters tell people to "Speak American", rather than languages of the enemy? 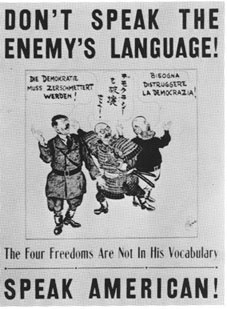 Wikimedia commons entry, claiming a citation to "Una Storia Segreta" by Lawrence Distasi. The licensing metadata from the picture claims that it is a "work prepared by an officer or employee of the United States Government as part of that person’s official duties". 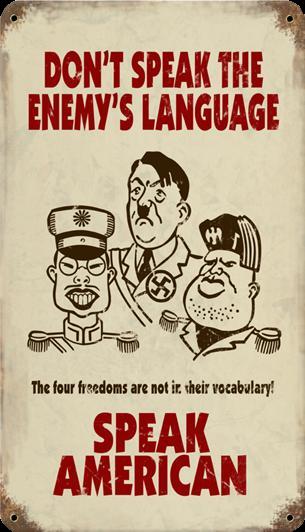 Were there World War II propaganda posters in the United States telling people not to speak German, Italian or Japanese, and to "Speak American"?

The Speak American Campaign was launched on October 12, 1942, with much fanfare in the white press. The Service Committee distributed and displayed posters and stickers admonishing the Japanese to "speak American," and committee members held community meetings to organize English-language classes for adults. In a radio address, Shigeo Yoshida explained the need to "speak American".

The war-time article Speak American by Shigeo Yoshida, principal Ala Maana School, can be found at that Hawaii Educational Review link:

THE "Speak American" campaign sponsored by the Emergency Service Committee has the endorsement and cooperation of military and civilian leaders. It is worthy of the support of all who need the admonition to "Speak American" or who are in a position to help such people learn and use the language of America. The idea of speaking English is not new. The schools and other educational agencies have been working on it for years. It is particularly important in Hawaii where we have many large groups of foreign-language-speaking people...

If this were Japan, which it is not and we know it will never be, the use of the English language would certainly not be tolerated as the use of the Japanese language has been here. That is one of the differences between the American and the Japanese ways of life. But we should not take advantage of the tolerance which is part of America by using the language of the enemy in situations where its use is not desirable or absolutely necessary...

And Shigeo Yoshida was correct, this was not new.

In the June 1920 Popular Educator, Vol. 37, there are photographs of posters:

The journal Primary Education November 1919, page 604 has a list Slogans for Better American Speech Week with patriotic and more general suggested slogans including:

Daughters of the American Revolution Magazine, Volume 54 says that between February 1919 and February 1920:

We also had posters printed containing the words, " Speak American." These are to be hung in public places. 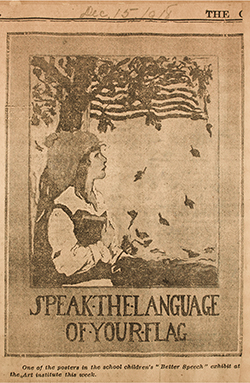 As far as the first poster in the OP, an Italian History Society link indicates in was provided by the Center of Military History.

A thesis gives a different source:

The book "Our House Divided: Seven Japanese American Families in World War II" by Tomi Kaizawa Knaefler, published in 1991, had the following:

The government posters said, "Speak American. Don't Speak the Enemy's Language." So I frustrated my mother terribly by speaking English to her, disregarding the fact that she, like the other issei, communicated primarily in Japanese.

Which suggest that there were some posters out there with the message of speaking American. Not necessarily those two photos, but they did exist.

However, it's possible that the second photo is fake.

http://commons.wikimedia.org/wiki/Commons:Deletion_requests/File:Speak_American_WWII.jpg is a deletion request for a supposed poster saying "Speak American":

Appears to be a modern commercial recreation (I see it's being sold as a metal sign, for example), and it's not just a direct copy of a WWII era US government poster, so not PD Afiler (talk) 23:19, 24 November 2011 (UTC)

To maybe slightly better answer your question, the typeface used is a modern computer typeface, and the caricatures seen there are an entirely different drawing as in the blurry image above. The bottom line is that there's no evidence at all that this is a US government work, only that it uses the same "Speak American" text as a poster reproduced in book that claims it's a US government work. - Afiler (talk) 11:22, 26 November 2011 (UTC)

The second photo in the question was being sold as a metal sign, so it's quite possibly referring to that photo.

2
Did former president Woodrow Wilson extensively rely on Napoleon Hill's work during the World War?
8
Did more than 10 million people get health insurance due to the Affordable Care Act (Obamacare)?
18
Did Ehrlichman claim the reason for the Nixon drug war was to criminalize black people and hippies?
23
Were American female soldiers in Iraq or Afghanistan more likely to be raped by their fellow soldiers than attacked by the enemy?
79
Did more people use the DC Metro transit system on the day of Trump's inauguration than on the day of Obama's second inauguration (in 2013)?
16
In the 1910s and 1920s in the US, did some people face death by government officials for challenging "industrial capitalism in American society"?