Does majority-white and majority-republican Owsley county have the highest SNAP usage?

Just saw this one shared on Facebook by Occupy Democrats with 79k+ likes. It's a repost of this by Less Than 10 Dollars an Hour. 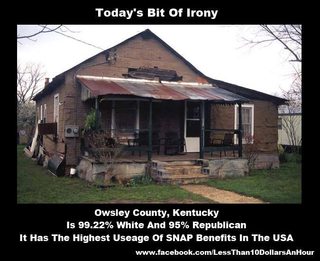 It has the Highest Usage Of SNAP Benefits In the USA

Unless there are more recent statistics on SNAP usage than the official statistics available from the US Department of Agriculture or someone has a very creative definition of "highest useage", the statement is false. If we go back a few years, the statistics may however back the claim.

In the statistics, there are two different values, which both could be described as "usage" in a colloquial language. One value is the ratio of the population receiving SNAP benefits, the other value being the average benefit amount per inhabitant.

If we look at the average payment per inhabitant, Owsley is even further down the list. The statistic contains however some very strange numbers, which seem erroneous to me. E.g. Hopewell City, VA with a population count of 22655 allegedly received $243,376,900 in SNAP benefits in 2010, making an average monthly payment per inhabitant of $895.23, or per participant of $3,051.67.

There's another issue this question doesn't address: the 95 percent Republican part of the equation.

The number of voters who cast ballots for Obama in 2012 must be considered as a subset of the number of people who voted, not as a percentage of the population as a whole.

There are three claims here,

So had the percentage of Republicans been 76% rather than 95% I'd have said it was true. As it sits, it's only MOSTLY TRUE.

And, the graphic doesn't seem to be from the county, but I kind of figured it was a stock image anyway.

Not the answer you're looking for? Browse other questions tagged united-states race poverty .

2
Are these claims about Owsley County, KY factual