Inhaling helium and talking with a funny voice used to be a great party trick for chemists with access to it and has now become more popular as helium supplies have become accessible for filling balloons.

But claims are being brought forth that helium inhalation is dangerous. This BBC story claims a teenager died from it.

Members of the public will be more familiar with the usually harmless and not uncommon party trick, of inhaling helium from a balloon to a high-pitched squeaky voice.

It must be recognised that such activity can, on rare occasions, lead to adverse health effects and some deaths have been reported.

Breathing in helium displaces oxygen from the lungs which in turn, deprives vital organs of essential oxygen.

But if helium is the most inert element, how can it be deadly, and if so, why?

Helium inhalation rarely causes negative effects in the long term, as the gas is inert and can't bond to haemoglobin within the blood (diffusional hypoxia - a common cause of illness after inhaling other gases).

Because, generally speaking, a person inhaling helium does so from a balloon, the loss of consciousness will usually result in the restore of the oxygen supply, it's not usual to suffer ill affects from Helium. If a person were in an atmosphere of helium, or if they were somehow attached to Helium delivered by a mask, this can lead to complete asphyxiation, and death from Hypoxia (lack of oxygen to tissues within the body).

Importantly though, inhaling Helium can on rare occasions cause the formation of a Gas Embolus (a blockage in a vein caused by the presence of a bubble of gas), which can easily kill, or cause significant damage. The risk is increased if the Helium is increased from a pressurised source, rather than inspired by the person because a pressurised source can caused injury (barotrauma) to the pleura of the lungs, leading to Helium building up in the lungs. Technically this could actually cause a pneumothorax (collapsed lung) but this would be rare.

This is notably different to inhalation of some other gases which people also deliberately inhale, such as Nitrous Oxide, which is popular in some European holiday destinations. Nitrous Oxide will cross the alevolar wall by diffusion, and will bond to Haemoglobin in the blood, which displaces the ability of this haemoglobin to bind to oxygen instead. This affect is called Diffusional Hypoxia, and can kill because, even after inhalation stops, the ability of haemoglobin to carry oxygen takes time to restore.

The short version is, it rarely causes any harm, but a on unlucky occasions it will, and this could be fatal.

Yes helium can be dangerous, but usually because of other risky behaviour associated with taking it

Statistically speaking it looks as though helium is associated a small, but increasing number of deaths. The following picture is based on mentions of helium on English death certificates (original source this tweet): 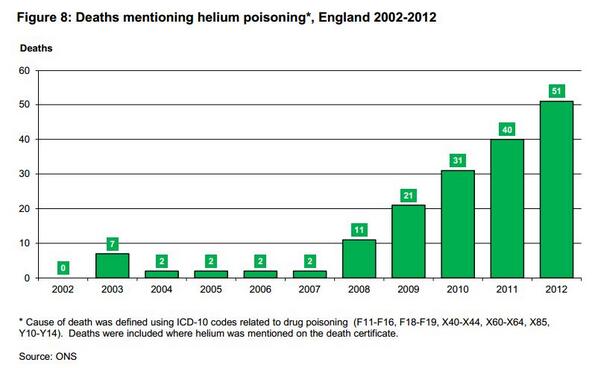 But this doesn't help understand whether the problem is that the gas was helium or whether the users were doing something else that created or exacerbated the risk. Since helium is inert and doesn't have any direct physiological affects (though there are some small positive effects, see next reference) it is a little implausible that it is the direct primary cause of death. Helium is used safely in medicine and deep sea diving in gas mixtures that also contain oxygen.

Of course, pure helium will displace oxygen leading to potential asphyxiation. But it isn't obviously easy to achieve that just by breathing it from a balloon. If you inhale enough to become unconscious, you won't breathe any more of the helium and the worst risk is likely to be related to fainting. As soon as you fall you are in air and will regain the required supply of oxygen on refilling your lungs. As this Slate article explains:

You don't have to worry about fatal asphyxiation if you're sucking from a helium balloon at a party. At worst you'll keep going until you get lightheaded and pass out—at which point you'll stop inhaling helium and your body's oxygen levels will return to normal. Of more concern is the possibility that you'll hurt yourself when you fall down.

Industrial accidents involving asphyxiation usually involve closed spaces filled with inert gas. If you faint in one of these, you are still in the dangerous, airless environment and will die quickly if not removed (see this example). It isn't easy to achieve this with helium as it is less dense than almost every other gas so will only fill spaces enclosed that are sealed completely or at the top. It has been done, though. Two students won a Darwin Award for dying after climbing into an 8' helium filled balloon in florida (reported here). In this case, though, monumental stupidity deserves a larger share of blame than helium.

There is another direct risk from trying to inhale helium, but again it isn't the helium that is the problem but the inherent risk of any compressed gas supply. As this bulletin from the Compressed Gas Association explains:

How can a healthy young person be killed by a seemingly harmless substance, you ask? Postmortem examinations of victims explain what occurs, while engineering analysis explains how.

Chemical reaction does not cause fatal injuries. Rather, the pressure of gas inside the lungs is the agent that can kill instantly. Autopsies show that the alveoli (air sacs) in the lungs have been ruptured. Death follows immediately, as the victims literally drown in their own blood. Under such circumstances, cardiopulmonary resuscitation is of no avail.

So, strictly speaking, the risk is gas pressure not helium.

There is no physiological effect of helium that makes it risky to inhale.

But, if the user can contrive a situation where the helium completely displaces air, asphyxiation is possible. So don't climb into gas filled balloons or put bags over your head (these are bad ideas whatever the gas.)

Don't breathe any gas direct from the compressed supply, that is very risky because of the effect of uncontrolled pressure on your delicate lungs.

If you must inhale, do it from a small balloon in a room where you won't hurt yourself if you fall and where other, sober, people are present. The risks here are very low.

Not to dispute any of the other answers, but it may be worth noting that saturation divers breathe a mixture of helium and oxygen regularly, as helium does not have the same effects as nitrogen (neither the "nitrogen narcosis" cognitive effect and it desaturates from the blood stream faster).

What is saturation diving?

When in saturation the divers breathe a mixture of helium and oxygen (hence Mixed Gas), which saturates their body for the duration that they are at pressure (hence saturation).

As reported in Frontline (http://www.pbs.org/wgbh/pages/frontline/suicide-plan/) inhaling helium is a popular way for assisted suicide organizations to help people die. A crude plastic hood is placed over the subject's head to induce suffocation while a tube connected to a helium tank pumps in helium. This gas is chosen because according to the organization it promotes a peaceful death experience. The use of helium in this manner may help explain the rise in helium-related deaths in the graph shown above.

This is not to say that the gas is dangerous in and of itself in lower inhaled amounts.

The other answers handle the gas involved very well. They don't, however, cover one important aspect: You also need to consider the container which houses the helium, and how it was filled.

Most gas containers are not perfect, and they sometimes contain tiny metal fragments inside. Unless there is a fine filter on your helium container, those metal fragments will likely get expelled and stuck in your lungs, permanently.

Think of it like sexually transmitted diseases: The source of the metal fragments can come from your container, or any upstream container that filled it if it wasn't, ummm... "wearing" a filter.

Not the answer you're looking for? Browse other questions tagged medical-science safety .