Some people claim that the fossils that have been generally classified as Neanderthal are actually human, and in particular, humans who have lived to a very old age - i.e. two or three hundred years old.

They further claim that the bones in the human face continue to grow and change long after maturity, albeit, much slower than when children. So the bones in the face of a two or three hundred year old person would look a lot like the so-called Neanderthal skulls.

This claim is used to support Young Earth Creationist views.

Here are a few examples where this is mentioned:

Jack Cuozzo, who was the first to radiograph Neanderthal fossils in modern times, postulated that the unusual skeletal structures may actually be the result of extreme longevity.

The bible describe people in the early parts of Genesis that lived for hundreds of years. One of the things that we have learned from modern science is that the bones of the head and face continue to grow through our entire adult life (though at a slower rate than when we are children).

What would the faces of people who lived for hundreds of years look like? Dr. Jack Cuozzo has studied both the Bible and the Neanderthal remains in depth, he believes these people would look like (and consequently are) the Neanderthals.

It seems to have all started with Dr. Jack Cuozzo, who wrote a book titled "Buried Alive: The startling truth about Neanderthal Man".

Is it scientifically plausible that Neanderthal skulls are actually the skulls of humans that lived for many hundreds of years in Biblical times?

No they are clearly not very old homo sapiens. The hypothesis of Dr. Cuozzo completely fails to explain the following evidence (and more).

Neanderthal DNA has been mapped multiple times and it is distinguishable from Sapiens DNA. While it is clear that Neanderthals and Sapiens share a lot of DNA, it very evident from DNA sequencing that there are a number of Neanderthal-specific genes.

Comparison with the human and chimpanzee genomes reveals that modern human and Neanderthal DNA sequences diverged on average about 500,000 years ago. .

--Analysis of one million base pairs of Neanderthal DNA

This Neanderthal fossil was of a 3 years old:

This study combines traditional methods of assessing dental developmental status based upon modern human standards with new techniques based upon histological observations in order to reassess the age at death of the Gibraltar child from Devil's Tower. The results indicate that the most likely age of this individual at death was 3 years of age.

--Age at death of the Neanderthal child from Devil's Tower, Gibraltar and the implications for studies of general growth and development in Neanderthals

Here we use computerized fossil reconstruction and geometric morphometrics to show that characteristic differences in cranial and mandibular shape between Neanderthals and modern humans arose very early during development, possibly prenatally, and were maintained throughout postnatal ontogeny.

--Neanderthal cranial ontogeny and its implications for late hominid diversity

It is suggested that the unique facial topography of the classic Neanderthal be viewed as stemming from a change of much of the infraorbital region from the coronal orientation of the generalized face to a more sagittal orientation. This reorganization renders the infraorbital facial plates more efficient in opposing the rotation of the snout in the sagittal plane, which in turn is generated by the unusual use of the anterior teeth. The triangular shape that the “sagittally” oriented infraorbital plate assumes is considered the result of its greater efficiency in opposing the rotation of the anterior part of the face. Both the shift from the coronal into the sagittal orientation and the reshaping of the bone plate into a triangle with a specific anteroposterior length to achieve optimal proportions act to produce the unusual mid-facial prognathism in the Neanderthal skull.

--The Neanderthal: A new look at an old face

Find out more at the Neanderthal Anatomy wikipedia page

In fact, the age of death of fossilized Neanderthals is so well studied that we have statistical studies. There was a higher-than-expected mortality among prime-age adults which is a little beyond the point. The point here is that most of the fossils we have of Neanderthals are determined to be much younger than any definition of "elderly". Here is the abstract:

Consideration of the mortality distributions of 206 European and Near Eastern Neanderthals (40 associated skeletons and 166 isolated elements), compared to those of 11 Recent human ethnographic and palaeodemographic samples and two non-human mammalian samples. indicate that there is a clear representational bias in the total sample, with too few infants and older adults plus too many adolescents and prime-age adults. Manipulations of the Neanderthal data produce immature mortality distributions within the ranges of the Recent human samples, but they maintain the high prime-age adult and low older adult mortality.

The following are the mortality patterns according to the article. You can see that most are in the young adult category or younger. 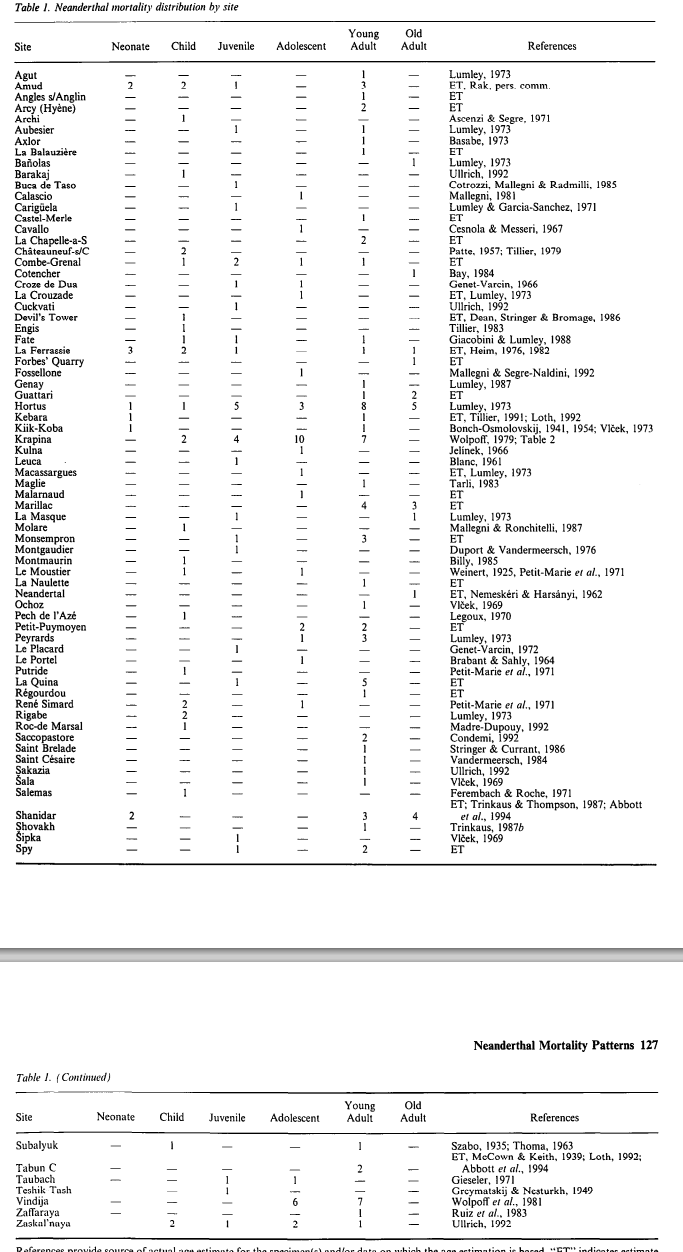 Since Dr. Cuozzo is a creationist, and makes the claim within a creationist context, I'd like to also present evidence that we measured some Neanderthals to be 600,000 years old, way older than the presupposed 6,000-10,000 years of age of the Universe that is postulated by Young Earth Creationists. The Neanderthal fossils can not be remains of Biblical "multi-centenaries" simply because they are way, way older than the Bible and its characters, besides being clearly non-sapiens.

Not the answer you're looking for? Browse other questions tagged medical-science bible paleontology young-earth-creationism .

4
Did Homo sapiens have children with Neanderthals?

35
Are we eating too many carbs? And do we need to switch to the primal/paleo diet?
27
Does the Torah-encoded age of the universe match science?
23
Did the biblical King David exist?
8
Are vets legally allowed to treat humans?
2
Are there no identical human bones found in any pre human fossil records?
17
Did Richard Nixon commission a study on the effects of THC and then have the results classified?
9
Drinking 3 glasses of milk per day doubles a woman's chances of death?
9
When the WHO/CDC/NIH recommended wearing cloth masks, did they cite any scientific paper supporting their effectiveness?