Is the Texas Chupacabra real?

There have been reports in Texas in 2004 of a creature that looks like a dog which attacks and sucks the blood from livestock.

Do any of those claims have any validity?

For simplicity I'm going to call the creature being asked about the Texas Chupacabra, to differentiate it from the other creature dubbed the Chupacabra that was first reported in Puerto Rico in 1995.

There's a lot of buzz north of San Antonio in the city of Blanco where the body of what's being called the legendary chupacabra has turned up.

It's the latest in a number of sightings and captures of the strange animals bearing similar resemblance.

Ayer is preserving the frozen carcass that was found by one of his former students in Rosenberg, Texas, located about 40 miles southwest of Houston. The animal looks gray with leathery skin, unlike anything that is native to Texas.

As you may recall, in July 2007, the pictured animal (see directly below) was hit by a car and killed on Phylis Canion’s property, on Buenger Road off U.S. Highway 183 south of Cuero, Texas. Canion had said she saw this “animal” for two years roaming her property. 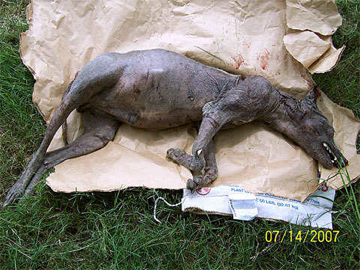 A strange animal, suspected to be the legendary chupucabra, has been spotted in a Texas town. 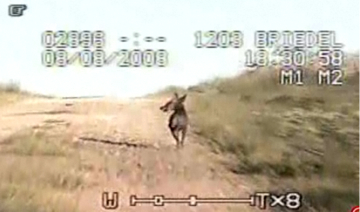 Undeniably, these are real animals. But are they a species that was not known to science until recently? Researchers at Texas State did a DNA analysis of the 2007 Cuero corpse, and they found:

“The DNA sequence is a virtually identical match to DNA from the coyote (Canis latrans),” said Mike Forstner of the biology department at Texas State. “This is probably the answer a lot of folks thought might be the outcome. I, myself, really thought it was a domestic dog, but the Cuero chupacabra is a Texas Coyote.”

“DNA tells a story. It allows us to determine the difference between animal species, and while I thought it was a canid (one of the members in the dog family), I could not tell from the photographs which one it might be,” Forstner explained, pointing out that KENS 5 financed the testing. “From my perspective, we were interested in providing a direct answer from the DNA, testing the best guesses of experts by using the evidence from the animal itself.

“Jake extracted DNA from the sample, then we used PCR to generate template DNA and a Beckman Coulter Automated DNA sequencer to read that sequence,” he said. “We choose a part of the mitochondrial DNA genome that is very informative in mammals, called the D-Loop. Once we had the sequence, it was very easy to make an initial ‘match’ of the Cuero sample using the online genetic database, GENBANK. We also completed other analyses, but really, that first match told the tale.”

The main mystery might be solved, but the DNA match doesn’t explain the other looming question: Why does this coyote look so un-coyotelike?

(For what it's worth, the finder of the 2007 Cuero Chupacabra disagrees with this assessment.)

Other Texas Chupacabra corpses have been found to be dogs, dog-coyote hybrids, and even raccoons.

The hairlessness seems to be a separate issue, and one that can't find nearly as much material on it as I'd like. Part of the problem seems to be that once the creatures are identified as mundane animals everyone loses interest in them. Mange is often cited as a reason for the hairlessness, which sounds credible. The problem is I can't find an example of an expert actually examining one of the corpses and finding evidence of mange. Maybe mange is hard to prove? I'm not sure. Occasionally the experts even go out of their way to say the dead animals didn't have mange:

Researchers suspect the hairlessness is due to a congenital defect, not disease. Game warden Penny Nixon wants to emphasize that point.

"This is just an anomaly of a common species," she said. "We don't want anyone alarmed by it. We don't want people to think we have a mange problem or any kind of problem in our wildlife in Wise County."

If anyone knows more about the mange issue, please post another answer.

In short, the Texas Chupacabra is not so much a zoological phenomenon as a social phenomenon. These are unusual examples of usual animals that get lumped together under the label "Chupacabra." As I mentioned at the head of my answer, the Texas Chupacabra is a very different beast than the Puerto Rico Chupacabra, which pre-dates the Texas version by ten years. The identification of these strange specimens as "Chupacabra" is no doubt inspired by the publicity that the Puerto Rico phenomenon garnered, but the beasts being described in each area are almost completely different.

Interestingly, this is not the first time that a cryptozoological animal has jumped a geographical divide and changed into something very different in process. When reports of the Yeti were first made in the 1920s the general consensus was that it was an unknown species of ape because of its ape-like tracks, but when reports and footprints of "America's Abominable Snowman" (as Ivan T. Sanderson dubbed Bigfoot in a seminal article) began showing up in America in the 1950s it had become a far more human creature.

Not the answer you're looking for? Browse other questions tagged cryptozoology .