Do the Jewish control a larger proportion of U.S. wealth than their proportion in the population?

While only 3% of the population, the Jews control over 25% of the nation's wealth and this percentage rises every year.

The short answer: Yes, self-identified Jews have, on average, higher household incomes in the USA than other religious groups, with Hindus only slightly behind. Drawing strong conclusions from this correlation is dangerous.

(Watch out! This answer includes a tiny bit of misdirection. The question was about wealth, but the answer is about income because it was the best I could find. Wealth and income aren't exactly the same, but they are pretty tightly related, so I think the answer should still be acceptable.)

They have a chart showing the results of income distributions. 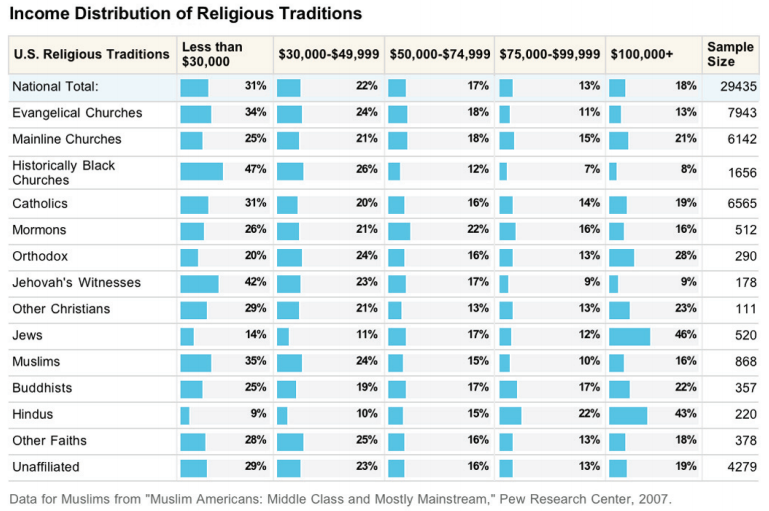 (This chart has been turned into an infographic which I find doesn't help very much, but you may prefer it.)

From this chart, you can see that Jews have the highest proportion of household income of greater than $US100,000. Similarly, they are the second-least-likely to have household incomes of less than $US30,000, after Hindus.

Antisemitic sites, such as Stormfront, use data like this to conclude that there is a Jewish conspiracy. This is not a safe assumption, due to a large number of potential confounding factors (ignoring the innate difficulty/impossibility of having a conspiracy of that size.)

My goal here is not to prove that any of these potential confounding factors are true or relevant, just to give context to the bare facts before they are used to make dangerous conclusions about conspiracies.

A partial answer in addition to Oddthinking's.

Is only 3% of the population Jewish?

Jews are about 2% of the U.S. population, fewer than many people guess.

A Statistical Portrait of American Jews into the 21stCentury

This article claims/shows that 25% to 35% of US billionaires are Jewish.

Here’s my count of Forbes Israel‘s list, with Jewish billionaires as a fraction of the country’s total number of billionaires:

Not the answer you're looking for? Browse other questions tagged history united-states economics .

21
Are more people accidentally killed by doctors than accidentally killed by guns and traffic combined?
37
Are Elie Wiesel and Lazar Wiesel the same person?
12
Do the world's eight richest people have as much wealth as the poorest 50%
37
Did fewer Jews die of the Black Plague because of ritual washing?
4
Are 11.6% of world's billionaires Jews?
4
Did Richard Nixon say, “Jews think they can run the world”?
1
Did Henry Ford say, “Jews control the business…”?
5
Did the Israeli paper Ma'ariv run an article titled “The Jews Who Run Clinton's Court” in 1994?
7
Did the wealth gap shrink under Trump (pre-pandemic)?
26
Would the median household income in the USA be $140K and mean net worth $800K if wealth were evenly distributed