Can maggots live in your digestive system?

I was reading several articles about Casu Marzu, a kind of Sardinian cheese delicacy that is infested with maggots. 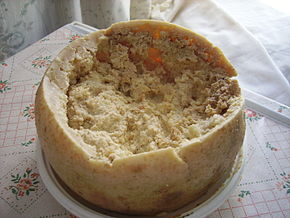 Many websites claim that these maggots may pass through the digestive tract alive because human stomach acids are unable to kill them, and may even infest one's intestines.

Yes, maggots can infest the digestive tract of humans.

I was able to find a number of articles describing this condition:

Gastrointestinal Myiasis by Larvae of Sarcophaga sp. and Oestrus sp. in Egypt: Report of Cases, and Endoscopical and Morphological Studies - Korean Journal of Parasitology

Four cases of gastric or intestinal myiasis are reported. The cases contain 2 males (1 child 10 years old, and 1 adult 40 years old) and 2 females (1 girl 18 years old, and 1 adult 50 years old) from Minia Governorate, Southern Egypt. Three of them, including cases no. 1, 3, and 4, were gastric myiasis, and complained of offensive hematemesis of bright red blood. Minute moving worms, larvae of the fly, were found in the vomitus. On the other hand, case no. 2 had intestinal myiasis, and complained of abdominal distention, nausea, vomiting, and diarrhea. The stool of case 2 was mixed with blood, and minute moving worms were observed in the stool.

In June and August 1984, the mother of a 12-month-old Washington girl periodically observed "moving worms" in the child's stool. The child was asymptomatic. She was treated by her physician for a presumptive diagnosis of pinworm infection, first with pyrvinium pamoate and then with piperazine. However, the mother continued to see "worms" in the child's stool. In early September, fly larvae (maggots) were seen in each of two stool specimens collected on different days. These larvae were identified as living third-instars of Muscina stabulans, the false stable fly.

GASTROINTESTINAL MYIASIS, REPORT OF A CASE - Archives of Internal Medicine

The literature contains numerous reports of infestations of the ear and nose and of external wounds, but those of the gastro-intestinal tract are comparatively rare, there being but sixty-three cases reported to date. Of these, twelve were caused by Fannia canicularis or the black flower fly, eleven by Musca domestica or the common house fly, four by Fannia scalaris, six by Sarcophaga or the flesh fly, three by Piophila casei or the cheese maggot fly, twelve by Eristalis tenax or the drone fly ...

29
Can ants lift 50 times their weight?
63
Does swatting/killing a bee cause the hive to attack?
35
Can cockroaches survive a nuclear war?
7
Do wasps and yellow jackets leave pheremones that attract them to return to old nests?
11
Can a house spider survive being vacuumed up?
9
Can butterflies break off tree branches?
20
Is it unhealthy to live with cockroaches?
20
Does flour or rice make an ant's stomach explode?
15
Are artificial sweeteners useful as insecticides against ants?
35
Can you cause mosquitos to explode from drinking too much blood by flexing your muscles?